Transnational corporations are demanding the right to what they call “competitiveness”: lower taxes, control over lawmaking, and the right to sue governments for affecting profits. In her new book, Shadow Sovereigns: How Global Corporations are Seizing Power, Susan George shines a light on the secret corporate coalitions that are influencing critical government decisions and posing a direct threat to democracy. Get your copy by making a donation to Truthout today!

The following is an excerpt from the introduction to Shadow Sovereigns: How Global Corporations are Seizing Power:

Everywhere you look you find masses, droves, gangs of unelected, unaccountable, profit-oriented indi­viduals, corporations and new institutions surfacing everywhere, making official policy in areas ranging from public health to food and agriculture; from taxes to finance and trade. Some are lob­byists for particular private companies or for entire industries, others executives of the world’s largest businesses, often with a turnover much greater than the Gross Domestic Product (GDP) of many of the countries where they operate; more and more often, the entities they have created have become quasi-governmental bodies cooperating across national frontiers.

Their role is overtly political and they exercise illegitimate power. They work through lobbies but also directly through governments – not just by convincing elected officials to pass this law or that one, but also through obscure ‘expert commit­tees’ or ad hoc bodies whose quiet ‘mission creep’ may gain them official standing. Their activities may be carried out for the benefit of a single company or for an entire industry.

Sometimes they form their own powerful international organizations with large budgets devoted to intervention in world affairs. They have become expert in the careful preparation of strategic trade treaties to be negotiated in secret but under the constant sur­veillance of corporate delegates.

They’ve got ordinary citizens under their broad thumb, an appendage also used to thumb their noses at the public interest and the common good. Throughout North America and Europe in particular, this corporate spawn is spearheading an important political shift that I call the ‘rise of illegitimate authority,’ and the constellations of organized interest groups constitute a genuine threat to democracy.

….government in the usual sense, carried out by clearly identifiable, democratically elected officials, is gradually being eroded, sometimes even supplanted by shadow ‘governments’ to which these officials have made huge conces­sions. This may happen by choice, because officialdom is scared of the giants or admires and wants to pander to them. To be more generous, the bureaucrats and leadership may simply be blind to the long-term implications of their choices. In any case, they have handed over substantial power to these behemoths that now make decisions in innumerable areas that affect our lives.

I’ve chosen to call these giant corporate actors ‘transna­tionals,’ or ‘TNCs,’ rather than ‘multinationals,’ which many people use; first, because TNC is the official United Nations usage; more importantly, because the executives who occupy the upper, strategic levels of the largest companies are usually natives of the same country as that of their international head­quarters. The companies they run are certainly ‘multi’-national in the sense that they have offices, sales and production facilities in a ‘multi’-tude of countries, but their top people retain their most relevant family, social, political and cultural connections in the country where they were born and brought up. They understand how to operate there and have easier access and closer relationships with the government. They will lose less time getting things done in the corporate interest.

For such reasons, the CEO, COO, CFO – Chief Executive, Operations or Financial Officers – like the heads of R&D or executive board members, are more likely to be nationals of the headquarters country than to be foreigners, even nearby foreigners. In this sense, even among the largest corporate enti­ties, Nestlé is Swiss, Total French, General Motors American and Siemens German, no matter how many countries they may operate in.

Perhaps locals are also considered potentially more loyal, although to succeed in the business world such virtues as patri­otism or loyalty are necessarily reserved for the company itself. Top executives have scant concern for the ultimate fate of any of the countries where the company has facilities, including their own. If higher profits demand it, they must and will readily close down plants or sack workers, whether fellow-citizens or not. 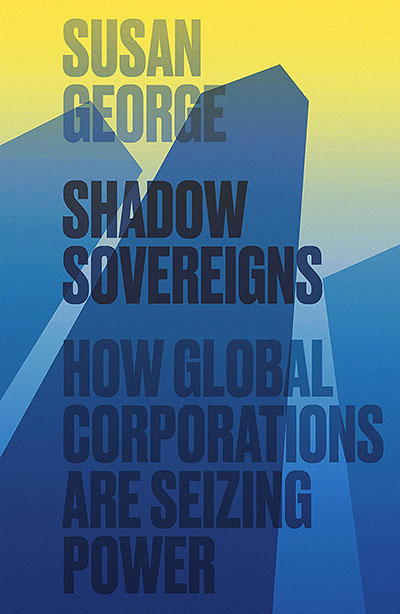 Caption: (Image: Polity Books)​Since the onset of neoliberal politics at the beginning of the 1980s, which accelerated at the end of the Cold War in 1991 when the Soviet Union disappeared, the number of TNCs has soared. Globalization has given wings to the giant corporations and helped them to create their own meta-organizations to deal with particular world spheres such as trade and the environ­ment. Other outgrowths are both ‘meta’ – above or beyond in Greek – and ‘mega’ – great or powerful – such as the World Economic Forum (WEF), better known by the name of the Swiss skiing resort where since 1971 it has met yearly: Davos. The growing ambition of the Davos cluster of organizations can be simply defined: to run the world.

I call the WEF habitués the ‘Davos Class’ because they constitute a genuine social class with the usual attributes expected thereof. The people that make up this class are thus international and nomadic, but they are also a recognizable tribe with their own codes and markers. They have their own languages, not just their native one plus corporatese, but also fluent English. They attended the same or similar universities and business schools, send their children to the same or similar private schools, favor their own watering holes and vacation spots, possess upscale homes in various sophisticated world-class cities, frequent the same meetings (with Davos a must), develop comparable corporate cultures and, of course, have plenty of money.

They are also replaceable – if the man you met in Davos last year is not there this year, then he is no longer President of Bank X or Board Chair of Corporation Y. About 85 per cent of the Davos denizens come from corporations and banks – most of the rest are politicians and there is a smattering of trade unionists, a few acceptable, non-wave-making NGO (nongov­ernmental organization) people and, for glamour, the occasional movie star.

Unless and until proven wrong, I don’t believe in conspira­cies, but I definitely believe in interests – and that readers are fully capable of distinguishing between the two. A paranoid tale of conspiracy and a factual description of growing corporate power are quite different, even though the latter’s signs are all around us and may be difficult to discern for the average person. I hope to provide some clues in these pages. One could write volumes about the TNCs, and the volume of information, alas, grows daily. My goal here is to open the door, not to visit every nook and cranny of the enormous transnational power house.

Before we enter, it’s perhaps useful to speak a little about politics in the broadest sense. My chosen subtitle was to have been ‘The Rise of Illegitimate Authority,’ and it’s only honest to devote part of this introduction to my motivations and the politics I hope to defend through a factual description of what the TNCs are up to. Like virtually all my work, this book is about power – who has it, how they use it and to what ends. The power of the TNCs is grounded in the spoken or unspo­ken ideology known as neoliberalism which is itself profoundly anti-democratic. I want to spell this out and will make some brief distinctions between which authority is legitimate and democratic and which isn’t. These may seem obvious, but are also often hidden. Readers will already be well aware of the principles involved.

Then I’ll explain why I believe that evidence shows illegiti­mate authority to be on the rise and democracy to be in serious danger of succumbing to the neoliberal disease. This book con­cerns the United States and Europe because that is where the great majority of corporations are headquartered and because Westerners live where this ideology is most entrenched. We are confronted by a battle between two models of thought and behavior. Now we have reached the point where we must choose between the Enlightenment heritage developed since the eighteenth century, on the one hand, and, on the other, what I see as the Great Neoliberal Regression. The Enlightenment tradition is losing, and since I’ve dealt with this subject more thoroughly in earlier work, this description will be short.

The rest of the book will provide concrete examples of how the functions of legitimate government are progressively being taken over by illegitimate, unelected, opaque agents and organizations. Here the list is constantly lengthening.

Copyright (2015) by Susan George. Not to be reprinted without permission of the publisher, Polity Books.