Though the economy is slowly recovering from the Great Recession, large swaths of the American public are still bogged down by joblessness, underwater mortgages, and falling incomes. In fact, “between June 2009, when the recession officially ended, and June 2011, inflation-adjusted median household income fell 6.7 percent, to $49,909.”

But as the Roosevelt Institute’s Mike Konczal pointed out, 2010, the first full year of the recovery, was very good for America’s richest 1 percent. In fact, that year the richest 1 percent captured 93 percent of the nation’s income gains:

Well, we finally have the estimated data for 2010 by income percentile, and it turns out that the top 1% had a fantastic year. The data is in the World Top Income Database, as well as Emmanuel Saez’s updated Striking it Richer: The Evolution of Top Incomes in the United States…The takeaway quote from Saez should be: “The top 1% captured 93% of the income gains in the first year of recovery.”…The bottom 90% of Americans lost $127, the bottom 99% of Americans gained $80, and the top 1% gained $105,637. The bottom 99% is net positive for the year because of around $125 in average capital gains. They can take comfort in efforts by the Right to set the capital gains tax to 0%, which would have netted them an addition couple dozen bucks.

This chart shows that, even discounting capital gains (which are overwhelmingly made by the very rich), the very richest Americans have seen the fastest bounce back in terms of income (the blue line is the richest 0.1 percent, while the red is the richest 1 percent): 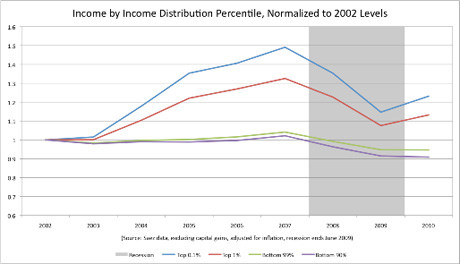 During the slow recovery, corporate profits have already roared back to their pre-recession heights. Wages, however, have yet to follow suit, leaving the 99 percent to struggle as the 1 percent enjoys a real recovery.