Now that Bernie Sanders has brought forward his progressive agenda, including real health care reform through a single-payer universal Medicare for all program, the knives are out from the Republicans as well as Hillary Clinton to distort and discredit this option with false information.

Going forward, we have three basic alternatives to further reform our health care system: 1.) continue with the Affordable Care Act (ACA) with improvements as needed (which Clinton supports with barely a hint of what those changes might be); 2.) the Republican “plan,” including repeal of the ACA and emphasizing market-based “fixes”, such as health savings accounts, selling insurance across state lines, and further privatization of both Medicare and Medicaid; and 3.) National Health Insurance (NHI) through a Medicare for all plan, as currently embodied in HR 676, legislation pending in the House of Representatives.

Let’s cut through the smoke and mirrors of the debate and compare each alternative in terms of costs, affordability, and what we get in terms of access, quality, and sustainability.

First, looking at costs, we have experience with market approaches to cost containment over the last three-plus decades – none have worked tocontrol either costs or prices. The ACA, with virtually no price controls, has given us, with various government subsidies, six years for private insurers, hospitals, drug companies, and others in the medical-industrial complex to expand their markets with minimal oversight.

Private healthinsurers have bulked up, consolidated, gamed the new “system” for profits and shareholder returns even as they complain of not making enough money and threatening to withdraw from the ACA’s exchanges. (1) The CEO of the largest insurer, UnitedHealthcare, Stephen Hemsley, pocketed $66.1 million ($254,328 per day) total compensation in 2014. (2)

Republican policies have accelerated privatization of Medicare and Medicaid, adding higher burdens of administrative overhead and profits at public expense. Their policies are based on the concepts that markets can fix our problems and patients’ demands are at the heart of inflatinghealth care costs. Hence their reliance on “consumer directed health care,” with its high-deductible, low-value policies which have failed for many years.

You can’t believe most of the claims that are being made about the costs of single-payer NHI. Clinton is saying that the middle class will be hit with a big tax increase without mentioning what patients and families will save and get with NHI. She says that Sanders’ numbers for savings for typical American families under NHI “don’t add up.” (3) Some economists are also jumping on the bandwagon to discredit NHI. Paul Krugman, still thinks it is “not politically feasible” because of the political and economic power of the medical-industrial complex, and worries about “disruption for patients” with the ACA, but doesn’t acknowledge the huge gains that NHI would bring with far more efficiency than our current multi-payer system. (4) Economist Kenneth Thorpe, an Emory University professor who served in the Clinton administration, claims that NHI would break the bank, and cost $1 trillion more a year than estimated as he grossly underestimated savings on overhead, drug costs, and other government expenses while assuming a grossly exaggerated increase in utilization by patients. (5)

Despite demagoguery on the issue, we have solid information on the costs – and savings – of NHI. The landmark 2013 study by Gerald Friedman, professor of economics at the University of Massachusetts, estimated that implementation of single-payer NHI will save $592 billion annually by cutting administrative waste of private insurers ($476 billion) and reducing pharmaceutical prices to European levels ($116 billion). Those savings would be enough to cover all the uninsured and provide comprehensive coverage for all other Americans, even including dental and long-termcare. Co-payments and deductibles will be eliminated, savings will fund retraining of displaced workers and phasing out investor-owned for-profit delivery systems over a 15-year period. (6)

How will this be paid for? Table 1 proposes a progressive financing plan under which 95 percent of Americans will pay less than they do now for insurance premiums, deductibles, co-payments, and out-of-pocket payments for health care. Only 5 percent of high-income Americans will pay more. The payroll tax will become the main health care tax for people with annual incomes below $225,000 – $1,500 for those with incomes of $50,000, $6,000 for those earning $100,000, and $12,000 for those with incomes of $200,000. 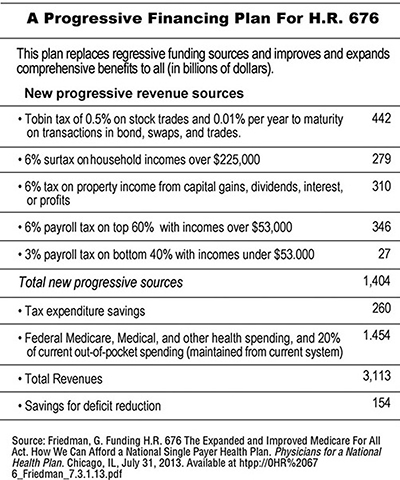 With NHI, all Americans will have full choice of doctors and hospitals, quality of care for the whole population will improve, bureaucracy will be sharply reduced, and we will finally have a more accountable and sustainable system. (7) Employers will be relieved of their burden of providinghealth insurance for their employees and may be able to convert some of their previous contributions to employer-sponsored insurance toemployees’ forgone wage increases as they gain a healthier workforce and become more competitive in global markets. Physicians and otherhealth professionals will have a simplified billing system and more time for direct patient care.

We already pay much more in taxes each year for health care than we realize. In their just-published article in the American Journal of PublicHealth, Drs. Woolhandler and Himmelstein report that the US government, at taxpayer expense, is now paying 65 percent of the total annual tab for health care – $2.1 trillion last year, $6,560 per person, more per capita than people pay in taxes in any other advanced country with universalhealth insurance. As they report, much of this taxation is invisible to us, such as government spending to buy private health coverage for public employees and tax subsidies for private employer-sponsored insurance and other privately paid care. (8)

We have to recognize renewal of opposition to NHI for what it is – Clinton’s conflicts of interest and involvement with Wall Street, despite her denials (e.g. $2.8 million in speaker fees from the health care industry between 2013 and 2015) (9); corporate media beholden to Wall Street; and a Republican consensus to block whatever President Obama does at every turn, without giving us any assurance that they will govern in the public interest.

This really is a perilous moment in the history of US health care. The ACA is fundamentally flawed – a bailout to a failing private health insurance industry and other corporate stakeholders in the medical-industrial complex. Tweaks around the edges of the ACA will never bring us cost containment in a sustainable way. If Republicans gain more control of Congress, and even the presidency in 2017, health care for much of our population will get much worse in terms of access, affordability, and quality. Research over many years has shown that the majority of Americans want NHI.

We have to come to grips that we cannot afford our present multi-payer financing system. There is more than enough money in the system to pay for it, but its waste and profiteering prevent us from getting what we are already paying for. We have to get the politics right to get the system we need – single-payer financing that we all can afford.

Order a copy of The Human Face of Obamacare

6. Friedman, G. Funding H. R. 676: The Expanded and Improved Medicare for All Act. How We Can Afford a National Single-Payer Health Plan. Physicians for a National Health Program. Chicago, IL. July 31, 2013. Available at: htpp://www.pnhp.org/sites/default/files/Funding%20HR%20676_Friedman_final_7.31.13.pdf

Share
Copyright, Truthout. May not be reprinted without permission.
John Geyman