© 2022 Truthout
Want to see more coverage of the issues that matter? Make a donation to Truthout to ensure that we can publish more original stories like this one.

Mexico’s first Indigenous female presidential hopeful might not even get her campaign off the ground, thanks to outright discrimination and a host of arduous requirements that stop ordinary people from participating in politics.

The campaign of Maria de Jesús Patricio Martinez (also known as Marichuy) so far has just 14 percent of the signatures necessary to register her as a candidate for July’s general election.

“To collect signatures, you have to have a high-quality phone that processes data quickly and has a high-resolution camera. That’s what the INE [National Electoral Institute] requires for scanning voter ID. These phones cost at least 12,000 pesos,” said Gerardo Bazan, a member of Resistrenzas, a Puebla city-based group that supports Marichuy and her broader campaign.

Marichuy is representing the National Indigenous Congress (CNI), as well as a broader campaign in defense of land against multinationals, for environmental justice, women’s rights and more. But those campaigning for her know she doesn’t stand a chance — starting with the expensive smartphones required.

“If you think about what the minimum wage is (2,220 pesos per month), that’s very expensive. And that’s on top of the fact that a lot of communities, especially Indigenous ones, aren’t even registered to vote — so there’s already that censuring,” said Eva Serna, another member of Resistrenzas.

Communities can submit requests to the INE to be allowed to use paper signatures, but even then, they face an uphill battle, as many don’t have access to the internet, electricity or photocopiers. Those supporters who manage to get the smartphones then have to wage war with the application, which requires high-speed internet. Even some of the wealthier independent candidates are struggling, with Margarita Zavala, wife of former president Felipe Calderon, uploading a video illustrating how the INE application gives her a range of error messages, before she gives up.

For now, campaigners have worked out that the best time to use the app is midday, when sunlight is good enough to get a decent scan of voter ID. But despite managing to overcome many of these hurdles, Marichuy supporters found that phone and internet reception stopped working on October 14 in Altamirano, and on October 15 in Ocosingo, right when the campaign tour was passing through. Marichuy herself has also complained that various banks had refused to open a bank account for her — which is one of the requirements made of independent candidates. Then, on January 21, armed people in two vans stopped Marichuy’s campaign caravan and stole journalists’ phones and cameras.

The Poor Are Overlooked, Overworked and Don’t Have Time to Collect Signatures

“What the INE asks for is nothing, really, compared to the organizational effort that goes into a campaign like this,” Serna said. “How do we make this campaign visible with most media refusing to cover it, without a printer — using just our own resources?”

“You have to be visible in public all the time, otherwise people don’t take you seriously,” Bazan said. “There’s a lot of physical effort and time involved. Marichuy is traveling the country, visiting a few towns every day, with next to no resources.”

Upper-class candidates tend to have financial support from businesses, colleagues and cartels, but Marichuy’s base is mostly made up of people below the poverty line. Almost 60 percent of workers in Mexico are informal workers, without any labor rights or security, and Mexico tops the list for the longest working day, as well as for women spending the largest amount of their time on unpaid work. While women spend an average of 373 minutes a day on unpaid work in Mexico (the second-highest amount globally), Mexican men spend just 113 minutes a day, and Korean men, for example, spend just 45 minutes.

For many of Marichuy’s supporters, “If they don’t work for a day, they don’t eat that day,” according to Bazan. “They aren’t going to be able to volunteer. But other candidates have the luxury to pay for campaigners. All of us though are volunteers who care about a cause.”

“When she’s traveling around campaigning, Marichuy stays in a local home; she doesn’t stay in hotels,” Serna said.

On top of that, media stereotypes about who makes a plausible national leader are making things even harder for women, Indigenous peoples and the poorer classes. “When the proposal (for a female Indigenous candidate) first came out in March last year, the media went on the attack, saying ‘how is it possible for an Indian to be a candidate?'” Bazan said. “People on social media went on the offensive, taking it as a joke. Combined with such racism, we’re faced with the lack of knowledge — that people aren’t aware of the CNI.”

Indeed, people on Twitter claimed Marichuy looked like the “woman who cleans my house.” Further, 80 percent of Mexicans are excluded from media and entertainment, according to an author on racism in Mexico, with most television shows and advertising portraying white and light-skinned Mexicans and upper-class Mexicans almost exclusively.

“Indigenous people are systematically forgotten,” Bazan said. It wasn’t until 2001 that the political rights of Indigenous peoples were recognized in Mexico, and by 2015, the INE still didn’t have any data on the number of registered Indigenous voters. Currently, there are just eight Indigenous legislators representing 15 million people from Indigenous communities, while some 8,000 Indigenous people are in prison, waiting long or indefinite periods for a sentence.

The Strange Advantages That Other Candidates Have

While Marichuy’s campaign is organized as a movement to defend various rights, most of the other candidates run their campaigns and their politics as a business.

Indeed, when running as an independent candidate became a possibility in 2012, many people were hopeful that it was a sign of increased democracy.

“But, now I think that ‘independent’ should be in inverted commas, because most of these candidates leave an old party but keep the structures and power that comes with it,” said Maria Maldonado, another member of Resistrenzas. “They run independently because their party didn’t choose them, but I don’t see that as independence.”

“While we’ve been out there collecting signatures, we have come across other people doing the same thing for other candidates, and found out from them that they have a wage, and they get a bonus for every 15 signatures they get — they have that advantage,” said Pavel Mayorga, also a member of Resistrenzas. “But there’s no wage or bonus for dong something socially useful, like our campaign.”

Competing with party candidates is even harder. Resistrenzas activists have found that just entering many communities is difficult and fraught with danger because local organizations are often part of a dominant, right-wing party like the Institutional Revolutionary Party (PRI) or the National Action Party (PAN), and don’t allow others to go there.

“Some of these organizations put pressure on people to affiliate to a party, and people will join so that they don’t lose their land, for example,” Bazan said. “We need to build up our contacts and allies in these communities, but that is a slow and long-term process that extends beyond the upcoming elections.”

“People often feel that they have to join the party [the PRI] in order to obtain benefits and rights,” Serna said. “Often, people aren’t convinced of the politics, but they are on PRI lists because they needed something simple. They don’t understand that they are paying taxes, and that what the state gives them actually isn’t a gift. We have to understand that this goes back decades, and find ways to campaign despite it.”

Lorena Hernandez, another member of Resistrenzas, is a teacher in a small community, where she says it was a lot of work to initially be accepted, as locals argued she shouldn’t criticize the PRI during class.

“There’s a tradition where during elections, [the students’ parents] think they’ll [be] receiving something, like a bag of school products or a water tank or graduation money in exchange for a vote or a voting credential,” Hernandez said. “The local mayors are like the representatives of national party legislators and leaders, and they will suspend classes, for example, if a party candidate visits for a campaign speech.”

Even in the aftermath of last year’s devastating earthquakes, parties like the PRI and PAN were found distributing donated goods through refuges set up in their own names — and having control over institutional structures like ministries — with the police helping them do that.

A Different Type of Electoral Campaign 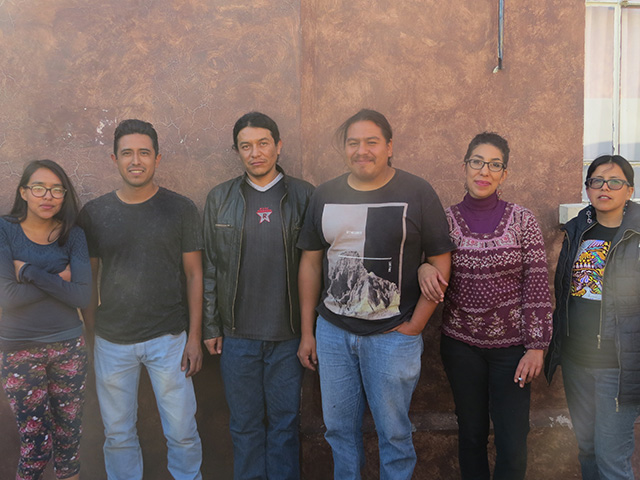 Some of the members of the Puebla-based Resistrenzas group that spoke to Truthout. (Photo: Tamara Pearson)

But Resistrenzas activists were quick to point out that they had one clear advantage over other independent candidates. “Marichuy really represents people, and the ideas she stands for have support around the country,” Bazan said. While other candidates may just be known in their local area — perhaps for their business connections or wealth — Marichuy’s campaign is about telling people that she doesn’t just want their signature or vote, she wants them to get organized for long-term change.

“Marichuy even refused the money from the INE that all those aspiring to be a candidate get. That way, no one can say she’s in it for the money,” Maldonado said.

“The idea behind this campaign for Marichuy is to use the signature collection as a pretext to organize ourselves,” Serna said. “We have to be prepared for what will probably come after the presidential election: violent structural reforms. If we’re not organized, we’ll be screwed.”

Juan Carlos Guerrero, a supporter who accompanied Marichuy when she initially registered with the INE, said, “Through (Marichuy’s campaign), the suffering that many Indigenous communities face and the violence against women will be made much more visible. She isn’t just another presidential candidate; her candidature is about making the underdog side of Mexico visible.”

“Our organization is important because of the plundering of Indigenous communities … and in the cities as well, there are so many deaths, imprisonments and forced disappearances,” Marichuy said. “Trump wants to finish us off — that was clear from the moment he took over. Our struggle is also against him. We know it isn’t easy, but we have to build our forces.”

Share
Copyright, Truthout. May not be reprinted without permission.
Tamara Pearson