A packed Senate hearing room sat quietly, slowly leaning in to catch the grief-stricken testimony of Amanda Greubel. “I’ve sat with parents as they completed the eligibility application [for free or reduced lunch], held their hands as they’ve shed tears of shame,” she explained, “… I’ve held women’s hands through pregnancy terminations because they can’t afford another child now.”

As Greubel's voice broke in her testimony, tears were beginning to form in my eyes. And mine weren’t the only ones.

Greubel is the director of the Family Resource Center at Central Clinton Community Schools in DeWitt, Iowa. She came to Washington on Thursday to testify before a Senate Committee on Health, Education, Labor, and Pensions committee hearing entitled, “Stories from the Kitchen Table: How Middle Class Families are Struggling to Make Ends Meet.”

The hearing was the second in a series the committee is holding on the economic struggles facing the middle class. Congress has much to learn from the stories of real middle-class families about where Washington’s priorities should be. Their testimonies offered a clear portrayal of the broken social contract. Witnesses repeated the idea that middle-class families had “worked hard, played by rules and did everything the government told them to do,” and yet they are now so far away from the American Dream the government and society had promised them.

Bernstein provided the “empirical evidence behind the middle-class squeeze” that Greubel so tragically shares with many other middle class families. He displayed a chart based on Bureau of Labor Statistics data that shows median family income and U.S. productivity growth for two time periods: 1947-1979 and 1979-2009. As the chart shows, real median family income did not begin disappearing at the onset of the Great Recession and will not end after the aftereffects of the recession are past. Economic inequality has increased almost exponentially in the last 30 years. 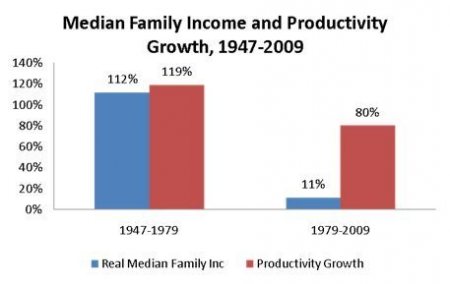 
The decline of real middle class income in this country over the last 30 years is intolerable. Greubel’s own family life is an example. She has lost $10,000 in income a year when the state of Iowa, for the 2009-2010 budget, cut education funding mid-year, forcing the school board to reduce her position to three-quarters time. This change has forced the family, as Greubel put it, to go through a “complete financial, emotional and spiritual overhaul.” She has a young son and is expecting another child in December. Her son ends up eating more cereal and ramen noodles than she cares to admit, most of their clothing now comes from Goodwill and the couple spent the last few months catching up on a $1,000 hospital bill when her son became sick. She even thought about terminating her own pregnancy at one point.

Despite all this, Greubel considers her family lucky compared to the families she helps at her job who have to pick between medicine and food, who make anguished decisions to terminate pregnancies they cannot afford, who watch as one or both parents fall into a deep depression after 16 months of unemployment and feelings of worthlessness.

Greubel said her family and others she works with are neither lazy nor uneducated. In fact, both she and her husband earned master degrees, but they are also facing the difficulty of paying off student debt on a tight budget.

Most middle-class families in America are in the same plight, Bernstein said, as middle-class income in the last 30 years has gone up only 3 percent but college fees have gone up 10 percent.

Families like Greubel are facing hard financial and family decisions as politicians in Washington are trying to tear up the social contract previous leaders signed with the middle class. Meanwhile, CEOs of financial corporations bailed out by taxpayers are getting six- and seven-figure salaries.

Washington, I implore you to hear the plights of middle-class families all across America. Listen to the words of Chairman Sen. Tom Harkin’s opening statement, which summed up the economic situation of the middle class:

“…[S]ince the 1970s, that social contract has disappeared. Real family income has barely budged despite our workforce becoming more productive than ever. Unions have deteriorated and defined benefit pensions have all but disappeared. Our manufacturing base has been shipped overseas. Large corporations have put returns for their shareholders and higher pay for their executives over their workers economic security. Income and wealth inequality are at levels not seen since immediately before the Great Depression.”