Also see Part I: In Haiti, the State and International Community Continue to Trounce Human Rights

Community organizer and rights defender Jackson Doliscar speaks to efforts of the Haitian government to silence advocates of human rights and land and housing rights. The attacks are part of the government’s strategy to leave opposition movements defenseless.

The cases that Doliscar discusses here are only a few of the many instances of violence and illegal imprisonment that the government of Michel Martelly has perpetrated since taking power in a fraudulent election three years ago. Other cases even include the public assassination of the coordinator of the Coalition of Haitian Human Rights Organizations (POHDH by its Creole acronym), Daniel Dorsainvil, and his wife, Girldy Larêche, on February 8, 2014.

The Martelly Administration is becoming increasingly autocratic, including disregarding elections and instead ruling by decree. Nevertheless, the US government continues to provide political and financial support, even including assistance to the lawless police.

Human rights are not respected at all in this country. The weakest members of society are arrested, they’re pushed off their lands and out of their homes. Police beat them, destroy their belongings, and put their lives and the lives of their families in danger.

Then their defenders and allies are bullied and intimidated by the government. We defenders become victims ourselves, suffering death or threats and significant oppression.

Let’s take the case of Jean Mathulnes Lamy, a police officer and son of peasants on Ile-­­­à-Vâche [a small island off Haiti’s northern coast]. When the government decided to take the island for a tourist development project, Lamy understood that it would lead to the eventual displacement of close to 20,000 people. [He became vice-president] of a community organization KOPI [Collective of Ile-à-Vâche Farmers]. He spoke out about what the government was doing and what the eventual effect would be on their lives.

Based on that, the government arrested him in February 2014. He spent ten months in the National Penitentiary without charge or trial.

As for the president of KOPI, Marc Donald Laines, the government made him numerous job offers if he would step down from that post. He refused, saying that he was with the people of Ile-à-Vâche. When they saw that he was intractable, he died under mysterious circumstances that we believe was an assassination [on October 25, 2014]. He was in Les Cayes on a motorcycle when someone deliberately crashed their motorcycle into him. Many witnesses saw the other motorcycle head straight toward his. After he fell, the man who hit him sped off. [Seven months prior to his death, Laines wrote on his Facebook page, “In this country, when you’re doing good work, either they kill you or they put you in prison.”]

I was accosted, too, for my work to help people who were displaced by the earthquake of January 12, 2010. What happened was this: I visit people living under tents to take stock of the situation and the living conditions so that I can do a better job defending their rights. There’s a camp called Kanaran that the government declared to be “at the service of the public.” So displaced people took their little sheets and went there to find a spot to sleep. Two men began visiting the place, telling residents to clear out because the land belonged to them. But by this point, many people were established on this land because they were under the impression that the land was free to settle on. Then armed thugs began arriving and destroying homes.

Last November 8, when the two men and their gangs destroyed a home, I went down to check out the situation. Once I’d taken down all the residents’ complaints to send off to Amnesty International, I was waiting by the side of the road for a car to take me home. I saw a motorcycle coming from the north. One of the two riders got off the bike, walked towards me, took a gun out and pointed it at me. The driver, who stayed on the bike, pulled out a gun, too. And the one with the gun pointed at me said, “I know you’re the guy who works with this community.” I said, “I’m here defending the human rights of these people, who are in a tough situation.” And then he said, “Human rights? Oh, you’ll learn about those.” The driver said, “All right, let him go.” They both put their guns back in their pants and returned the way they came.

It’s not the first time I’ve been accosted. But the threats are getting worse, and I feel compelled to talk about them.

And there are others such as Fenel Clauter, who’s worked a lot on behalf of people whose human rights have been violated. He was arrested June 30 of last year for defending people in the village of Lumane Casimir, where the government had built small housing projects, including for 50 handicapped people. The houses were originally going to be rented for 1,500 gourdes [US$32.27] per month. Then the government turned around and asked for 2,500 gourdes [US$53.77] – money the people don’t have. This would be especially hard for the handicapped people, who typically don’t work since the state doesn’t create jobs for them; they didn’t know how they would manage under such demands. The camp population revolted.

The police beat Fenel, along with the son of a woman with only one foot, Guerdine Joseph, in retaliation for her organizing people to resist the price increase. They arrested her son and kept him in jail from June to November.

In September 2014, they kicked Fenel’s wife out of the village, along with Guerdine Joseph and her whole family.

Fenel was brought to trial for threatening a policeman. Even the judge laughed at that, because the police are armed and Fenel wasn’t. The judge said he didn’t have any reason to hold him. But they won’t release him because his arrest was politically driven from on high, as far up as the prime minister’s office. The magistrate even showed the Amnesty International representative and me a letter sent to the court by the prime minister’s office, saying that Fenel was the troublemaker behind the mobilization in the village.

The government is issuing warrants to arrest human rights lawyers, too. Look at attorney André Michel, who brought a corruption case against Martelly and his family. The government tried to arrest him on October 22, 2014, but they had to release him the next day because the streets filled with demonstrators. [As Port-up-Prince was rocked with protests over Michel’s arrest, the White House released a statement praising Martelly’s “commitment to continue working to further strengthen Haiti’s democratic institutions.”] 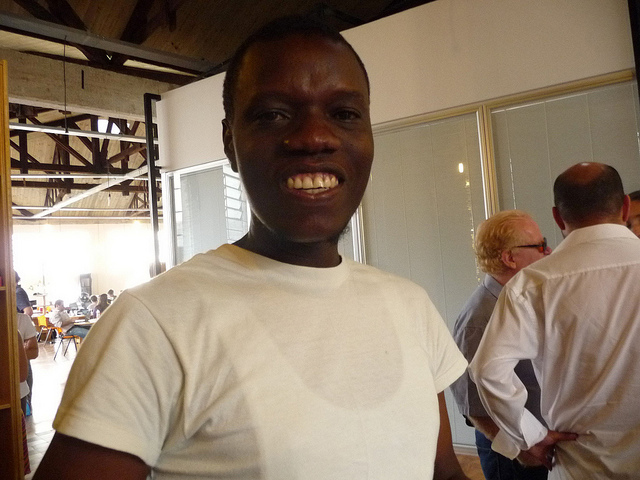 Then there’s Patrice Florvilus. He’s a human rights lawyer who defends people who’ve been unjustly imprisoned and held without charges. Some thugs within the Haitian police have regularly threatened Florvilus. They’ve followed him while he walks, they’ve tailed his car in their police car, and they’ve put pressure on him to stop legally defending these people who are society’s weakest.

It’s important that the Haitian state provide protection to all people defending human rights. We aren’t the enemy of the government. We’re working to improve the situation of people in the country.

Share
This article was first published on Truthout and any reprint or reproduction on any other website must acknowledge Truthout as the original site of publication.
Beverly Bell