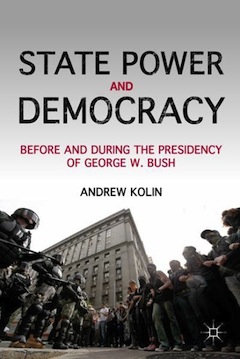 The expansion of state power over the course of U.S. history came at the expense of democracy. As state power grew, there developed a disconnect between the theory and practice of democracy in the United States. Ever- greater state power meant it became more and more absolute. This resulted in a government that directed its energies and resources toward silencing those who dared question the state’s authority. Such questioning of state power had emanated as a response to mass- based political movements striving to further democracy with an increase in freedom, especially for the downtrodden. This put mass movements in direct confrontation with the elite politics of policy makers. So, over time, as the U.S. government continued on its course of seeking to increase state power by extending ever- greater control over people and territory, it also meant it worked toward a goal to diminish mass-based political movements. This tendency began not long after the end of the Revolutionary War, starting with the conquest of North America and by the start of the twentieth century, continuing with the expansionism outside of North America.

Throughout the nineteenth and twentieth centuries, the U.S. government initiated policies intended to eliminate democracy inside and outside the United States. It is no coincidence that as the state enacted measures to crush democracy, there appeared federal agencies with an antidemocratic mission. Also developing throughout the nineteenth and twentieth centuries in relation to crushing democracy was the state unleashing political repression. Nonetheless, political repression ebbed and flowed, often determined by historical factors and the ability of progressive movements to affect social change during periods of unrest. Still, despite some success in making America more democratic by including the excluded, overall state power was becoming more absolute, above the law and the U.S. Constitution. The achievements of progressive movements were being overshadowed by the state’s measures, which eventually wore them down and then eliminated them as a social force for the advancement of democracy. . . . One prerequisite for a police state’s exercise of absolute power is the concentration of power in one branch of government, and so in the latter part of the twentieth and twenty- first centuries, presidents operate with ever greater frequency outside of the U.S. Constitution and according to their arbitrary will. So by the time we reach the presidency of George W. Bush, the executive branch had become a branch that saw itself as above the law while making law.

The state came to embody the will of George W. Bush and his inner circle. In this regard, the Bush administration functioned as other police states have, in Germany, Russia, Italy, and Spain. Most indicative of a police state mentality exhibited by recent presidents from Nixon to George W. Bush was that they truly believe they did not break any laws because of their belief that they had sole authority to act as lawmakers. The spark that ignited the transition toward the final form of an American police state was the attacks on the World Trade Towers in 1993 and 2001. At the same time that this permanent police state came into being, what took place was the elimination of what remained of procedural democracy and rule of law. In response to these attacks, the Clinton and both Bush administrations had the opportunity to twist law in such a way as to make diverse viewpoints illegal. Any and all opposition to this war on terrorism would unleash the unquestioned power of the federal government through wholesale surveillance, roundups, and preventive detention as well as political trials.

Overall, the formation of an American police state was the end result of establishing a link between internal and external terrorist threats in a time of national emergency. Afterward, the government acted outside the Constitution by passing the Patriot Act, the Military Commissions Act, and a host of other measures, which produced a direct assault on civil liberties. By using an abstract definition of terrorism, the government had all the rationale it needed to consider all citizens and noncitizens terror suspects.

The clearest example of an American police state that acted like so many other police states is its use of preventive detention. In one example—extraordinary rendition—all the government has to do amounts to accusing anyone of anything related to terrorism, and this was a sufficient reason to seize and ship individuals elsewhere to be tortured. The use of torture, unfortunately, is an all- too- common practice used by democracies that have degenerated into police states. Torture as state policy simply means that a police state is exercising total domination over the minds and bodies of those identified as enemies of the state.

The U.S. government also used torture to justify the maintenance of a state of permanent emergency. Torture as state policy was also employed as a propaganda tool in the Bush administration’s campaign to rationalize an aggressive war against Iraq. All too common in many police states is the tendency to manufacture reasons to go to war so as to create mass mobilization to support the war.

Police states also function in a state of permanent war in part through the use of shock troops, specialized forces used to instill terror on a conquered nation, such as the use of mercenaries, like Blackwater Corp. in Iraq. Such corporate warriors fit well into the idea of a police state that operates outside the law. The twisted and extensive use of signing statements also indicates that an administration is functioning outside the law. In a distorted extension of the theory of a unitary executive, President Bush’s excessive use of signing statements resulted in giving him dictatorial powers.

One obvious question must be asked: what is the future of the American police state? If history tells us anything about police states, it is that they all eventually crumble, in large part, because over time, they become dysfunctional. The same can be said of the police state of the Bush administration. During the second term, there were indications of a breakdown in how this police state functioned. Some of the clearest symptoms of this dysfunction were the revelations of torture at Abu Ghraib, the National Security Agency’s surveillance program, and the large number of prisoners released from Guantanamo Bay. In addition, opposition mounted to the reauthorization of the Patriot Act and the Supreme Court ruling in the Boumediene case, which called into question the use of the Military Commissions Act. In the early days of the Obama administration, the trend seems to point toward an American police state that will be modified, not eliminated; the evidence appears in the mixed messages of the administration.

Reprinted with permission from Palgrave Macmillan.

Share
Andrew Kolin
Andrew Kolin is a Professor of Political Science at Hilbert College near Buffalo, NY. He earned his doctorate in political science from the City University of New York Graduate Center; he previously taught throughout CUNY and in several units the State University of New York and private colleges. He is the author of The Ethical Foundations of Hume’s Theory of Politics (1990); One Family: Before and During the Holocaust (2000) and State Structure and Genocide (2008).
Truthout
Share
Reproductive Rights