Despite Ireland’s steadfast denials, activists have gathered evidence of the country’s link to US rendition and torture activities, and the US Senate torture report has made accountability unavoidable.

The scale and brutality of the CIA’s extraordinary rendition program would not have been possible without the ample and willing assistance provided by dozens of other countries.

A comprehensive 2013 report by the Open Society Foundations (OSF) shows that out of the 54 countries listed as having actively colluded in the program, 25 are in Europe. It is no surprise then that the December 2014 publication of the US Senate’s redacted report into CIA torture sent ripples across the Atlantic Ocean.

Although the report does not name any countries, allegations against at least two European countries have been proven. The publication of the report led former Polish president Aleksander Kwasniewski to admit that he knew the country let the CIA run a secret prison. The response elsewhere was muted, or denials were issued.

One country that has steadfastly denied all allegations, without adequately investigating claims, is the Republic of Ireland. The claims relate to Shannon Airport, a commercial airport in the west of Ireland, which has provided a stopover point for the US military for well over a decade. In that time, thousands of flights have landed at the airport, including dozens of alleged torture flights, and more than 2.4 million soldiers have transited.

The Irish government’s failure to investigate has not prevented others from doing so, both within the country and abroad. A 2007 report by the European Parliament, which claims more than 1,000 CIA torture flights used European airspace between 2001 and 2005, states that 147 such flights made stopovers in Ireland during that period and recommended “a ban should be imposed on all CIA-operated aircraft landing in Ireland” as well as a parliamentary inquiry. A 2006 report by Europe’s human rights body, the Council of Europe, stated that Ireland could be held liable for its collusion in torture, with other states that acted as ” ‘stopovers’ for flights involving the unlawful transfer of detainees.”

The Irish Human Rights Commission published a report in 2007 calling on the Irish government to inspect all US military planes, thousands of which were passing through the airport at the time. A 2011 review by the UN Committee Against Torture also called for an investigation. As in most European countries that colluded with the CIA in its torture program, that has never happened.

With the failure of state authorities to act, grassroots organizations and civil society activists have taken on the task instead. In Scotland, plane spotters recorded “torture” flights leaving and entering domestic airports; this has led to an ongoing investigation by the police into at least six such flights. As part of the investigation, Scottish police are seeking access to the full US Senate Torture Report.

On the other hand, in Ireland, home to possibly the most active organization on the issue in Europe, the peace and human rights NGO Shannonwatch, which monitors ongoing US military use of Shannon Airport, and others have recorded details of aircraft potentially linked to CIA rendition, producing a considerable body of evidence. These flight logs have been handed over to the police, yet out of hundreds of complaints made, only 10 have ever been subject to investigation and have proved inconclusive. Requests by activists for suspicious aircraft to be inspected have been refused. 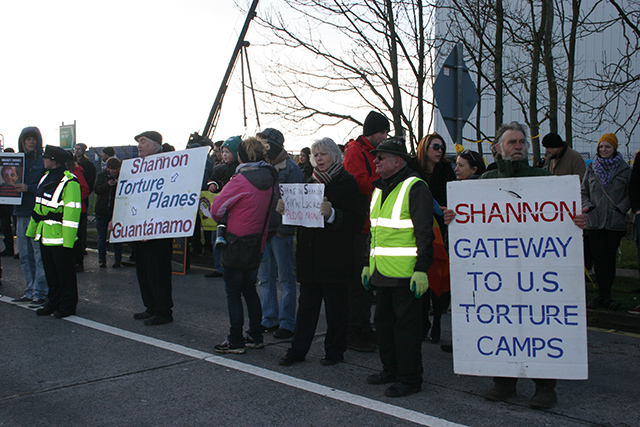 Indeed, instead of protecting the Irish people against possible illegal actions by a foreign military at a domestic airport, the Irish government has spent large amounts of money to facilitate the process and have the police and military protect US military flights. With protests against both rendition flights and the military transport of troops and arms through the civilian facility, in 2013 alone, the army was called out for support on 324 occasions.

Rather than investigate its own activities linked to crimes against humanity, such as torture facilitation, the Irish authorities have on numerous occasions arrested activists opposing such crimes. Two Irish deputies are currently subject to court proceedings following their breach of the airport perimeter to inspect US military planes in 2014, after the Irish government failed to do so itself subsequent to many requests.

This is a strange position for a “neutral” state to take. The publication of the Senate’s Torture Report makes acceptance of the US’ assurances no longer a tenable position. Following debate in the Irish parliament on the Torture Report and Ireland’s collusion in extraordinary rendition, at the end of December 2014, the Irish Minister of Foreign Affairs stated that his ministry would be seeking clarifications and further information from the US about the use of Irish airspace and airports. Shannon Airport and the Torture Report are unlikely to have been featured on the agenda of Irish Prime Minister Enda Kenny’s visit to the United States.

The claims of torture complicity are serious. It is fortunate that the intransigence of governments that hide behind veils of secrecy, diplomacy and straight-out lies has not deterred activists. Shannonwatch continues to hold monthly demonstrations outside Shannon Airport calling for accountability and to monitor activity at the airport. At a protest just days before St. Patrick’s Day, activists produced a video to raise awareness of the issues.

In response to the Torture Report, Shannonwatch stated, “It is now well past time for a full investigation of the role played by Shannon in the brutal and illegal interrogation undertaken by the CIA in the past decade.” The European Parliament has also called on states to investigate in response to the report and is resuming its own investigation into European states’ complicity.

Most reports on extraordinary rendition relate to historic claims or those concerning current Guantánamo prisoners, however, the OSF report does not rule out the possibility of the ongoing outsourcing of torture across the world. Accountability is the only way forward. That has to take place at all levels everywhere.

Share
Copyright, Truthout. May not be reprinted without permission.
Aisha Maniar