The council’s decision to divest city funds from Wells Fargo has been applauded by the Standing Rock Sioux tribe and their supporters, who are facing serious new challenges in their opposition to the Dakota Access pipeline.

On February 7, Deputy Assistant Secretary of the Army Paul Cramer notified members of Congress that the US Army Corps of Engineers has granted a 30-year easement to Dakota Access, allowing the pipeline to cross government-owned land in Morton County and Emmons County, North Dakota.

Bypassing the usual two-week waiting period, the US Army Corps said it was willing to “execute” the easement within 24 hours.

Building a Case for Divestment From Wells Fargo 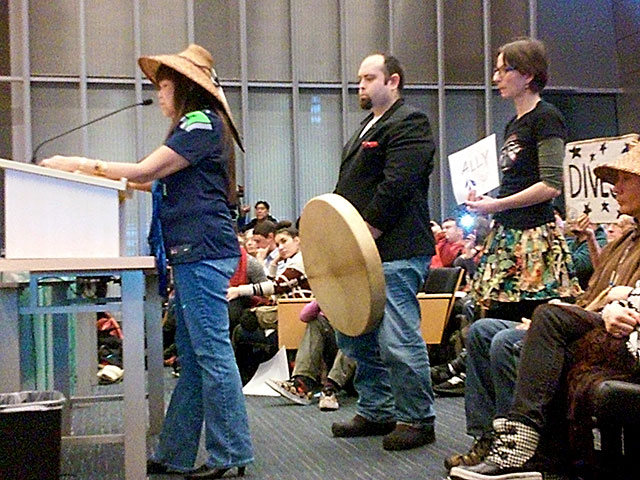 The Securities and Exchange Commission reports that Wells Fargo has supplied $347 million in credit to companies involved in the Dakota Access pipeline.

Wells Fargo maintains that it’s only one out of 17 financial institutions helping to finance the pipeline, and that its loans represent only 5 percent of the total $3.8 billion cost of the project.

Energy Transfer Partners, which operates 70,000 miles of pipelines in addition to the DAPL, has a $3.7 billion line of credit with the bank.

During a public comment period before the vote, Standing Rock Sioux tribal member Olivia One Feather told the council:

We are here to protect the future for our children … having worked through presidential orders to halt construction and nothing was done. We need your help — please! The people of Standing Rock, our friends at Standing Rock, the world needs us to stand up and speak out against these injustices. We must protect our natural and life-giving resources for our beautiful sacred children and our beautiful Mother Earth.

Muckleshoot tribal member Rachel Heaton addressed the full council, thanking them for their vote on this issue.

While tribal members from Alaska and Washington spoke to the council, the city hall chambers filled to capacity with people carrying signs that said “Ally” to show their support for the council and solidarity with Native American tribes.

As tribal members sang and drummed a song of thanks, Heaton presented all of the nine Seattle City Council members with traditional ceremonial gifts to honor them for their vote in favor of divestment from Wells Fargo.

Seattle City Council member Debora Juarez is a member of the Blackfeet nation. She spoke to the overflowing crowd in council chambers before the final vote, saying:

Seattle has a long and proud history of placing our social policy values above the pursuit of pure profit. In December 2012, Seattle passed Resolution 31420, proclaiming Seattle is a human rights city. It is our commitment to human rights as stated: “To constitute an important framework of human rights principles … as well as provide a model for municipal governments to translate and implement universal human rights principles at the local level.”

On September 4, 2016, the Consumer Financial Protection Bureau placed Wells Fargo under a consent order related to its unfair consumer practices. In the order, the CFPB found that Wells Fargo opened, among other potentially fraudulent accounts, 1.5 million deposit accounts that may not have been authorized and that may have been funded through simulated funding, or transferring funds from consumers’ existing accounts without their knowledge or consent.

The Consumer Financial Protection Bureau (CFPB) also found that the bank had charged $2 million in fraudulent deposit-account fees and more than $400,000 in fraudulent credit-card related fees. CFPB levied a $100 million fine against the financial institution.

In December 2016, federal regulators imposed restrictions on the bank for its failure to prepare for potential economic crises or bankruptcy in the future. As a result, Wells Fargo was blocked from the establishment of new international banking businesses and prohibited from buying any non-bank subsidiaries. The bank was required to provide new financial plans to federal regulators by March 31, 2017.

Wells Fargo currently owns 80 subsidiaries and funds in the US and in eight other countries. The financial giant, which benefited from taxpayer-funded federal bailouts in 2008, has also been accused of unfair labor practices. Seattle City Council Bill 11905 states: “Since September 2016, former Wells Fargo employees have filed a multibillion-dollar class-action lawsuit claiming they were wrongfully terminated for failing to meet unreasonable quotas…”

Herbold also points out that Wells Fargo has “played a leading role” in financing the debts of GEO Group, which owns and operates the Northwest Detention Center. Her amendment refers to the US Immigration and Customs Enforcement facility as “a private detention center located in Tacoma, Washington, and utilized to detain immigrants and refugees from all over the state including Seattle, who are undergoing removal proceedings.” She referred to a report by the group In The Public Interest: “The Banks That Finance Private Prison Companies.“

A recent Seattle rally against Trump’s immigration ban brought an estimated 20,000 residents out into the streets.

During the Seattle City Council meeting, Lisa Herbold spoke out about the mistreatment of Standing Rock Water Protectors by law enforcement agencies, including the use of rubber bullets, water cannons, pepper spray and tear gas on protesters.

Storyteller and flutist Paul “Che oke ten” Wagner of the Vancouver Island Saanich tribe told the council: “The time has come to say no to corporations such as Wells Fargo that fund this form of discrimination and abuse.”

Watch a video of the Seattle City Council vote:

Share
Copyright, Truthout. May not be reprinted without permission.
Mark Taylor-Canfield