While volunteer after volunteer from each of Wisconsin’s 72 counties marched into the state’s election board to deposit over one million signatures for the recall of Wisconsin Governor Scott Walker, Walker was nowhere to be found.

At the hour petitions were being deposited on January 17, Mother Jones revealed that Walker was scheduled to attend a high-dollar fundraiser in the heart of the New York’s financial district at 339 Park Avenue — the towering headquarters for global financial giant CitiGroup. The $5,000 per couple fundraiser was hosted by none other than Maurice “Hank” Greenberg, former CEO of AIG.

Walker’s choice to be on Wall Street the day of the recall filing is so astounding, for many it goes far beyond the notion of a tin ear. “Walker could not have sent a clearer signal to Wall Street, that he is on the side of the 1 percent ready to do their bidding and take the heat,” said Scot Ross of the Wisconsin group, One Wisconsin Now. Ross points to the data his group compiled to support his claim that Walker is constructing an economy that only the 1 percent could love.

No two institutions are more responsible for the economic collapse of America than CitiGroup and AIG.

Citi is the original too-big-to-fail bank. Citi’s merger with Travelers Group in 1998 blew apart the Glass-Steagall protections that had kept the U.S. financial system safe from major financial crises for 60 years.

Citi was a primary driver of the subprime mess. A top Citi official testified before Congress that the firm was betting that the housing market would go sour as early as 2006, yet it remained the nation’s top lender of subprime mortgages and continued to underwrite billions in subprime mortgage-backed securities. It hedged risk by taking out insurance in the form of credit default swaps with firms like AIG.

Like Goldman, Citi has been caught betting against its own customers. Citi’s $285 million settlement with the Securities and Exchange Commission (SEC) — for fraudulently selling packages of mortgage-backed securities that they knew would fail — was just tossed out by a federal judge who called it “is neither fair, nor reasonable, nor adequate, nor in the public interest.”

Today, Citi is considered by many to be a zombie bank, with billions in toxic assets and growing legal liability. Yet, Citi CEO Vikram Pandit hauled in $23 million in bonus money in 2011, giving him plenty of pocket change to support pet politicians.

It was a surprise to see Hank Greenberg's name on the Walker invite (below). Greenberg was last seen fleeing down Wall Street with Elliot Spitzer hot on his heels, pursuing him for securities fraud and bid-rigging in 2005. AIG later settled federal and state charges for $1.6 billion, one of the largest fines in history. Greenberg, now the CEO of global finance firm CV Starr, and Co., settled the charges against him for $15 million.

All this took place, before that critical week in September of 2008 when the Lehman Brother’s and AIG collapse triggered a global economic meltdown. AIG had issued some $500 billion worth of credit default swaps it could not pay for when mortgage-backed securities went sour. In 2008, AIG was taken over by the U.S. government and bailed out by taxpayers to the tune of $68 billion. Most of that money is still outstanding.

Right now, Walker can raise unlimited sums due to a quirk in Wisconsin’s recall law. How much he raised from Wall Street on January 17 is still unknown, although in his latest report, Walker raised 60 percent of his campaign war chest from out of state according to One Wisconsin Now. This included four eye-popping $250,000 contributions.

In his 2009 movie, Capitalism: A Love Story, Michael Moore unveiled two explosive memos written by Citi analyst in 2005 and 2006. The memos coin the term “plutonomy” and describe in glowing terms Citi's view of a U.S. economy entirely driven by the wealth and purchasing power of the 1 percent. The memos can be accessed here and offer a stunning glimpse into the cognition of Wall Street elite.

Plutocrats Drive the Economy: “The world is dividing into two blocs — the plutonomies, where economic growth is powered by and largely consumed by the wealthy few, and the rest. Plutonomies have occurred before in sixteenth century Spain, in seventeenth century Holland, the Gilded Age and the Roaring Twenties in the U.S.”

The Future: “We project that the plutonomies will likely see even more income inequality, disproportionately feeding off a further rise in the profit share in their economies, capitalist-friendly governments, more technology-driven productivity, and globalization.” “Society and governments need to be amendable to disproportionately allow/encourage the few to retain the fatter profit share.”

Forget about Main Street, Invest in the Plutocracy: “Since we think the plutonomy is here, is going to get stronger…” “It is a good time to switch out of stocks that sell to the masses and back to the plutonomy basket.”

While Henry Ford believed that the economy thrived when the people who made the cars could afford to buy them, the Citi plutocrats believe that growth is powered only by the super rich and that catering to their taste for imported baubles and bags should be the goal of every investor and policymaker.

Some believe Scott Walker got the memo.

In Wisconsin, a Budget Only a Plutocrat Could Love

If you believe that “the earth is being held up by the muscular arms of its entrepreneur plutocrats,” then the first thing you should do as governor is send them some money. 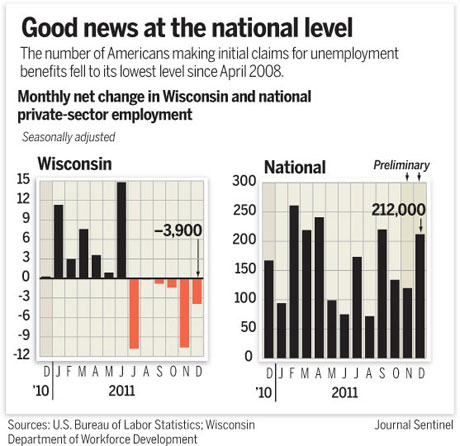 The result of all these changes? Employment in Wisconsin dropped off a cliff the in the month of July, the month that the Walker budget kicked in. At the same time, employment nationally was on the uptick, as can be seen from these compelling graphs by the Milwaukee Journal Sentinel.

One realtor put it this way: “Walker doesn’t get it. People don't want to move to 'Wississippi.' They want to move to a modern, pro-growth state where there will be jobs, modern infrastructure and opportunity. His policies are scaring off my customers.” A local economic think tank dubbed the issue “the price of extremism.”

The Citigroup memos pose the question, how long will the electorate continue to endorse plutonomy?

Some might say that the residents of the state of Wisconsin have also gotten the memo. They did not just take out their anger and frustration with sustained street protests, frequently topping 100,000 last winter. They put their discontent into democratic action, petitioning for the redress of grievances in the unique way provided for by the Wisconsin Constitution.

They are refusing to be Citigroup's “plutoparticipants.” 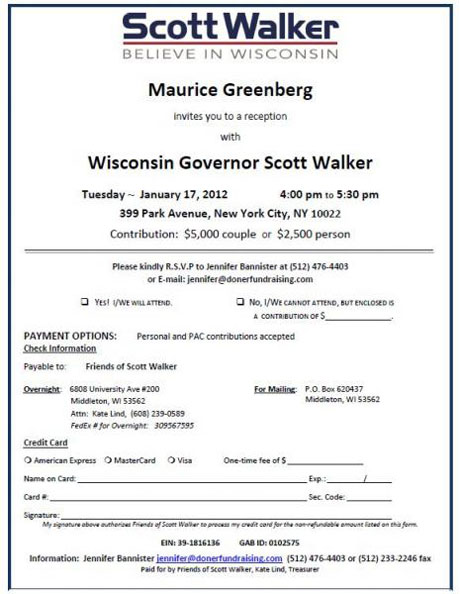