“It’s not fair for you to bring up race!”

“How do you know race was a factor?”

“What makes you think they weren’t just mean people?”

We heard all of these dismissive comments after sharing our experience of racial discrimination at a Fresno dive bar called the Brig. Instead of sympathizing with our experience, people assumed that the mistreatment wasn’t race related because there were no overt signs of racism, such as racial slurs.

Why is it so difficult to believe that today, a little more than 50 years after the now-celebrated civil rights movement of the 1960s, people continue to act on racial bias and thereby discriminate against people because of their race?

The answer is often implicit racial bias, the unconscious attitudes and racial stereotypes that cause people to act even in the absence of conscious animus or prejudice against any particular group.

Racism, whether it’s overt or implicit, must be acknowledged.

These inaccurate mental fillers can lead to rapid reactions that manifest as discrimination against people of color. Assumptions are immediately made that certain people act a certain way and deserve the action that follows. It’s not uncommon for people of color to be watched more closely, face restrictions that don’t apply to others and then be punished or harmed for not following the “rules.”

So let’s recap what happened that night in Fresno. We wanted to perform karaoke, so three of us went to the Brig, one of the only places that offers it in Fresno, and picked a song from the book. After making our request, we stood near the performance stage. The two of us were not drinking but the third person in our group ordered drinks. Suddenly, a bartender demanded we purchase more drinks. 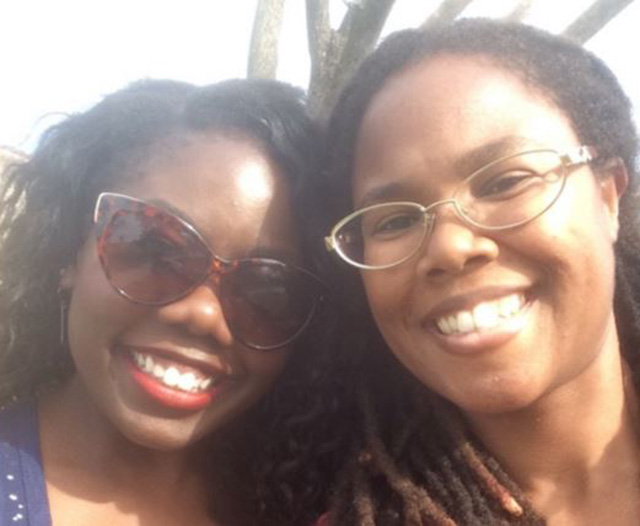 ACLU attorneys Abre’ Conner and Novella Coleman say they were forced to leave the Brig, a bar in Fresno, after being subjected to a mandatory drink minimums rule that was neither posted publicly nor enforced against white patrons. (Photo: ACLU of Northern California)

We looked around confused as we realized several other patrons did not have drinks. The bartenders didn’t approach any of them. This mandatory drink minimum was only being applied to us.

We checked the walls to see if there were any signs that could explain why our drinks within our group were not enough. There were no signs regarding drink minimums. Then, the head bartender, who was almost a foot taller than Abre’, tried to physically remove her from the bar. She asked him to stop touching her and he finally stormed off to call the police.

Another woman employee approached us, and we asked why the other bartenders only demanded that we buy more drinks. She remarked that they could only watch certain individuals. When we noted to her that it seemed strange that they found time to watch two Black women, she yelled at us that we could not bring up race. When the police arrived, one of the officers asked if we thought it was a “racial thing” and after looking around the bar, noted the rule seemed “made-up.” But they still forced us to leave.

We know what happened to us at that bar and we know why it happened. That’s why we’ve requested an investigation by the California Department of Fair Employment and Housing, the agency charged with enforcing the state’s civil rights laws. The agency interviewed us this week and we hope an official investigation is launched after that.

Racism, whether it’s overt or implicit, must be acknowledged. At a time when people are so quick to point to a postracial United States that elected a Black president, understanding implicit bias becomes even more important.

Implicit bias leads people to see stereotypical behavior where it doesn’t actually exist. A study showed that when police officers were exposed to crime-related words, they paid more attention to Black faces and they were also more likely to falsely identify a face that was more stereotypically Black.And when police officers were asked, “Who looks criminal?” they chose more Black faces than white faces.

Similarly, in our situation, some people have assumed we were drunk, bar hopping or “causing a scene.” None of these are true. Yet, even egalitarian-minded individuals, even those in favor of racial equality, may make these assumptions.

It may be more comfortable to believe we live in a postracial society. But acting on implicit bias and uncritically purporting to have a race-neutral lens for looking at the world perpetuate and give new life to racism in the 21st century. That is why darker skinned Black people are more likely than lighter skinned Black people to serve longer sentences, Black people are less likely than other racial groups to be hired when the applicant pool lacked prior experience for a job, people of color are more likely than white people to live near power plants and environmental hazards, and Black girls are suspended at six times the rate of white girls.

As mentioned earlier, one of the top reactions to discussing what happened at the Brig was that we were being hostile in the situation, even though those simply aren’t the facts. Numerous implicit bias studies have consistently shown that even when Black people are not aggressors, hostile and aggressive behaviors are attributed to them unfairly. Understanding the nuances of implicit bias is necessary to truly dismantle a system that oppresses people of color. For example, arguments about Black-on-Black crime are used to perpetuate stereotypes of Black criminality and Black hostility. In fact, most crimes are intraracial but we don’t hear about white-on-white crime when discussing criminal justice.

The politics of race and racism creates barriers to people’s comfort levels for open discussion. Of course, some questions regarding racist situations are asked because people want to hope there is some way to explain why racism still exists. Those are questions that we work every day to change.

The easy yet unsettling answer is that society was never meant to protect certain groups, so there is uneasiness in owning the hardships that have been created for people of color.

Share
Copyright, Truthout. May not be reprinted without permission.
Novella Coleman

Novella Coleman is a staff attorney with the ACLU of Northern California.

Abre’ Conner is a staff attorney at the ACLU of Northern California. She lives in Fresno, in California’s Central Valley. Follow her on Twitter @MsAConner.