Fifty-two environmental activists were arrested Monday in front of the White House as part of an ongoing protest calling on the Obama administration to reject a permit for the 1,700-mile Keystone XL pipeline project, which would deliver Canada tar sands oil to refineries in Texas, and rather focus on developing clean energy. An estimated 2,000 people have signed up to hold sit-ins and commit other acts of civil disobedience outside the White House everyday for the next two weeks — 162 have already been arrested since Saturday. Also joining the protest are indigenous First Nations communities in Canada and landowners along the Keystone XL pipeline’s planned route. An editorial in Sunday’s New York Times joined in calling on the State Department to reject the pipeline, noting that the extraction of petroleum from the tar sands creates far more greenhouse emissions than conventional production. Meanwhile, oil-industry backers of the project emphasize what they say are the economic benefits of the $7 billion proposal. As the Obama administration remains undecided whether to approve the Keystone XL pipeline, we speak with Bill McKibben who joins us from Washington, D.C., where he was released Monday after spending two nights in jail. He is part of Tar Sands Action, a group of environmentalists, indigenous communities, labor unions and scientific experts, calling for action to stop the project. “This is the first real civil disobedience of this scale for the environmental movement in ages,” McKibben says. 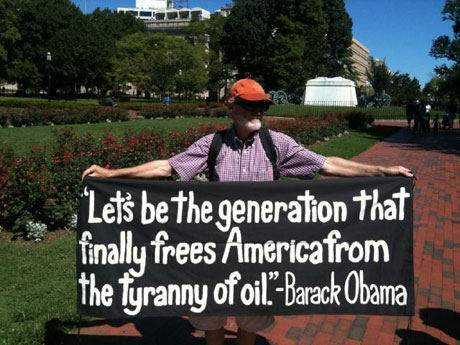 Guest: Bill McKibben, part of Tar Sands Action and founder of the grassroots climate campaign 350.org. He is the author of many books, including his most recent, “Eaarth: Making a Life on a Tough New Planet.”