Missouri activists have long struggled against the environmental devastation, residential displacement and unsafe labor practices of Peabody Coal, the world’s second-largest coal producer, which is based in St. Louis. Peabody’s acts of destruction have been vast and numerous, from contaminating aquifers with toxic coal sludge to its disregard of labor safety standards, and even the looting of sacred Native artifacts. But the company’s recent bankruptcy filing has brought little comfort to those most affected by Peabody’s conquest and avarice. 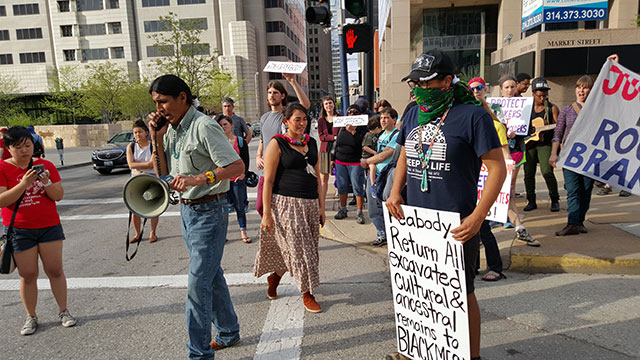 This month, organizers in St. Louis joined forced with impacted Indigenous community members to form a united front against the company’s current maneuvers, which they say are aimed at evading responsibility for the damage the company has done in the United States and elsewhere. Determined to hold Peabody accountable, organizers recently staged a day of action, punctuated by a rush hour street blockade, in the heart of St. Louis, just outside Peabody’s headquarters, to present their ongoing demands to the company. Residents of multiple affected communities say the march, rally and blockade on April 19 were the first efforts in a struggle to wrest the company’s bankruptcy settlement away from big shareholders and executive bonuses and toward a “Just Transition Fund” for coal-harmed communities. 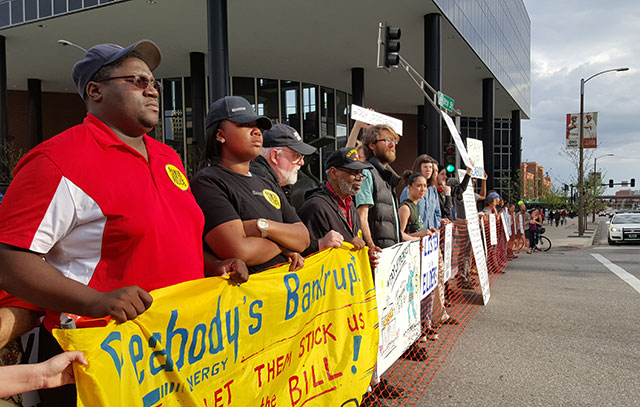 Local community members, some of whom were involved with the Ferguson uprising, hold the street with their Native allies. (Photo: Kelly Hayes) 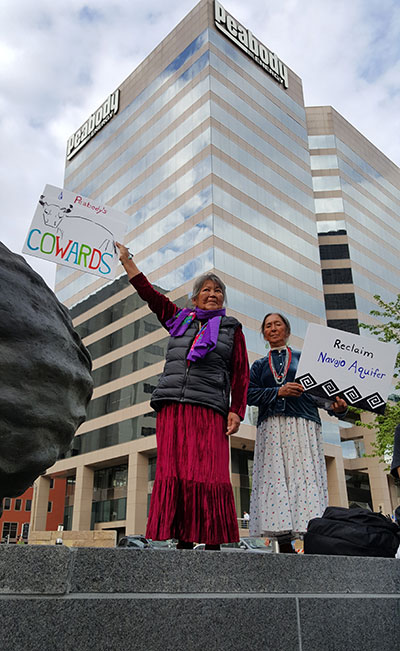 Two elders from Black Mesa stand against Peabody. (Photo: Kelly Hayes)Among other demands, community members from St. Louis, southern Illinois and Black Mesa want Peabody to clean up contaminated water supplies and honor the pensions of its employees. As Marilyn Tewa, a Hopi board member of Black Mesa Trust, explained in a statement released shortly after the day of action, “Peabody’s action to file bankruptcy means that they are unable to pay their debts to creditors. So now, the judge will determine who gets paid. Black Mesa Trust knows the first payment will be to the stockholders, top executives and nothing to reclaim land, water and people who have lived on the lands for thousands of years. No justice will be served.”

One of the organizers involved in the April day of action was Caitlin Lee, who works with the organization Missourians Organizing for Reform and Empowerment (MORE). Lee, who helped stage the day of action, told Truthout that local organizers will continue working to target “the web of power in St. Louis [that is] profiting off this bankruptcy and off people of St. Louis and beyond.” While the recent blockade in St. Louis was an intersectional endeavor that largely centered visiting representatives of affected Native communities, local participants say they know that it is their duty to carry the work forward, now that their Indigenous allies have returned home. With Peabody’s headquarters in their own backyard, activists have recently been crafting a plan to highlight their demand for a just transition led by those most impacted by what Lee calls “corporate colonialism.”

Over the next few weeks, organizers say they will be calling on the nonprofit boards that include representatives from Peabody — which include seats on the board of the United Way and Washington University in St. Louis — to sever their relationships with Peabody. “We’re coalition building for power, researching to expose the powers behind the bankruptcy curtain,” Lee said. 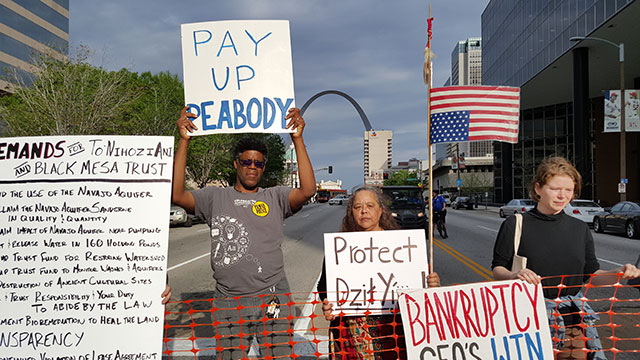 While the prospect of Peabody escaping responsibility for the company’s acts of conquest and its looting of the natural world is chilling to those most affected by the company’s policies, the effort to hold the company accountable is still infused with a great deal of hope. As Nicholas Ashley, a Land defender of Diné nation from Tséchiltah, New Mexico, explained in a testimony he offered during the April day of action, “My vision for the future is to see all power plants crumbled to the ground and plant life rise between the concrete slabs and ruins where it once stood. I envision Peabody destroyed by the masses of people who want a clean, safe world not dominated by corporate greed and capitalism.” 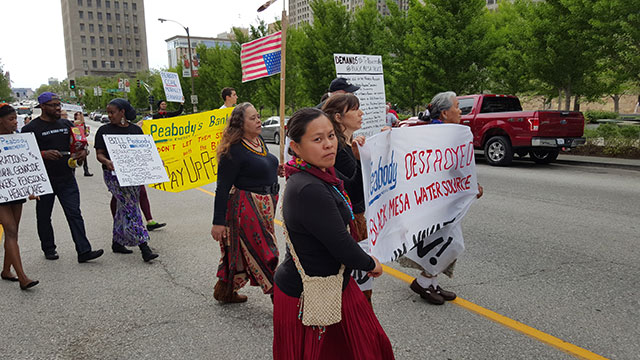 And as the fight continues in St. Louis, MORE organizer Caitlin Lee tells Truthout that active community members are ready to maintain the momentum of ongoing struggles, as they take aim at Peabody’s “co-conspirators” in St. Louis and prepare for their next major mobilization. “Coal companies — Peabody, Arch, Foresight — were never assets to the city,” Lee said. “We now have a chance to move beyond them.”