Come one, come all. Step right up and buy your ticket for a ride on the splendiferous, phantasmagoric, and miraculous Trans-Pacific Partnership!

The TPP isn’t some sort of futuristic flying machine. It’s just another global trade scam coming at us like a volcanic eruption straight out of hell.

This thing is a “partnership” of, by, and for global corporations – similar to NAFTA, only much, much bigger and far more destructive both to the middle class and to our people’s sovereignty.

After hammering out backroom deals in strict secrecy over the past seven years, a cabal of White House negotiators and corporate lobbyists are now ready to spring it on us. And its backers intend to ram it into law before We the People can get a whiff of its anti-democratic stench.

Indeed, to perfume it, they’ve already begun a PR campaign touting the TPP as a long-sought wonder cure for America’s downtrodden working class. 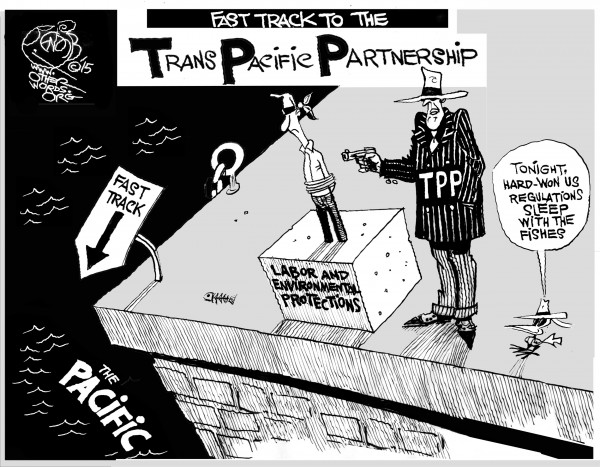 For example, such odd-bedfellow boosters as Secretary of State John Kerry and the US Chamber of Commerce both exclaim that the 12-nation scheme will “support 650,000 new jobs.”

Glenn Kessler, who writes The Washington Post’s “Fact-Checker” column, dug into that number in January. He found that it was incorrect, misleading, and silly. In fact, he wrote, “The correct number is zero.”

He also pointed out that even if 650,000 jobs were created, that’s not even a drop in the bucket. It would increase US employment by less than one-half of 1 percent.

Be alert, friends, for the TPP gang wants to dazzle us with hokey numbers and neon lies. Meanwhile, they’re stealing our democratic rights and turning our future over to global corporations. To get information and get involved, visit Public Citizen.