An antinuclear activist group uses imaginative means to keep the continuing consequences – including thyroid cancer and other radiation poisoning – of the Fukushima Dai Ichi nuclear meltdown in US public consciousness.

In March, 2011, an estimated 20,000 died as a result of the triple disasters in Japan – an Earthquake, tsunami and nuclear meltdown at the Fukushima Dai Ichi reactor.

The story was this: Two monkeys from the area worst affected not only survived, but floated to California on some hurricane debris.

The radioactive rascals then made it into custody of antinuclear activists, who would take them on a tour of the country. One of their appearances would be in Union Square in December, 2011. The incredible story spread through the New York City activist scene, and over a dozen people showed up for the appearance.

Like a carnivalesque bait-and-switch, they found a Japanese woman, dressed in a monkey suit, handing out flyers about the lasting effects of the Fukushima meltdown.

People still lived and worked in some of the areas worst hit on 3/11, the literature said; cancer rates in children are spiking, and the Japanese government is covering all this up in an effort to get the economy back on track.

The action, the work of TSJ, Todos Somos Japon (We Are All Japan), a loose-knit group of mostly Japanese activists, parodied the comments of Tokyo’s right-wing mayor Shintaro Ishihara, who argued that being antinuclear was such a devolved opinion, it may as well come from a monkey.

The woman in the costume was Yuko Tonohira, a 32-year-old activist from Hokkaido who now resides in Brooklyn and works as an illustrator. Along with veteran leftist journalist Sabu Kohso and several other friends, the group holds constant events and actions to spread word about the dire aftermath of Fukushima – a saga Americans may assume has ended.

Far from the case, Yuko argues, “Dialogues on 3/11 are disappearing outside of Japan, as if mimicking the invisibility of radioactive particles.” 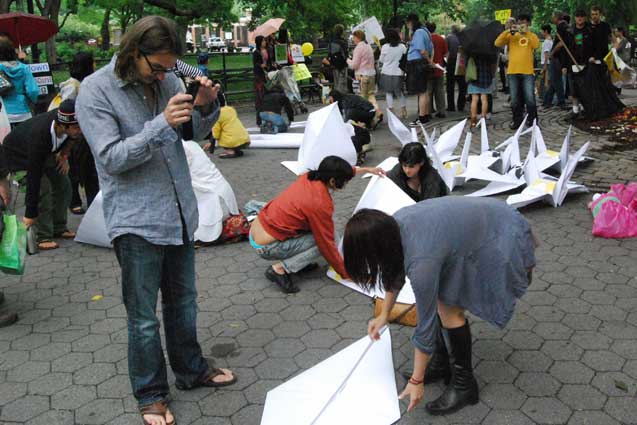 Waiting for the Health Crisis

Now also living in New York, TSJ activist Sabu Kohso visits Japan for about a month and half each year. Although he stays away from radioactive “hot spots,” he still worries for his health. “When you go to cheap restaurants you eat vegetables and fish and meat that could come from the irradiated area. In Japanese law, cheap products can avoid indicating their place of origin.” Daily concerns like this, Kohso continues, are taking an exhausting mental toll on his friends and loved ones in Japan, many of them still unsure how bad the fallout will be.

Trying to calm these concerns, Shunichi Yamashita from the Atomic Bomb Research Institute of Nagasaki, one of the most vocal proponents of nuclear energy in Japan, has toured the country and the world presenting the optimistic view that the meltdown was not so bad and that the region is safe.

At a speech at the 2012 NCRP (National Council of Radiation Protection) meeting in New York, he stressed that the dangers of the disaster are in the range of low-dose exposure to radiation, comparing early data to that of Chernobyl, a nuclear facility in the Ukraine that had a massive meltdown in 1986. The radiation released at Fukushima Dai Ichi is thought to be a fifth of Chernobyl’s, a disaster with a range larger than Japan itself.

“The people who suffer have anxiety and anger, have to calm down,” Yamashita said in his speech. “We need to monitor for long-term health condition. This is the message to local residents. And then simultaneously we must scientifically and epidemiologically [investigate whether] low-dose, long-term radiation [has any] effect on the human health.” 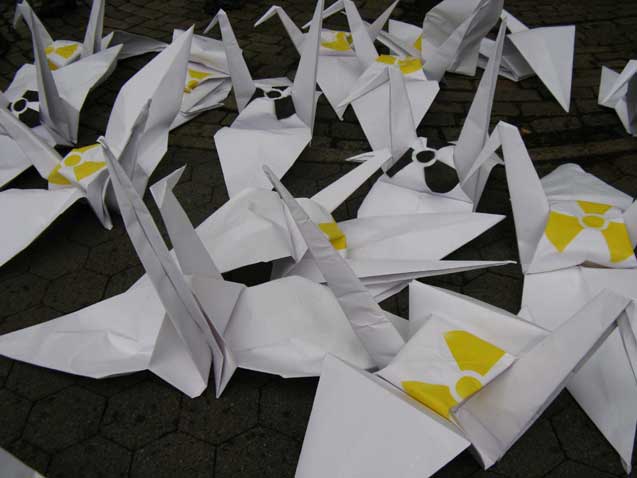 One of the main initial concerns is thyroid cancer, often caused by exposure to radiation at a young age, but it can also eventually appear in adults. A recent report from Fukushima Medical University found 12 minors with thyroid cancer, up from three in a study last year and much higher than the pre-3/11 national average.

Yamashita counters that the rise in cancer detections is the result of more sophisticated screening techniques, not radiation. Likewise, the university claims this is not a significantly abnormal number, and the cases are not related to the meltdown, because thyroid cancer in children related to Chernobyl did not appear until 4 or 5 years later.

But combined with thyroidal cysts, appearing in up to 40 percent of minors, media outlets are unsure of the reasons for the researchers’ optimism, and activists are concerned that the medical danger is being purposefully understated and cases could continue to rise.

Perhaps worse, Japan may be trying to “share the pain of Fukushima,” in the words of Environment Minister Hosono. In Tonohira’s extensive essay “Fukushima is Burning,” she mentions his push for incineration of radiated debris from Fukushima in large cities, such as Osaka. The activists worry this “pain,” in the form of the ash of radiated debris, could find its way into the region’s water supply and produce.

If a valid concern, checking the food labels may no longer be a way to avoid exposure. Yamashita, at least, might see this as a positive development, stressing in his presentation that Fukushima area farms are suffering due to widespread consumer aversion to their produce.

“The bad news,” he says, “is we have a sensational news. We are being attacked by them.” The worst lasting effects of Fukushima are mental, he argues, as if there were nothing to fear but fear itself. 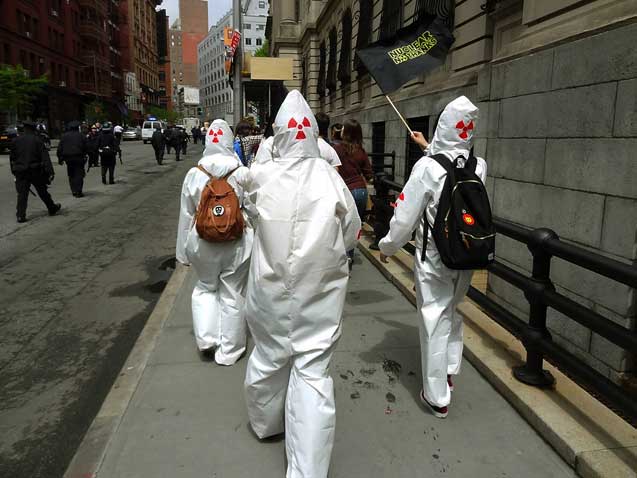 Many participants in TSJ were never involved in antinuclear activism before 2011. Kohso and Tonohira were more focused on the antiglobalization movement, and since have incorporated the disaster as part of their broader anticapitalist theories.

“When we talk about nuclear issues, it’s not just about what environmentalism,” says Kohso, who has translated books by John Holloway and David Graeber into Japanese and authored several books himself. “Somehow the antinuke movement and the organizing of workers are not working very well together.”

Tourists and other passersby posed for photos with the group, flashing peace signs mocking the typical Japanese trend. While some might see this as humiliating, the attention was what the group hoped to achieve – a visual reminder of what life continues to be like in Fukushima Prefecture.

One group seriously affected by the disaster are cleanup workers, who despite working in health-threatening conditions have yet been unable to unionize. Along with those performing reproductive labor in areas near nuclear facilities (household and parental work), those at risk of ending up in a Fukushima-like zone after another meltdown are overwhelmingly poor or working class.

This is because, Kohso says, “where nuclear power plants are built, people are in a weaker economic position compared to other places, so they accept the facility.” The consequences, of course, would perhaps be known centuries later.

On Saturday, June 5, TSJ held a screening of the documentary Women of Fukushima at the Cage Gallery in Chinatown. The crowd was almost entirely Japanese, and, perhaps as a result, the event’s tone was far more somber than the groups’ public actions.

“We humans have dug something terrible out of the ground . . .” the film begins, as if preparing the audience for a post-apocalypse sci-fi epic.

The footage wasn’t too far off, with a crew driving through a town strewn with debris, wrecked buildings, families in hazmat suits digging through their homes for valuables, and finally, a huge and ominous wild ostrich on an abandoned road.

The entire area is overgrown with gigantic weeds, which have grown unnaturally large due to the effects of radioactivity, according to Chikako Nishiyama, who spoke after the film, with the help of Yuko as translator.

Nishiyama ran for mayor of a nearby town, Koriyama, on a platform of evacuation. She lost, as expected, but her message helped to counter the optimistic stance of Yamashita, prefecture authorities and the power companies.

As of February, 2013, 60,000 people have evacuated the region. But many of those who remained are either too poor, or stay out of what they believe to be a patriotic duty. The “voluntary evacuation” urged by Nishayama and TSJ, goes hand-in-hand with their efforts to argue against the restarting of nuclear facilities nationwide.

After the disaster in 2011 Japan had a “Nuclear-Free Summer,” during which the country’s 54 nuclear reactors went offline for inspection. This followed a long series of large-scale antinuclear protests across Japan. A year later, the protests boomed again when the first two plants were set to restart. Massive protests across the country, and an attempted direct action blockade of the Ooi Plant in Fukui, made restarts a controversial issue to this day. But in the end, activists could not stop the power.

New York-based painter Al Baio noticed a stark change between her two visits to Japan, the first in 2010, and the second earlier this year. “You can feel it in the air. The first time I went, people would talk to me on the street or yell ‘kawaii’ at me.” (Kawaii is the Japanese word for cute, which she was often labeled for her Japanese schoolgirl-inspired outfits.) “Now people are much more closed-off. They seem scared, and just want to go home and be with their families.”

For this reason, TSJ argues for the importance of foreigners to continue to visit Japan, as activists or even tourists. “[The Japanese] feel like people have forgotten about them. After the tsunami, I saw so many people on Twitter saying, “Pray for Japan,’ but do they still care?” Baio wonders.

One of TSJ’s initial projects was Jfissures.org, which translates articles and communiqués from activists between languages. Another site encourages travelers and activists to visit Japan by telling them how to avoid radiation.

But another reason TSJ wants to keep Americans focused on Japan, Kohso says, is the importance of the United States in Japanese domestic policy. “The Japanese and US governments collaborate for economic well-being over the safety of the people. People cannot be living [in Fukushima], but if people aren’t living there, there’s no economy.”

While, in response to Fukushima, Germany has pledged to go nuclear-free by 2022, TSJ sees nuclear power as a sort of “last resort” for the military primacy of the United States and its allies. Trying to explain the intricacies of the issue, Kohso gets flustered. There’s too much to consider – the United States’ bases in Japan, the tensions with China and North Korea, the upcoming elections in Iran, last year’s IMF meeting in Tokyo. “It’s a very complicated issue,” he concedes.

Perhaps for this reason, the group’s dozens of articles and pamphlets are overshadowed by their most popular item – a one-inch sticker. It’s a Japanese version of the image ubiquitous in Germany, reading “AtomKraft? Nein Danke!” (“Nuclear Power? No Thanks!”). Instead of the anthropomorphized atom, the sticker features a snarling yellow kitten. It simply reads “Nuclear Power? Grrrr.”

Share
Copyright, Truthout. May not be reprinted without permission.
A.M. Gittlitz

A.M. Gittlitz is a fiction writer, essayist and bike delivery boy living in Brooklyn, New York. He formerly wrote for Arthur Magazine blog and is a contributor to the New Inquiry, Salon, Death Panel Press and Modulo Magazine.