The messages are not subtle: “Make America White Again”; “Imagine a Muslim-Free America”; “Are You Sick of Anti-White Propaganda in College? You Are Not Alone. Take Your Country Back.”

They’re signed by a handful of neo-Nazi groups — Identity Evropa [sometimes spelled Europa], The Right Stuff and Vanguard America — and they aim to inspire students to oppose multiculturalism and efforts to promote diversity. Their specific targets are feminists, anti-racist assemblies including Black Lives Matter, LGBTQ activists and organizations, and those in support of immigrant rights. Bigotry against Muslims and Jews provides the foundational pillar for their rage and resentment.

“Our movement is almost 90 percent young White men who know they are screwed if things don’t start improving,” a July 2017 article on altright.com states. “We are de facto not a White advocacy group as much as we are a Young White Men’s Advocacy group…. Minorities have explicit advocacy groups. Jews have just about everything. Young White Men do not have any money or political power…. or even deep-pocketed supporters. But then, they never have. Young White Men have always had to make up for this disadvantage through their enthusiasm, energy and ambition. They have always had to rise up and take what was theirs.”

At the core of this delusion is the fact that US demographics are changing and the US and Europe will soon join the rest of the world in being majority non-white. Three years ago, in fact, 50.2 percent of American children under the age of five were African American, Asian, Latinx or mixed race; by 2060, projections suggest that 56 percent of the US population will be of color, a stark contrast to 1965, when the population was 85 percent Caucasian.

Perhaps surprisingly, many white college students have proven receptive to arguments about the beleaguered white male. Neo-Nazi darling Richard Spencer, the 39-year-old Duke University graduate school dropout credited with coining the term “alt-right,” explains his rationale for targeting males in this age group: “People in college are at this point in their lives where they are actually open to alternative perspectives…. You need to get them while they’re young. I think rewiring the neurons of someone over age 50 is effectively impossible.”

Part of the right’s appeal is situational, says Ryan Lenz, senior writer at the Southern Poverty Law Center’s Intelligence Project, since many young white men have a hard time seeing themselves as privileged. “Many were born in a time of recession and are taking out college loans that they might not be able to pay back,” he told Truthout. “They give a welcome ear to anyone speaking about white pride and white superiority.” 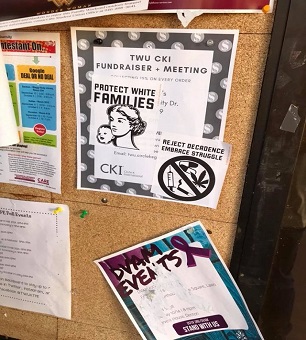 A neo-Nazi flyer posted at Texas Woman’s University. (Photo courtesy of Justin Cook)In addition, because neo-Nazis position themselves as underdogs, they prey on student sympathies because many young adults automatically side with those on society’s lowest rungs. “They purport to be a fresh political voice looking for a moment in the public square,” Lenz said. It’s a claim that at first blush can appear reasonable. Only later, he says, will the “alt-right” recruiters’ actual goal become apparent — to, in his words, “undo a system of pedagogy that accepts tolerance as truth.”

Indianapolis therapist Carol Hornbeck notes that many white adolescents and young adults are susceptible to this recruitment strategy because it is an invitation to avoid confronting their own status or position. “Unless young men have feminist or progressive family members, they can be oblivious to their privilege,” she said. “For those who attend a liberal arts college, this can mean they are completely unprepared to have their identities challenged.”

What’s more, she continues, many students finish college only to find themselves underemployed, and if white male students have not developed an understanding of their own privilege and how structures of oppression benefit them, they may be drawn to false arguments about how they are disadvantaged.

“When someone comes along and tells them it’s not their fault, but rather women and people of color have taken what should have been theirs, you’ve got a perfect set-up for reactivity,” Hornbeck said. 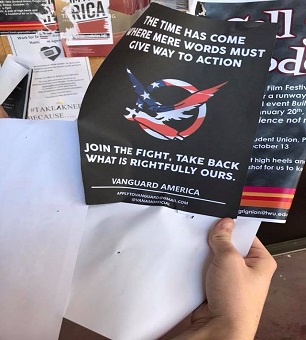 A Vanguard America flyer posted at Texas Woman’s University. (Photo courtesy of Justin Cook)Texas has been particularly hard hit — Vanguard America launched its Texas Offensive in February 2017 — but virtually every state has seen some “alt-right” outreach. Indeed, on campus after campus, students, faculty and staff have found posters and stickers with “white pride” messages. While a few schools have welcomed speakers like Richard Spencer and Milo Yiannopoulos, most have avoided direct engagement with “alt-right” stars, since the inevitable confrontations have a negative impact on recruitment and retention.

David P. Angel, president of Clark University in Worcester, Massachusetts — the first US university to offer a Ph.D. in Holocaust Studies — for example, issued a short statement shortly after the campus was stickered with messages, including “Look Around White Man, Your Culture is Being Eroded.”

Angel’s two-paragraph response declared that, “We at Clark University refuse to be a platform for this hate speech…. Let us join together and denounce these racist views loudly and without qualification. We combat hate by raising our voices and by reaffirming the values of diversity, inclusion and respect that bring strength to our community.”

Of course, the strategies by which students and faculty will raise those voices differ across states, campuses and communities.

Peter, an undergraduate at the University of Texas-Austin has little patience for statements that are unaccompanied by action. A member of the Autonomous Student Network (ASN), he reports that since Trump’s election, Identity Evropa has plastered racist leaflets on the UT campus approximately twice a month and has coalesced with other neo-Nazis to hold rallies and marches in different parts of the city. ASN has opposed them at every turn. 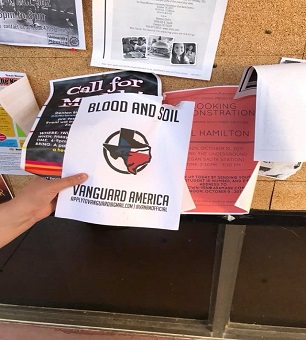 A flyer for Vanguard America posted at Texas Woman’s University. (Photo courtesy of Justin Cook)“If we want people in our communities to be safe, it is up to anti-fascists to stop their propaganda campaigns and recruitment,” he told Truthout. “The police won’t do it. We don’t egg the fascists on, but we do weekend patrols, put up anti-racist posters, and confront hate-mongers when they march in Austin or show up on campus. When we learned that UT had hired a fascist as a cook, we doxed him.”

Resisting fascism, however, has utilized a variety of diverse strategies. At Texas Woman’s University (TWU), the nation’s largest university primarily for women (87 percent of the student body is female), Vanguard America has reached out to potential recruits on campus twice since August. Sarah Gamblin, associate professor of dance, says that after the first stickering at the end of summer, a group of students and campus staff came together to remove the leaflets and signs. Later, a student group distributed hearts and flowers with messages like “TWU does not support hate” and “TWU loves diversity.”

“The chancellor and the upper-level administrators liked this response,” Gamblin says.

However, the white supremacist group was not yet finished with TWU: A second leafleting by Vanguard America took place on October 6. This time, the posters included several messages. The most overt depicted an Aryan-looking man: “The time has come where mere words must give way to action. Join the Fight. Take Back What is Rightfully Ours.”

“There was no public acknowledgment of this second postering from the TWU administration,” Gamblin reports. “People seem to believe that the best response is to ignore them.

TWU graduate student Justin Cook, who teaches first-year composition classes on campus, disagrees with this strategy and joined several other students and faculty members to remove the messages as soon as they noticed them. “TWU is majority women and has a large population of students of color. As an instructor, I could not in good conscience have my students walk past these hurtful posters,” he said. “Of course, this raises age-old questions about free speech on campus, a subject that is always fraught.” 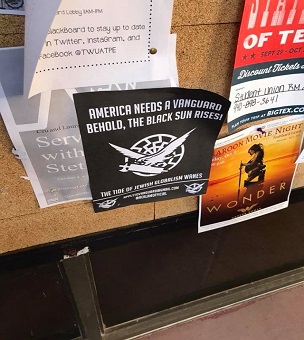 A neo-Nazi flyer posted at Texas Woman’s University. (Photo courtesy of Justin Cook)While free speech debates will undoubtedly continue to unfold, the reality of neo-Nazi recruitment efforts is both terrifying and grim.

“The ‘alt-right’ has found a shocking number of men who are receptive to their message,” SPLC’s Ryan Lenz said. Equally disturbing, despite blatant sexism, a small number of women are also entering the “alt-right” ranks. Take Ayla, a Utah mother of six whose “Wife with a Purpose” blog encourages female subservience and advises white women that it is their patriotic duty to procreate with white men.

“The ugly reality comes down to how white people see their place in the world,” Lenz said. “For some college students, joining a white nationalist group is a way to give the middle finger to the culture. It’s a reactive backlash to the multiculturalism, tolerance and equality that they’ve heard promoted throughout their lives.”

Mounting an effective resistance to counter this reactionary current remains one of the biggest challenges of our time.

This story could not have been published without the support of readers like you. Click here to make a tax-deductible donation to Truthout and fund more stories like it!
Share
Copyright, Truthout. May not be reprinted without permission.
Eleanor J. Bader