Apodi, Brazil—In his 76 years of life, Raimundo Pinheiro de Melo has endured a number of droughts in Brazil’s semi-arid Northeast region. And he remembers every one of them since 1958.

“The worst one was in 1982 and 1983, the only time that the river dried up,” said Pinheiro do Melo, who has lived near the river since 1962. “The one in 1993 was also very bad,” he told IPS, because neither Bolsa Familia nor Networking in Brazil’s Semi-Arid Region (ASA) existed yet, which contribute to a less traumatic coexistence with droughts like the current one, which has dragged on for five years.

Bolsa Familia is a government cash-transfer programme which helps some 13.8 million poor families in Brazil, half of whom are in the Northeast. ASA is a network of 3,000 social organisations which promotes the collection of rainwater, as well as techniques and know-how suited to rural life in a climate of irregular rainfall.

Water is not so scarce for Pinheiro do Melo and his neighbours because of their proximity to the Apodi river, because even when it dries up, they can get water from the cacimbas, which are water holes in the riverbed or along the banks.

Mundinho, as he is known, besides making an effort to obtain water on the high-lying land where he lives in a rural area in the Apodi municipality, in the state of Rio Grande do Norte, is dedicated to a task that is vital to the sustainability of small-scale farming in the semi-arid interior of Northeast Brazil, an ecosystem known as the Sertão. He is a “guardian” of native seeds.

In bottles and small plastic barrels, he stores the seeds of corn, bean, sorghum, watermelon and other locally planted species, in a shack next to his house, in the middle of land that is now sandy and covered with dried-up vegetation.

More than a thousand homes that serve as “seed banks,” and 20,000 participating families, make up the network organised by ASA to preserve the genetic heritage and diversity of crops adapted to the climate and semi-arid soil in Brazil’s Northeast.

Saving seeds is an age-old peasant tradition, which was neglected during the “green revolution,” a period of agricultural modernisation which started in the mid-20th century and involved “an offensive by companies that produced the so-called ‘improved’ seeds,” which farmers became dependent on, said Antonio Gomes Barbosa, a sociologist who is coordinator of ASA’s Seed Programme. 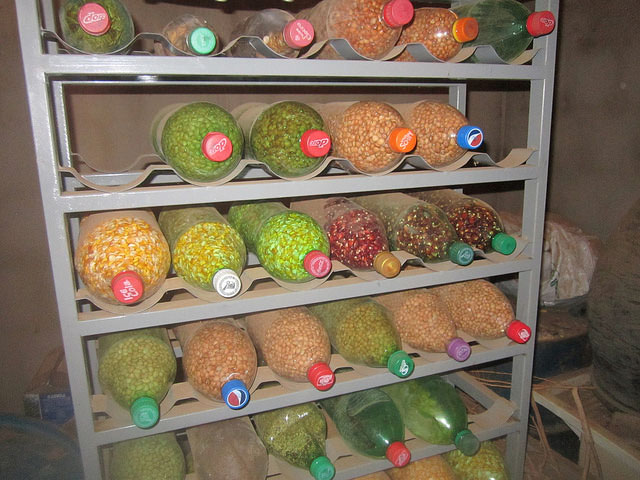 Native seeds stored in recycled plastic bottles, in a shack on his farm specially built by Raimundo Pinheiro de Melo, who proudly guards native seeds that contribute to food security in Northeast Brazil, in the midst of a drought that has dragged on for over five years. (Credit: Mario Osava / IPS)

The strategy, adopted in 2007, of disseminating technologies for harvesting rainwater for production, in search of food security, lead ASA to the awareness that small producers needed to always have seeds available, he told IPS.

A study carried out among 12,800 families found that “the semi-arid Northeast has the greatest variety of seeds of food and medicinal plant species in Brazil.” Of the 56 million people who live in the Northeast, more than 23 million live in the semi-arid parts of the region, in this South American country of 208 million.

According to the survey, the family and community tradition of storing seeds and passing them down from one generation to the next contributed to this diversity of seeds, as did migrants who returned to the semi-arid Northeast from southern São Paulo and east-central Brazil, bringing seeds native to those areas.

What ASA did was to identify the houses which had stored seeds, create a network of them and help multiply the number of these traditional seed banks, in order to salvage, preserve, increase stocks and distribute native seeds, Barbosa said.

Antonia de Souza Oliveira, or Antonieta as she is known, participates in seed bank number 639, according to ASA’s records, in Milagre, a village of 28 families on the Apodi plateau, which is crossed by the river of the same name.

The community seed bank “has 17 guardians and stocks mainly of corn, bean and sorghum seeds,” she said. 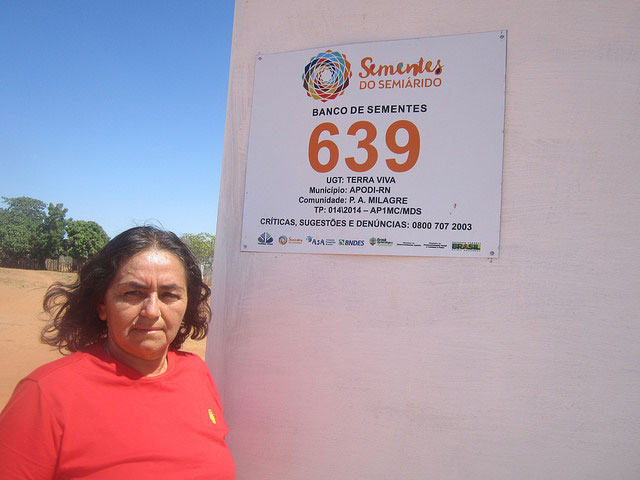 Antonia de Souza Oliveira in front of the seed bank in Milagre, a rural settlement of 28 families in the state of Rio Grande do Norte in Brazil, which has become famous for the strong participation of women in the village’s collective activities. (Credit: Mario Osava / IPS)

The strong presence of women in the activities in this community prompted former president Luiz Inácio Lula da Silva (2003-2011) to choose Milagre to inaugurate a line of credit for women participating in the National Programme to Strengthen Family Farming (PRONAF).

A model case, highlighted by ASA, is the seed bank in Tabuleiro Grande, another rural settlement in the municipality of Apodi, in Rio Grande do Norte. There, a family initiative stores seeds of 450 varieties of corn, beans and other legumes and herbs.

Antonio Rodrigues do Rosario, 59, heads the fourth generation that maintains the “family bank.”

The native seed movement is in conflict with the green revolution, where seeds are distributed by the government or are sold by biotech corporations “in great quantities but with little variety,” said Barbosa.

“We don’t need this kind of distribution, just local initiatives in every area to rescue local seeds, with great diversity and dissemination,” said Barbosa.

The movement is about knowledge accumulated by local families with experience in adaptation to each specific place, soil and climate, based on the intended type of production and resistance to pests and drought. 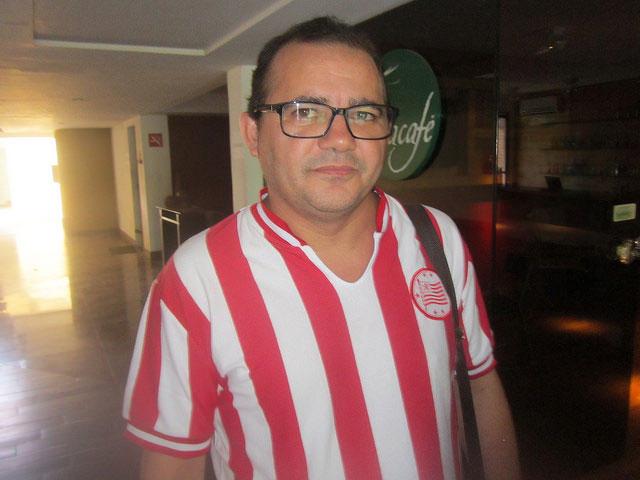 Antonio Gomes Barbosa, coordinator of the Native Seeds Programme of the movement Networking in the Brazilian Semi Arid, which brings together more than 3,000 organisations. This initiative is key to food security and biodiversity in agriculture in Northeast Brazil, especially during the prolonged drought currently plaguing the region. (Credit: Mario Osava / IPS)

“There are many varieties of corn that address different needs; you can produce more leaves to feed animals, or more corn for human consumption,” he said.

“Family gardens are laboratories, where experiments are carried out, genetic improvements and testing of resistance and productivity of seeds. The garden is where women participate the most, teaching their children as well,” Barbosa said.

“In the severe 1982-1983 drought, a variety of fast-growing potato, which in 60 days was reproduced and stored by a grandmother, saved many lives,” he said.

The exchange of materials and knowledge within and among communities is also an important part of maintaining the diversity of native seeds. ASA works to bolster this exchange, promoting contact among small farmers from different areas.

“Native seeds are at the centre of resistance to the impositions of the market, in order to overcome the dependence on big suppliers,” said Barbosa.

Climate change boosts the importance of native seeds from the semi-arid region. “There is no agricultural poison to combat the rise in temperatures,” he said, half-jokingly.

The Semi-Arid Seeds Programme proved the “great creative capacity and ability to experiment of family farmers in the Northeast,” Barbosa told IPS in the nearby municipality of Mossoró.

It also showed their tendency towards autonomy. “Farmers follow their own experience, more than the advice of agronomists, because they always choose the safest bet.”

But there are two threats that concern ASA’s seed movement. One is the “genetic erosion” which could be caused by the current drought, which in some areas has lasted for seven years.

Isolated rains tempt farmers to plant. Knowing they could lose their entire crop, they never use all of their seeds. But the seeds are gradually lost, with each deceptive rainfall, which puts their entire stock of seeds at risk.

Another threat is posed by transgenic seeds, which farmers involved in ASA reject. The presence of genetically modified corn was detected in some crops in the northeastern state of Paraíba, apparently a consequence of contamination from seeds brought in from other regions.