Imal, a 7 year old Afghan student in the 2nd grade, came to visit us in Kabul.

As Imal grew up, he kept asking his mother where his father was. His mother finally told Imal that his father had been killed by a drone when he was still a baby.

If you could see Imal in this video, you would want to hug Imal immediately.

If Imal were a white American kid, this tragedy would not have befallen his father. Which American would allow any US citizen to be killed by a foreign drone?

Suppose the UK wanted to hunt ‘terrorists’ in the US, with their drones, and every Tuesday, David Cameron signed a ‘secret kill list’ like Obama does. Drones operated from Waddington Base in the UK fly over US skies to drop bombs on their targets, and the bombs leave a 7 year old American kid, say, John, fatherless.

John’s father is killed, shattered to charred pieces by a bomb, dropped by a drone, operated by a human, under orders from the Prime Minister /Commander-in-Chief.

“John, we’re sorry that your father happened to be near our ‘terrorist’ target.’ He was collateral damage. It was ‘worth it’ for the sake of UK national security.”

Unfortunately, no US official or military personnel had met with Imal’s widowed mother to apologize.

Raz, Imal’s uncle who brought him to visit us, asked his young nephew,

“Will you bring me some marbles to play with?”

Imal was friendly, like any other 7 year old kid. “Yes!” His voice was a trusting one, eager to be a good friend and playmate.

“We put them in a line, and flick a walnut to hit other walnuts, like playing with marbles,” Imal explains diligently, like he was telling a story we should all be interested in.

“I also like….potatoes…and meat……and….rice!” All of us were smiling with the familiar love of Afghan oiled ‘palao’ or ‘Qabuli’ rice.”

Imal knew what my laptop was. He said, “We can look at photos & watch films…”

But, then, it seemed that he took on the understanding of an older person when his voice became serious.

”My father was killed by a computer.” 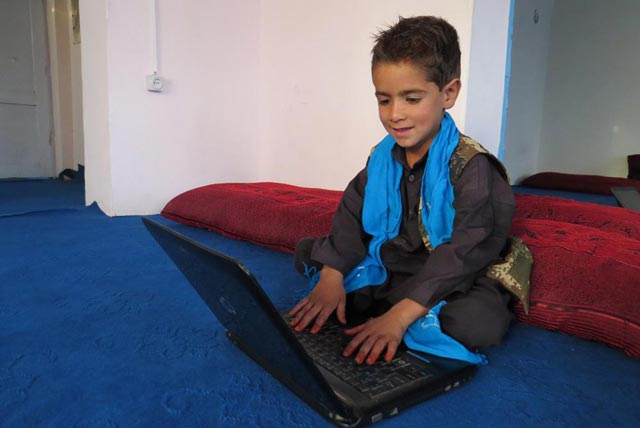 Imal on the computer. (Photo courtesy of Dr. Hakim)

I wanted to tell Imal that nowadays, it takes children and young people like Nobel Laureate Malala Yousafzai to tell us adults the plain facts.

When Malala was 16 years old and met with the Obamas at the White House, Malala had told Obama that drones were fuelling terrorism.

Do we get it? Drones are employed in the ‘war against terrorism’, but instead, drones fuel terrorism.

How many drone attacks are there in Afghanistan every month, and how many women, children and young men like Imal’s father are killed?

We don’t know. It’s not a transparent strategy.

We would all want to know everything about the possible effects of a drone strategy on our children, especially if our country was the most drone-bombed country in the world, like Afghanistan is.

In another Bureau of Investigative Journalism report, ‘Tracking drone strikes in Afghanistan’, (July, 2014),the Bureau states that “nobody systematically publishes insurgent and civilian deaths from drones on a strike-by-strike basis. Neither the US nor UK authorities publishes data on the casualties of their drone operations.”

So, we are unable to find out for Imal’s mother if it was a US/UK drone that killed her husband, and who the drone operator was.

If Imal were John, could he or his mother sue David Cameron? Stop the drone? Stop the human drone operator? Disable the computer?

We gave Imal a Borderfree blue scarf, and thanked him for coming.

His eyes were bright and cheerful, taking in the photos on the wall, including a poster of Gandhi and Badshah Khan. Badshah Khan was a Pashtun like Imal, and has been called the Frontier Gandhi for his lifelong struggle for nonviolence.

I have been thinking hard about Imal, about whether anyone would hear him, when few among the elites who declare wars and order drone strikes seem to have heard the now famous Malala, not even President Obama. 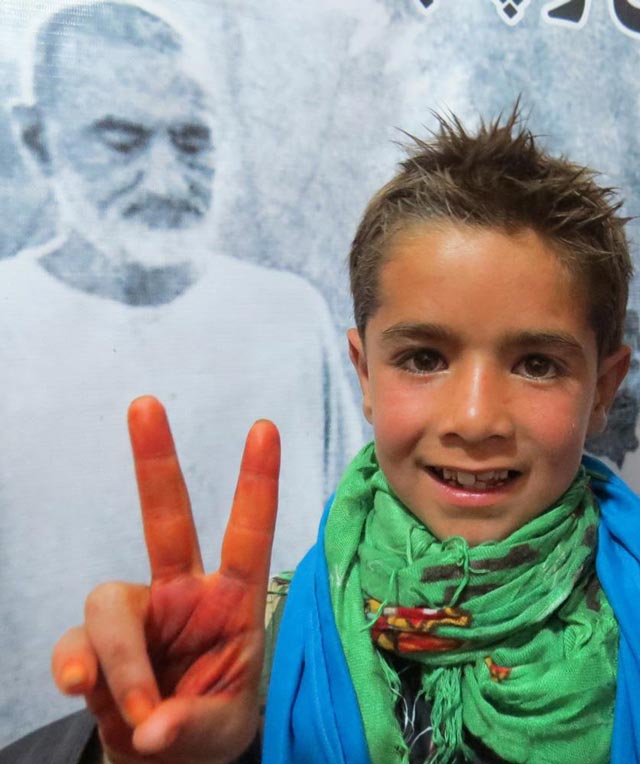 Share
Copyright, Truthout. May not be reprinted without permission.
Dr. Hakim