Greece in 2013 is an occupied country. But there’s no occupation army anywhere in Greece. Yet the occupation is as real as if barbarians were at the gates.

Enemies captured Greece simply by money debt. Greek leaders, innocent of or stupid about economic warfare, bought the poisoned pill of borrowing from Western banks. Now those banks ordered the Western governments to be tough with Greece.

And obeying the banks, the European Union and America sent their money agents to Greece demanding the surrender of sovereignty, putting all the country up as collateral for the loans. Disreputable and American-educated politicians obeyed these stark orders.

Now the Greek government gets its marching orders from minions of the EU-IMF. The result is the slashing of incomes and retirement accounts by at least 50 percent. Also – and this is insane – the Greek government is raising taxes mostly from impoverished people. The government is also selling all that its owns at bargain-basement prices to please the Germans who run the show of occupied Greece.

In this chaotic situation I went to ancient Greece, or, at least, I took a peak at some hidden ancient Greek treasures.

I started in the north of Greece, beautiful Thrace.

Abdera is a coastal Thracian town only eleven miles from River Nestos, home to treasured wetlands for a multitude of endangered birds and wildlife.

Abdera is located on Cape Polystylon. Its founder was the son of Zeus, Heracles. Abdera was home of Democritus, the fifth-century BCE father of the atomic theory. 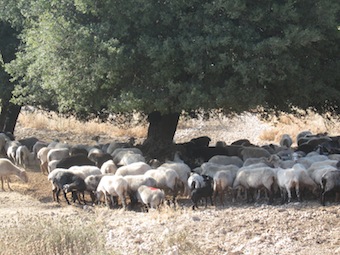 Sheep under a tree, Mt.Ainos, Kephalonia.The Abdera museum closes at three in the afternoon. I arrived a few minutes after three in early July 2013. I did not see the protected antiquities.

But the abandoned, weed-covered field of ancient ruins is huge. I saw tombs with bones, the stone foundations of large buildings, temples, and fragments of statues. Indeed, the ruins in front me in that sunny afternoon in early July are the ruins of ancient Abdera. These ruins go all the way to a small enticing harbor.

Walking in ancient, Abdera I let my imagination run wild. What inspired Democritus to see through matter all the way to the atom? The sunlight? Or was it the playful interaction between heavens and Earth in Abdera and River Nestos?

These villages have prosperous land and plenty of water. Yet, as in Thrace, that land grows mostly feed crops for farm animals, not food for people. Not enough young Greeks live in these villages.

Stratos in ancient times was the most important polis and federal center of northwestern Greece or Akarnania. Stratos overlooks River Acheloos. The daughter of the river-god, nymph Kallirhoe, was the mother of Akarnan, the ancestor of the people of Stratos and northwestern Greece.

Stratos has ancient treasures, which like those in Abdera, are unprotected and choked in weeds. These ruins are those of the ancient agora and acropolis, including the foundations and giant sections of the columns from a wrecked temple of Zeus.

That’s why it was so difficult climbing the uphill and unmarked site, an ancient acropolis. But once in the midst of those giant sculptured stones and marble, the olive trees shading temple columns, I felt like praying to Zeus. The father of the gods was there. His light was bright and warm.

Finally, I reached Kephalonia, the island in the Ionian Sea that gave me birth.

I used to tell my daughter Corinna that I was a cousin of Odysseus, the king of Ithaca and Kephalonia during the Trojan War. Homer made Odysseus a god-like hero beloved of Athena, goddess of wisdom. Without Athena, Odysseus would never have made it back to Ithaca.

I arrived at 11 in the evening in Same, a port town in Kephalonia and home of Ankaios, son of Zeus. Ankaios colonized an Aegean island, which he named Samos from Same.

Kephalonia is beautiful. The whole island is green with olive groves, vineyards, and the forest of Mt. Ainos.

Mt. Ainos in the time of Homer was a sacred altar to Zeus. In fact, Zeus was known as Ainisios (Zeus of Ainos). 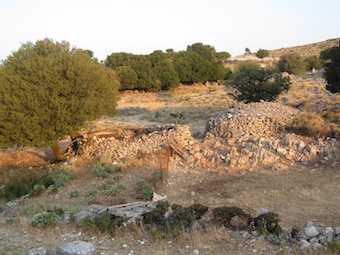 Ruins of a Homeric-era shepherd house, Mt. Ainos, Kephalonia.In 2013, Ainos oversees a rural landscape that tries desperately to become urban. Now villages have large two-storied houses, paved streets for cars but not sidewalks for people like me who like to walk. I saw no donkey, mule, or horse in Kephalonia.

Hidden behind this modern façade, however, there are ruins of tombs and palaces that may well belong to king Odysseus, my distant cousin. He took twenty years to return home. But the invisible Trojan War in Greece, now led by the unholy EU-IMF alliance, delays my return.

My Odyssey is now on its fifty-second year.

Truthout
Share
Greece in 2013 is an occupied country. But there's no occupation army anywhere in Greece. Yet the occupation is as real as if barbarians were at the gates.
Economy & Labor