Cairo – President George W. Bush kept it simple in his short television address the evening of March 19, 2003: U.S. forces had begun their campaign to unseat Saddam Hussein, he said. The goals, he outlined in his first sentence, were straightforward: “to disarm Iraq, to free its people and to defend the world from grave danger.” Some 522 words later he promised the result: “We will bring freedom to others and we will prevail.”

As he spoke, members of the U.S. Army’s 3rd Infantry Division and the 1st Marine Expeditionary Force were already crossing from Kuwait, where they’d been preparing for weeks, into southern Iraq. In those sands, it was Thursday, March 20, the dawn of a new day.

Ten years later, the era that dawn ushered in looks anything but simple. After tens of thousands of deaths, not just of Americans, but also of Iraqis – many, if not most, at the hands of other Iraqis – that country is still in turmoil. American troops are gone and a democratically elected government rules. But bombings and massacres continue, and the country remains mired in sectarian feuding between Sunni and Shiite Muslims.

Elsewhere, conflict rules – in some cases, coincidentally, with anniversaries that fall also around this weekend:

– In Libya, French planes under NATO command opened the campaign to topple Moammar Gadhafi on March 19 two years ago. Today, a democratic government is in place, though it controls little in the face of Islamist militias whose unchecked presence frequently forces the national assembly to cancel sessions. Libyan weapons, taken from Gadhafi’s unguarded stores, were crucial to the advance of Islamist fighters in Mali.

– In Syria, the civil war marks its second year on Friday, with most observers calling the conflict a stalemate and the death toll likely to have passed 70,000 – and rising every day. The Obama administration has called for the defeat of President Bashar Assad even as it denounces as a terrorist group the most effective anti-Assad rebel military faction, the Nusra Front – a branch of al Qaida in Iraq, the same radical Islamist group that the U.S. fought in that country and that the current Iraqi government also is battling.

– Even the relatively peaceful January revolutions that ushered in what came to be known as the Arab spring two years ago are unsettled. In Egypt, the world’s most populous Arab country, a religiously affiliated political party fights to establish its pre-eminence against a group of revolutionaries who demand a share of political power but seem incapable of organizing for upcoming parliamentary elections. Anti-government demonstrations have become so frequent that they hardly deserve news coverage, and the economy is in free fall.

Never has the region seen so much change in the nine decades since the end of World War I, when Western powers carved up the territories of the defeated Ottomans by drawing lines across a map. 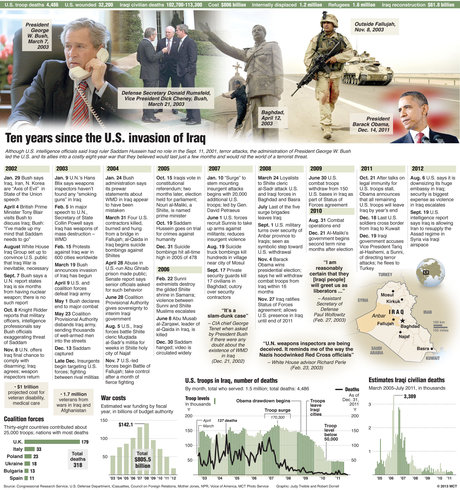 The role in that turmoil of U.S. intervention – direct, in the cases of Iraq and Libya, and through rhetoric, in Syria and Egypt – remains an open question.

In Iraq, the people think their security situation is better since American troops left the country at the end of 2011. A Gallup poll released earlier this month found that 42 percent think that, despite the occasional car bomb, the security situation has improved since U.S. troops withdrew. But they have doubts about their government. Only 11 percent said there was less corruption and only 9 percent said there was less unemployment.

Sunnis, who’d enjoyed privileges under Saddam, were particularly negative about Iraq. For 69 percent of them, corruption has gotten worse, compared with 39 percent of Shiites, whom Saddam’s regime had repressed, though they’re a majority in the country. In a clear reference to Iran, a Shiite-ruled theocracy, 39 percent of Sunnis said there’d been worse foreign intervention since U.S. troops had left. Only 27 percent of Shiites felt that way.

Iraq’s leaders openly express alarm at what’s going on in nearby Syria. That worry was particularly strong earlier this month, after gunmen deep inside Iraq killed at least 50 Syrian civilians and soldiers who’d fled their country during a rebel offensive and were being escorted by Iraqi troops to another border crossing for repatriation. Days later, the Islamic State of Iraq, the al Qaida in Iraq umbrella group, claimed the attack, which also had killed Iraqi troops, and Iraqi officials conceded that after a dozen years of training alongside American troops and billions of dollars worth of U.S. equipment, they’d been unable to defend themselves. The attack was the most sophisticated they’d seen in years, Iraqi officials said.

“We need equipment. We need electronic surveillance. We need an air force,” Foreign Minister Hoshyar Zebari told McClatchy earlier this month. “We need a border control system. Definitely. We don’t have it. We have only the concrete blocks that the Americans left for us, lined up along the borders.”

No one knows how long the conflict in Syria will go on. President Barack Obama first called for Assad to step down 19 months ago. U.S. officials no longer say Assad’s days are numbered, and the United Nations published a report this past week that says neither side may claim the military upper hand, though rebel advances seem to outnumber those of the Syrian military.

The United States agreed earlier this month to provide the anti-Assad opposition coalition with $60 million to help it get organized, and the European Union agreed to ease its arms embargo to allow some direct aid to the rebels, including armored personnel carriers.

But with Russia and China firmly on Assad’s side and blocking a series of anti-Assad U.N. resolutions, there’s no legal basis for broader international intervention – and no consensus that such intervention would end the bloodshed.

Perhaps most surprising is how much the tone of the effort in Syria has changed. Though it once was presented as an attempt to bring democracy to the country, the Islamist militant groups that dominate the rebel fighting oppose the very idea. Unable to win on their own, democracy proponents have aligned with those groups, with the head of the U.S.-supported Syrian Opposition Coalition, Mouaz al Khatib, openly denouncing the State Department’s designation of the Nusra Front as an al Qaida-linked terrorist group.

Earlier this month, as anti-Assad fighters moved through Raqqa province – first capturing a strategic dam, then the provincial capital and then the government building itself – they distributed fliers calling democracy un-Islamic.

“Beware of democracy,” they read.

That’s a lesson that in a different way might resonate in Egypt and Libya, where free elections have yet to mean stability.

Indeed, security worsened in the months after Libyans went to the polls to pick a national assembly last July in voting that was widely proclaimed as free and fair. Americans became sharply aware of that in September, when, on the anniversary of the 2001 terrorist attacks on New York and Washington, Islamist extremists overran U.S. diplomatic outposts in Benghazi, an eastern city that had been the capital of the anti-Gadhafi uprising. Four Americans were killed, including the U.S. ambassador, Christopher Stevens.

U.S. officials acknowledge that the way the anti-Gadhafi campaign unfolded, with no American or European forces on the ground to establish order after the government fell, is in part responsible for the uncertainty in that country now.

“When the Gadhafi regime collapsed, and there was, essentially, for a period of time no governmental control, it was in that environment that extremist organizations and criminal organizations took advantage of that situation to establish themselves and in some cases re-establish themselves,” said Army Gen. Carter Ham, the head of Africa Command, the U.S. military group that’s responsible for that continent.

Those groups remain unchallenged by Libya’s inexperienced police and security forces and have spread across North Africa, Ham said. Collecting intelligence on them is one reason the United States has asked neighboring Niger for permission to open a base for pilotless drone aircraft.

In its latest travel warning, issued Monday, the State Department warned Americans to stay away, describing the country as unpredictable.

Egypt has been spared the kind of widespread insurgent violence that’s plagued its neighbor but it’s still beset by political and social upheaval, despite elections that everyone agrees were the first honest ones in its history.

The Obama administration had endorsed the removal of leader Hosni Mubarak when it became clear that he’d lost the support of his people and the military. Now analysts wonder whether Egypt’s first democratically elected president, Mohammed Morsi, isn’t slowly doing the same.

Unemployment levels grow monthly, the official inflation rate is 9.3 percent and the value of the Egyptian pound is falling. Crime and general mayhem seem out of control. Soccer fans routinely defy police, shut down bridges and set fire to rival clubs’ headquarters, simply because they can. Police able to respond to more routine matters are difficult to find. Rape is common at public demonstrations. Dissatisfaction is palpable in the streets.

In a nation where $200 a month is a bounteous wage, fruit is a luxury for a huge swath of the population. So are tomatoes.

Morsi’s approval rating has plummeted, according to the polling firm Baseera. Immediately after his election last summer, it stood at 75 percent; last month it was 49 percent. Yet Morsi’s political opposition remains divided going into parliamentary elections scheduled for next month.

In May 2011, Obama spelled out lofty goals in a speech that’s considered his defining remarks on the Arab spring.

“There’s no straight line to progress, and hardship always accompanies a season of hope,” he said. “But the United States of America was founded on the belief that people should govern themselves. And now we cannot hesitate to stand squarely on the side of those who are reaching for their rights, knowing that their success will bring about a world that is more peaceful, more stable and more just.”

Those goals aren’t much different from what Bush articulated from the White House 10 years ago this Tuesday. But they may be just as far off.

Share
© 2017 McClatchy-Tribune Information Services. Truthout has licensed this content. It may not be reproduced by any other source and is not covered by our Creative Commons license.
Nancy A Youssef