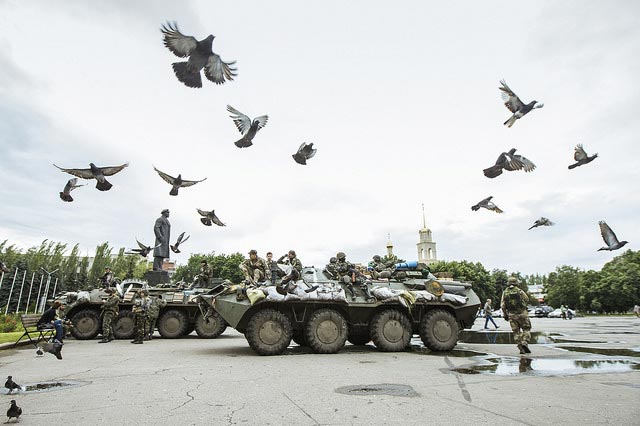 Media analyst and professor emeritus of finance at the Wharton School, Edward S. Herman, co-author with Noam Chomsky of Manufacturing Consent, discusses the propaganda embedded in US mainstream media coverage of the Ukraine crisis.

Dan Falcone: What is missing in the US mainstream news coverage of Ukraine? What major elements are being suppressed?

Edward Herman: What is missing, first of all, is a minimum of objectivity. The media are functioning more than ever as a propaganda machine for the State Department. One thing missing – and being suppressed – is the important role of neo-Nazi elements both in the Kiev government and in the forces they have fielded in their war against East Ukraine. The media are eager to find Russians in Ukraine, but will not even recognize neo-fascists staring them in the face, but working on our side. They had earlier virtually suppressed the very important role of these right-wing elements in the Maidan protests and the accompanying violence and overthrow of the elected government in Kiev. The media regularly called those forces “protesters,” whereas they called the East Ukraine rebels “pro-Russian militants” and “separatists” rather than “protesters” and “federalists.” The double standards here are dramatic and the sign of a propaganda system at work.

The Russians are “violating the border,” a sacred border for the Western propaganda machine. This is claimed by a Western client government doing a “wee bit” of pacification, killing and ethnic cleansing. The United States violates borders (Somalia, Yemen, Pakistan) on a daily basis, but the media are prepared to overlook this. The Russians invaded with many trucks containing humanitarian supplies, but for Frum and Western propagandists, this also is intolerable, challenging the sovereignty of the Kiev government. (When we know from the Iraq experience how precious sovereignty and international law are to the US and NATO) That inflow of humanitarian supplies is one of those “dangerous and deadly” things the Russians have done, “odd” too, as it was openly violating the border – which is a “no-no” when not done under the proper auspices. Frum, of course, doesn’t mention that those trucks with humanitarian supplies had been waiting quite a while for inspection and approval – that the Kiev authorities seemed unable to get around to doing [it]. Hence the nefarious invasion!

Do you read The Guardian and its coverage of the Ukraine crisis, or could you recommend some reliable or trustworthy news organizations covering the situation?

I don’t think The Guardian is doing a good job on this, nor any Western, mainstream news outlet. The demonization process has been as great as with Milosevic and Saddam Hussein, so the official party line is firm and holds the mainstream media in thrall. One has to go to sources like Robert Parry’s ConsortiumNews.com, Glenn Greenwald’s The Intercept website or magazines like Z Magazine or The Nation. RT, sponsored by Russia, is also better than the US mainstream media on Ukraine. In part, because to be at all credible to English-speaking audiences, RT has to lean over backwards to avoid straight out pro-Russian propaganda, but it welcomes Western experts like Stephen Cohen and Ray McGovern who barely make it to The New York Times or US television. I’m also fond of the website StopNato and the dissident voices put into circulation by the Institute for Public Accuracy. There are lots of other blogs by Col. Patrick Lang, Ronald Thomas and writings of the Dutch journalist Karel van Wolferen, that open vistas kept closed by the mainstream media.

What can you tell me about the US media treatment of the destruction of the civilian airliner Malaysia Airlines Flight 17? What were the specific distortions of the matter and the purpose of the distortions? How did the shooting down of Flight 17 succeed as a case in Western propaganda? What was the immediate payoff for the United States?

This is an amazing story, with Obama, Kerry, Power and The New York Times and company, immediately and indignantly accusing the rebels and Russia of responsibility for downing the plane before any investigation had been carried out. And this was accompanied with furious accusations and with a quick retreat to silence without the presentation of any evidence supporting the US-Kiev-NATO party line by either Kiev or the United States. The Russians did quickly provide radar evidence that a Ukraine fighter plane had been in the vicinity of MH17, and that the plane had moved course into the fighting zone, but the United States gave no public evidence of satellite sightings of the target environment and apparently none to the Dutch.

“The rebels and Russians had absolutely no interest in destroying MH17. The Kiev government and the US did have an interest, if it could be turned into a successful ‘false flag’ operation with blame successfully placed on the enemy.”

Their Preliminary Report on “Crash Involving Malaysia Airlines Boeing 777-200 flight MH17,” published on September 9, 2014, almost two months after the crash, mentions no specific US input. Putin and the Russians from the beginning called for a full international investigation of the episode, but this is not going to happen: The Dutch are members of NATO, and they entered into an agreement with Kiev and several other countries to allow any of the signatories to veto any report on the subject; thus if Kiev was involved in the destruction of the plane, whether deliberately or by mishap, this will never show up in an international inquiry. The media have of course ignored this agreement and Samantha Power was indignant that the Russians did not find the ongoing investigative process all that could be desired.

The rebels and Russians had absolutely no interest in destroying MH17. The Kiev government and the US did have an interest, if it could be turned into a successful “false flag” operation with blame successfully placed on the enemy. It has been so treated, with the help of the Western propaganda system, which made the enemy guilty based on no evidence, and protects the likely real killers with protracted silence.

The preliminary report is a joke – an apologetic joke – which gives the dazzling conclusion that the plane “was penetrated by a large number of high energy objects from outside the aircraft.” But that’s it. This left open the question of whether those objects came from ground or aerial firing. The NATO governments and media filled in the gap here: ground fire by a missile, no doubt fired by the rebels – not ground fire by Kiev forces, and no mention of the Russian radar and non-Russian ground observer claim of a Kiev fighter in the vicinity. A German expert who examined the site shortly after the crash claimed that MH17 showed definite signs that it was shot down by machine gun and other aerial projectiles, not by a ground-based missile. He found the Dutch report worthless (See: Peter Haisenko, “Camouflage and Cover-up: The Dutch Commission Report on the Malaysia MH17 Crash Is ‘Not Worth the Paper It’s Written On,'” Global Research, Sept. 11, 2014).

I think it is obvious that if there were any evidence demonstrating rebel or Russian guilt in this shoot down, there would have been no delay and obfuscation in publicizing such information. The silence, evasion, delays and agreement to give Kiev a veto power over any findings is telling evidence of Kiev and possibly US responsibility. This conclusion is also compatible with the matter of who benefits from this tragedy. The United States and Kiev have taken advantage of it to vilify the rebels, Putin and Russia. Whether the shoot down was deliberate or an error, it has paid off well. The rebels and Russia had no potential benefit from the shoot down, and it has been costly to them. And the power of the Western propaganda system has guaranteed that they would be public relations losers.

You have written about the Soviet shooting down of Korean airliner KAL-007 on August 31, 1983, when the Reagan administration was in an arms buildup versus the “evil empire.” I spoke with Noam Chomsky recently about the 1983 incident in which he indicated that, “Reagan lied blatantly, and Shultz more carefully. It turns out they knew at once that the Russians mistook the plane for one of the US reconnaissance planes in their airspace.” Could you shed some more light on the incident?

The mainstream media took the initial lying claims about Russia’s knowingly shooting down a civilian plane with total gullibility and ran wild with the story back in 1983, devoting massive space to this “barbarian” behavior by the “evil empire.” It seems like an upside-down version of the MH17, with the roles reversed, but with the same propaganda service. Instead of the Russians shooting down the plane and being vilified, with MH17, you have the Kiev-US combine probably doing the shoot down, but successfully blaming the Russians – and getting away with it once again! This is a superb propaganda system!

What do you see as the main attraction for the United States’ “political opportunism” in the media, especially with Ukrainian affairs?

They are pathetically chauvinistic, so that when their government has defined who are the “good” and “bad guys,” the media lose their integrity and become one of the team. The drift to the right with Fox-Murdoch in the lead and the steadily growing power of the war party has contributed to this degeneration.

Why do our elected officials and media continually use terms such as “separatists? Do you also believe that Putin is committing international crimes?

They use separatists because it has a derogatory touch. Many or most of the Eastern Ukrainians, and Putin, have claimed to want a federal system rather than a total separation of the East from Ukraine. But “federalist” sounds more innocuous and less menacing than “separatist” and “pro-Russian militant,” so the usage flows with propaganda preference.

Every head of major states commits international crimes, but compare Putin’s crimes of taking over Crimea and aiding the “separatists” with the crimes of the US-UK invasion of Iraq in 2003 and the US drone bombings of Pakistan, Yemen, Somalia, etc. The US-UK invasion-occupation was of a distant country that certainly didn’t pose any threat to US or UK national security, and resulted in the deaths of at least 500,000 Iraqis. Putin’s crime in Crimea resulted in fewer than 10 deaths and followed the coup in Kiev that arguably involved international crimes and also seriously threatened Russian national security. We are dealing here, once again, with monumental double standards.

Donate Now
Share
Copyright, Truthout. May not be reprinted without permission.
Daniel Falcone