Washington – Being the best isn’t good enough. President Barack Obama’s next Supreme Court nominee could also use a compelling story and, perhaps, a little nudge.

Ivy League pedigrees, Phi Beta Kappa keys and groundbreaking reputations abound among Obama’s potential nominees. The Senate has previously confirmed some of them for high-level posts. Raw merit, however, won’t easily separate the winner from the also-rans.

Instead, age, gender, religion and racial identities might all help tip the balance now. Personal chemistry counts. So does political viability: How much of a fight does Obama want? 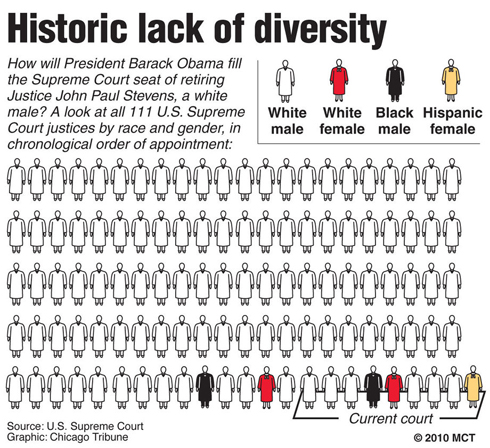 “I will seek someone in the coming weeks with . . . an independent mind, a record of excellence and integrity, a fierce dedication to the rule of law, and a keen understanding of how the law affects the daily lives of the American people,” Obama said Friday.

Solicitor General Elena Kagan and Chicago-based appellate judge Diane Wood were seriously considered for the last court vacancy, before Obama opted for Sonia Sotomayor. Kagan and Wood are again presumed top-level contenders, though in the past year their relative chances may have shifted.

Kagan is younger, as she turns 50 on April 28. Wood is 59. The modest-sounding difference could matter, if Obama reasons that the younger the justice, the longer she’ll have to become a force on the court.

Sotomayor was 54 when Obama nominated her last year.

“I tend to think of all these people as being in their prime,” Princeton University Provost Christopher Eisgruber, author of “The Next Justice,” said in an interview, “but there is a school of thinking that the president should look at the youngest nominee.”

The former dean of Harvard Law School, Kagan over the past year has extended her experience beyond the ivory tower. By personally arguing half-a-dozen cases before the Supreme Court since September, Kagan could now counter some of last year’s criticism.

“I don’t send patients to the professors at the university unless they’re the expert in the field who have actually practiced rather than just taught,” Republican Sen. Tom Coburn of Oklahoma told Kagan in 2009. “(You have) this wonderful resume . . . but yet, you’ve never been a justice and you’ve never actually been a litigant. “

Wood, by contrast, has spent 15 years on the Chicago-based Seventh Circuit Court of Appeals. She gets uniformly high marks from the lawyers who practice before the circuit, although her long tenure also gives potential opponents more written opinions to chew over.

“She has a very long paper trail,” Lee Epstein, a professor at Northwestern University Law School, noted in an interview.

Like Kagan, who graduated from Princeton and Harvard Law School, Wood has a stellar academic record, earning Phi Beta Kappa membership and ranking third in her law school class.

As a graduate of the University of Texas and its law school, Wood also offers Obama the chance to reach beyond the traditional Ivy League orbit. Tellingly, every remaining justice with Stevens’ retirement holds at least one Ivy League degree. The last justice to have graduated from a public university law school, Warren Burger, retired in 1986.

“We have a very East Coast-biased court right now,” Epstein said, adding that this perception could prove “helpful” to Wood’s prospects.

Like Kagan, the first female solicitor general and first female Harvard Law School dean, Wood has been a groundbreaker.

In 1990, she became the first woman to hold an endowed chair at the University of Chicago Law School. While pregnant with her second child, she helped develop the school’s maternity leave and, later, sexual harassment policies.

“Lawyers report that she is both scholarly and practical, thoughtful and decisive,” the Chicago Council of Lawyers concluded when she was nominated in 1995.

Both Kagan and Wood would be classified as liberal. Each has taken positions sure to draw GOP attention. Kagan, for instance, opposed military recruiting at Harvard because of the Pentagon’s policy that bars openly gay service members.

Wood, while still a full-time law school professor, was a member of groups including Planned Parenthood and the National Organization for Women.

A former federal prosecutor, who oversaw some high-profile criminal cases, Garland has a record more generally classified as moderate. Sotomayor, too, had prior experience as a federal prosecutor that proved helpful in winning Senate converts.

Kagan has never been married, while Wood is now on her third marriage. Garland is married.

A little bit of personal chemistry can help, or hinder.

Justice Stephen Breyer famously lost his first shot at the Supreme Court in 1993 because of an awkward initial interview with then-President Bill Clinton. This year, it may or may not help Wood that she knows Obama from their days teaching law at the University of Chicago.

“The president has to be comfortable with this person, who will be part of their legacy,” Eisgruber noted.

Michigan Gov. Jennifer Granholm and Pasadena, Calif., appellate Judge Kim Wardlaw also give Obama the opportunity to add a third woman justice for the first time in the Supreme Court’s history. The Canadian-born Granholm, a 51-year-old Harvard Law School graduate, offers Obama a chance to get a seasoned politician on the bench.

The 55-year-old Wardlaw, too, is a bit of a mold-breaker. The daughter of a Mexican-American mother, Wardlaw attended community college in Northern California before graduating with top honors from UCLA.

Still other names will rise and fall in coming days, from Secretary of State Hillary Clinton to Attorney General Eric Holder. Some of these names could be bona fide trial balloons, while others will be rank speculation.