Under the violently partisan Elections Board chief Kim Strach (pronounced “Strake”) — her husband was the attorney for the state’s Republican Party — North Carolina targeted half a million voters (561,693) based on the measurably racist and absurdly wrong Crosscheck list created by the discredited Kris Kobach of Kansas. The vote scam, which I exposed for Rolling Stone and Al Jazeera, showed that well over 100,000 voters were wrongly purged for supposedly being registered or voting in two states.

I met one of those dastardly double voters, Kevin Antonio Hayes in Durham, North Carolina. Kevin Antonio was supposedly the same voter as Kevin Thomas Hayes of Virginia. Mr. Hayes is, like most on the Crosscheck list, a voter of color.

Here is a detail from the Crosscheck list for North Carolina voters also supposedly registered or voting in Virginia. Note that almost none of the middle names match.

In 2014, I watched Strach give blatantly false testimony to the North Carolina legislature to get approval for the Crosscheck mass purge. The chart below presented by Strach claims that 155,692 voters in Carolina voted in a second state in the same election, a felony a crime. Yet, after a year of investigation, they could not find one such double voter. Nevertheless, tens of thousands of voters lost their right to vote for a crime for which none were found guilty let alone charged. 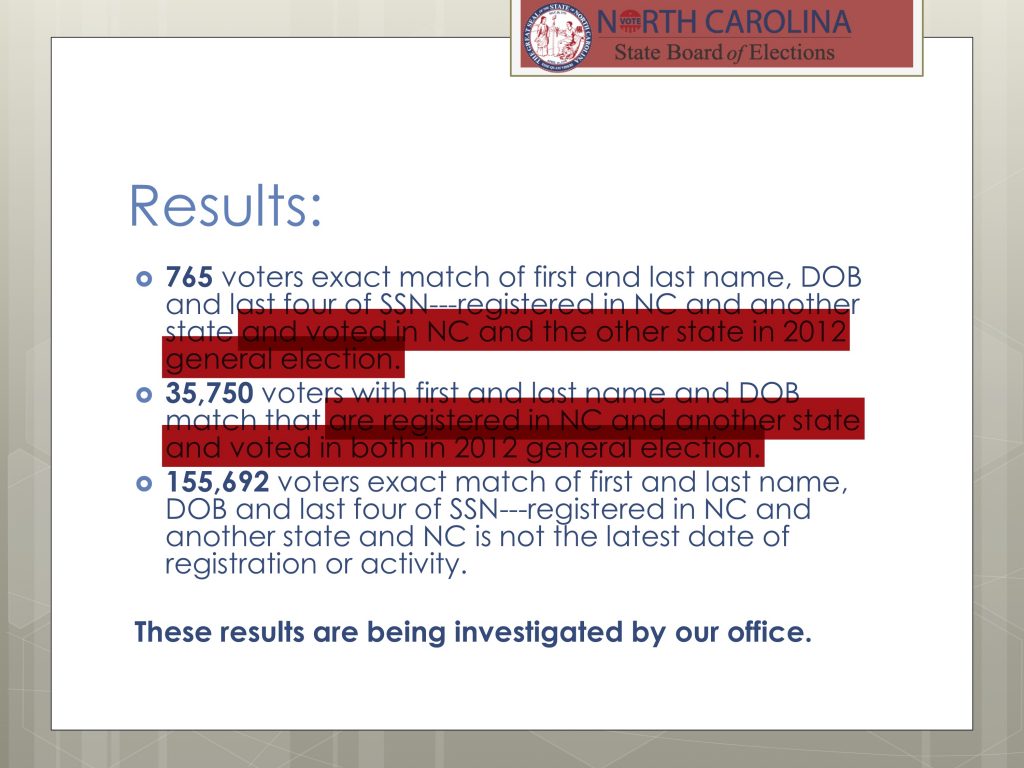 Our experts estimate the number of illegally removed Black voters is well above the meager 4,000 vote margin separating McCready and Bishop.

Strach was deservedly fired a few months ago in light of blatant vote theft in the Ninth Congressional District. She may be gone, but the damage she did remains, with voter rolls bleached white by her years of purge-mania.

When the media says that there was a drop in the number of African Americans who turned out to vote, the truth is that Black folk turned out to vote but were turned away, having been purged. But the US media, unlike my colleagues in other nations, never reports the total of people ejected nor provisional ballots rejected. The census shows that African-Americans have a higher voting percentage in North Carolina than white people.

Unfortunately, Crosscheck is not the only vote suppression trick in North Carolina’s Jim Crow handbook. Lawsuits by Common Cause, the League of Women Voters and the Rev. William Barber have challenged GOP trickery through such laws and rules as prohibiting same-day voter registration (which could cure illegal purging), shortening the early voting period (70% of African Americans vote early), and even such petty but very partisan rules as ending the pre-registration of the state’s high school graduates.

Unfortunately, the list goes on, and so does Jim Crow, the real winner of the Ninth Congressional race.

Attorneys for the Palast Investigative Fund have notified the state of North Carolina that they will sue the state in federal court unless it turns over its complete vote purge files. Crosscheck Is Ineffective and Insecure, but States Aren’t Withdrawing

by
Aaron Sankin,
The Center for Investigative Reporting