In Survival and Conscience, Lillian Rosengarten tells her story, and it’s a remarkable one: escaping Nazi Germany and fleeing to the United States in 1936, overcoming the toll which the legacy of Nazi oppression took on her family’s health, and becoming a strong advocate of Palestinian rights. Philip Weiss of Mondoweiss calls this book “a brave and wrenching account that is also deeply necessary.” Order your copy today with a donation to Truthout.

Truthout recently interviewed Lillian Rosengarten about what brought her to sail on the Jewish Boat to Gaza in an effort to break the Israeli siege.

Mark Karlin: What is the central issue of justice for you that, ironically, draws a line from the Nazi attempt to annihilate the Jews of Europe to the brutality of the Israeli government toward the Palestinians?

Lillian Rosengarten: First, it is vitally important to make a distinction between traditional Judaism and political Zionism. Although Zionism began as a liberation movement, it is now a racist, nationalistic and criminal state that operates in the name of Jews. This is a catastrophe. Israel’s Zionist goal is a Judaization of Israel that denies the existence of Palestinians. I am opposed to all nationalistic racist regimes that occupy and disenfranchise another people.

How did your family escape the Nazis?

My father saw the handwriting on the wall after he was beaten by the “brownshirts.” In the early years of Hitler’s rule, when some Jews were still allowed to leave, he attempted twice to get a visa for his family from the US. The visa was difficult to get because there was a strict quota system in the US. One was required to have a “sponsor,” a secure job and housing to be allowed to enter the United States. Fortunately, he finally succeeded.

Your parents, you write, spoke German to you, and you were raised in “a strict Germanic home.” How did you handle the dichotomy of growing up in the US culture and being educated in US schools while living within a German-Jewish environment with your family?

It was difficult. I felt rootless and for a long time tried to identify as American while pushing my German-Jewish identity underground. I never felt I was a part of anything; I felt alone, lonely and always different. It took many decades for this to change. 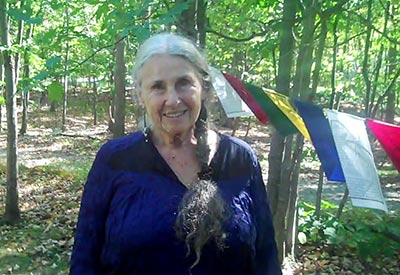 Lillian Rosengarten. (Photo: Courtesy of Lillian Rosengarten)You write in chapter four of your “personal liberation” as the counterculture precipitated by the civil rights movement and anti-Vietnam War campaign grew. Can you discuss this evolution?

The women’s liberation movement provided me with an identification as a woman. It also made me aware that other women were struggling with similar issues of identity, voicelessness and unhappiness – both in their marriages and unfulfilled professional goals. This was for me a personal revolution that brought me to a growing awareness of the path I wished to pursue for myself. The Vietnam War gave me tools for dissent and protest as well as the courage to stand up for human rights and against war with the support of an antiwar protest movement.

How did the death of your son Phil and your visits to Israel lead you toward participating in the “Jewish Boat to Gaza”?

In order for me to survive the death of Phil, I eventually gained courage and support knowing I was standing with all parents who had lost children. And so I was not alone. The death of my son became intertwined not only with the death of children of the Holocaust but with the death of Palestinian children under the Israeli occupation. When I read about a Jewish boat to break the siege of Gaza, I felt I had no other choice but to be on that boat. It was a decision I cannot fully explain. I simply had to go.

On page 131, you ask rhetorically, “Why a Jewish boat”? Can you summarize your answer?

I felt it was terribly important to let the people in the open-air prison in Gaza know that there are Jews who stand with them to end the occupation so that they can live in freedom. We wanted to express our solidarity as Jews and human beings.

What was the voyage like in 2010? Can you tell us a little about the other passengers?

The Jews for a Just Peace for Palestinians based in London supported and financed us.

We had a wonderful group of four elderly Jewish passengers: two were Israelis, one German and me. In addition, our captain was a British Jewish activist as well as a journalist from Channel 10 news in Israel and a photographer. For a crew, we had two wonderful former Israeli air force pilots who were refuseniks.

We were hopeful we would land successfully on Gaza shores, and we were in contact with NGOs and Palestinian supporters in Gaza who were ready to welcome us. We were not afraid until – in international waters – we were surrounded by Israeli battleships, intercepted, boarded and towed to Ashdod where we were arrested. We were then briefly imprisoned and eventually deported. One of the refuseniks was viciously tasered.

How do you respond to the accusation of people such as Israeli Prime Minister Benjamin Netanyahu that to be opposed to the policies of the State of Israel is to be anti-Semitic?

It is important to remember that those who stand up for human rights and protest the Israeli occupation are not anti-Semites. This is the way the Zionist government uses domestic terrorism to frighten people who stand up and say “NO” to the suppression and abuse of Palestinians. We cannot remain silent, and when we are confronted by these ignorant responses we must make it clear that we are not anti-Semitic Jews. We must resist this attempt to stifle resistance. We cannot allow fear to keep us silent.

You include some of your poems in your book. Can you expand on the final line in a 2011 poem, “No Freedom in the Land of the Lost Prophets”: “I remember another time, “No Jews Allowed.” Germany nearly / succeeded. / Now false prophets decree Arabs not allowed, a Zionist story. / No Palestinians to live with dignity for “we” are the chosen / people. / It’s written in the Old Testament.”

There is an attempt in this poem to show the destruction created by two racist, nationalistic ideologies. One has stated “Deutschland Uber Alles” – that Germans are a superior race. The other is an ideology that lays claim to be the “chosen people” for whom God says the land of Israel/Palestine is for Jews only. This is blind nationalism and the claim of divine destiny on a destructive course.