The criminalization of poverty by the mass incarceration system is slowly changing, but you can hear the creaking. In this exclusive interview with Truthout, author Peter Edelman discusses some of the more egregious scams inflicted on the poor and prospects for reform.

Mark Karlin: Why is Ferguson, Missouri, a symbol of the criminalization of poverty?

Peter Edelman: The killing of Michael Brown coincidentally brought to daylight that city’s seemingly bizarre method of obtaining revenue: arresting its populace over and over for minuscule offenses — especially its African American community — and then hitting them with exorbitant fines and fees and jailing them when they are unable to pay. The practice, including extensive drivers’ license suspensions, had been occurring nationally, but few were aware of that. It had begun with the anti-tax movement in the Reagan years, which had caused court systems and entire state finance structures to turn to charging the systems’ “customers,” but people hit with fines and fees in their own municipalities thought it was a local phenomenon. Some lawyers and public officials (especially judges) and journalists gradually caught on and the problem accelerated with the Great Recession. Ferguson broke it open.

Arrested on minor matters, people are held in jail on bail for $500, $1,000 or much more, and their only path out is to plead guilty.

It is a government-operated loan shark operation. Slapped with court debts that easily begin at $1,000, counting fines and fees both, people are hooked. Not able to keep up with payment plans, more is added with interest, fees for phony probation, public defenders and additional fees, and fees for room and board. The court debt routinely increases to $5,000 and more. In many instances, time in jail comes from not making a time on a payment plan — in many instances, unconstitutionally. Money bail plays a big role. Arrested on minor matters, people are held in jail on bail for $500, $1,000 or much more, and their only path out is to plead guilty. That done, the defendant is then in the clutches of a payment plan, and the squeeze goes on and on. Nationally, the estimated toll is 10 million people owing $50 billion in court debt.

Fortunately, people are now fighting back. The awakening from Ferguson and the leadership from President Obama’s Department of Justice brought the fight into overdrive. Public-interest lawyers raised additional funds and attracted partners from the private bar. State chief justices and other public officials jumped in deeper, and journalists’ interest multiplied. Even as Trump’s DOJ has jumped ship, there is a momentum throughout the country and is headed in the right direction.

How do you describe the school-to-jail pipeline in your book and the intersection of poverty and race in terms of students?

Speaking generally, school discipline has always been meted out disproportionately for children of color and children with disabilities, with such children too often ending up in the not-very-just system. Matters got worse in the ’90s, especially after Columbine in 1997. Federal funds adding up to $750 million [is] paid for 6,500 School Resource Officers in 3,000 schools around the country, disproportionately in schools with large numbers of low-income children of color. The number of children — children with disabilities as well as those of color — who are now sent to court for scuffles that used to be handled in the principal’s office has skyrocketed.

During the 2011-12 school year, 92,000 students nationally were the subjects of school-related arrests … and 260,000 were referred to law enforcement, according to the US Department of Education Office of Civil Rights. These practices change the pipeline to prison into expressways. Sending children to juvenile court is bad enough, but in Texas and Wyoming, children are sent to adult courts. Regardless of the court, the outcome often includes levying fines and fees just as is done in criminal courts generally, and even more often results in collateral consequences that make a lifelong barrier to employment, public housing, voting, and more. 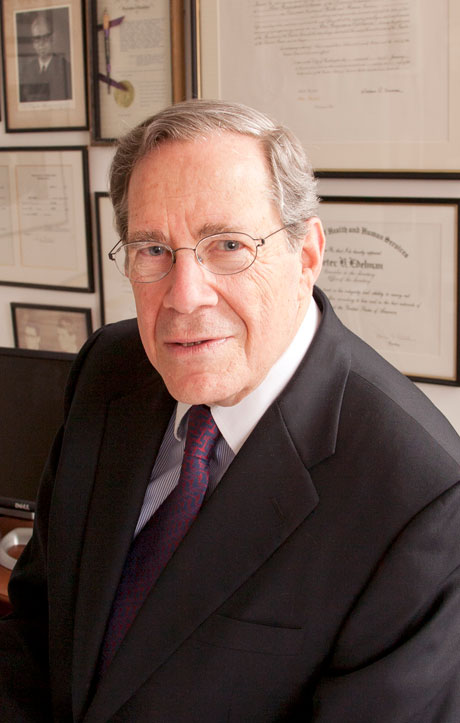 Peter Edelman. (Photo: Peter Patrice Gilbert)These things do not have to be.

There is a growing movement against money bail. Can you define money bail and its injustice?

Money bail is the money a defendant pays to make sure he or she will show up for trial, because the bail will be forfeited if the person does not show up. The usual scenario is that a bail bondsman sells a bond to the defendant. Even if the defendant shows up and he or she is found innocent, the person loses 10 percent of the bond to the bondsman regardless.

Most of the people who the judge says have to post bail are low-income people of color, and they are being held for $500 or $1,000 or more on junky stuff — low-level misdemeanors, very minor stuff. These are people who, along with their families, can’t come up with the money. There are 700,000 people in jail (not prison) every day, 11 million annually, and 450,000 of the 700,000 have not been found guilty — they are being held for trial.

So, what happens? They plead guilty when they’re not guilty because they want to get out. Now, having pled guilty, they may do time and owe a bunch of money … in a payment plan. What they don’t know is that they will owe a lot more — a fee to be on probation, for example. And that’s done in 44 states. It usually isn’t real probation services, it’s just about getting money. In 13 states, it’s for-profit, but that means 31 other states do it as public agencies….

Making “customers” pay in the courts and institutions is not limited to the for-profits. Almost all the states charge for “services” across the board.

What’s going on here? Money for the state or municipality’s coffers, for one thing. But there’s a dirty little secret about money bail: They can’t run the courts without squeezing those people to plead guilty. They don’t have the capacity to give everyone a trial. Not enough judges, etc.

Money bail is being attacked from multiple angles. A federal judge in Houston, Texas, held preliminarily that the Harris County system is unconstitutional, and the result so far is that more than 6,000 [people] have been released. On January 24, in an enormously important ruling, the intermediate appellate state court in California decided that the state bail system is unconstitutional.

Legislation is another angle. California’s legislature has a bill pending that would reform the state’s system, and many say it will be enacted this year.

[EDITOR’S NOTE: Grassroots activists are playing a vital role in holding the courts accountable. The Cook County Court system reformed bail for the poor last July. It is currently in the process of implementation. It is a victory for one of the many vigilant, active grassroots efforts in the United States to eliminate money bail used to incarcerate people who cannot afford it.]

To what extent are corporations making profits off the criminalization of the poor?

But it is important to understand that making “customers” pay in the courts and institutions is not limited to the for-profits. Almost all the states charge for “services” across the board — in the juvenile system, as well as the adult system. From paying the court for the work to run a trial, diversion, electronic bracelet while awaiting trial, probation and parole, law libraries, criminal administration fees — it goes on and on. For one example, Oklahoma has 28 fees. Florida added 20 fees in 1996 and has added more since. Forty-eight states have increased their fees since 2010. This is not a problem only of for-profit corporations.

How does the criminalization of poverty perpetuate poverty?

From many fronts. The fines and fees are the obvious thing. Take driver’s license suspensions, which almost all states use, although some are beginning to dial back what they have done. A person often owes $1,000 or much more because of the fees that are tacked on, and the underlying offense is often unrelated to driving or is something minor, like a broken tail light. They keep driving — they need to get to work, drive the children to school, and so on. They get arrested. The tab goes up and up, easily reaching $5,000 and more. That alone can push someone into poverty and keep them there.

And, of course, the defendant in the fines and fees world [experiences] collateral consequences…. There are 45,000 laws among the states and other jurisdictions. They make getting a job difficult to impossible. They keep people out of public housing and other public benefits. They often can’t vote.

Once you’re stuck — and especially if you’re poor to begin with — you’re likely to be stuck for the rest of your life.

In a society of increasing inequality, in which many people blame and shame the poor for their economic plight, how do you see an alleviation of making it a crime to be poor?

There is much more effort now than a few years ago, on mass incarceration itself and the other aspects of criminalization of poverty. I’ve mentioned some.

Some of the steps in the right direction are in places one might find surprising. Mississippi recently returned 100,000 suspended drivers’ licenses. The chief justice in South Carolina recently told the judges of the state to ascertain whether a defendant is able to pay a fine or pay for money bail. The Georgia Legislature passed a law in 2015 that tightened the actions of for-profit probation companies, and in 2017, the largest company pulled out of the state, saying it couldn’t make enough money any more. And there are others.

Turning to mass incarceration itself, a number of states have enacted sentence reform to reduce outsize terms. The biggest news is Proposition 47 in California, where the voters enacted a major reform of what is a crime at all, and also reduce sentence length on many items. Lenore Anderson, the lead organizer for Prop. 47, is now organizing toward similar voter initiatives in other parts of the county.

There is need for multiple players, and it exists and is growing. Public interest lawyers are now partnering with private law firms; there is a growing legislative response; there is much more leadership from state chief justices and judges…. All of that has to grow still more, and the challenge is to get the public at large to see the magnitude of the problem.