He’s absolutely right, of course. That said, the book is jargon-heavy and dense and would have benefited from concrete examples to illustrate exactly how philanthropies stoke injustice and serve the 1%.

Thorup is best on theory, and he begins by offering a definition:

Philanthropic capitalism is the idea that capitalism is or can be charitable in and of itself. The claim is that capitalist mechanisms are superior to all others [especially the state] when it comes to not only creating economic but also human progress; that the market and market actors are or should be made the prime creators of the good society; that capitalism is not the problem but the solution to all the major problems in the world; that the best thing to do is to extend the market to hitherto private or state processes; and, finally, that there is no conflict between rich and poor, but that the rich is [sic] rather the poor’s best and possibly only friend.

The prevalent notion that the rich are somehow deserving of the wealth they’ve acquired and are smarter, more creative, luckier and somehow better than the rest of us underpins these conclusions, and Thorup lambastes media presentations that fail to mention personal connections, as well as tax policies, “odious speculation,” questionable business practices, low wages and the rank exploitation that governs most financial gain. 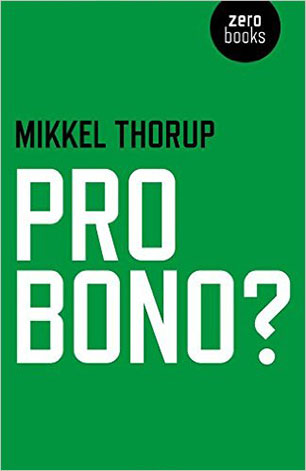 (Image: Zero Books)Take Donald Trump – vulgar, racist and rolling in dough – who is currently riding the high wire of public opinion, at least among Republicans. Although Thorup does not mention Trump by name, The Donald perfectly illustrates one of the book’s central arguments: that there is less questioning of the economic system or its profiteers than there might be. Examples of men and women who’ve soared, moving from poverty to power and from dropout to CEO, abound as if they were the norm rather than the exception.

This brings us to the next fallacy: that government efforts to ameliorate poverty are bureaucratic, inefficient and ineffective. The flip side of this is that business, with its unwavering fixation on the bottom line, is the opposite, and that by applying market principles to social ills, society can be cured of what ails it. Indeed, this idea is repeated with such regularity that it is almost universally accepted throughout the United States and Europe.

Concomitantly, the belief that individual consumption can change the world – buy “green” and save the planet, buy “red” and help those with HIV/AIDS – in lieu of social movements, is similarly absurd. “Are people really suffering and dying of preventable diseases because affluent Westerners have failed to consume enough products?” Thorup snipes. “Is the environment, and the climate most of all, best served by ‘smarter’ consumption?” Or would the planet be in better shape if we shopped less and conserved more?

Thorup gives a resounding “yes” to this rhetorical question.

The belief that individual consumption can change the world in lieu of social movements is absurd.

At the same time, he nurtures great skepticism, bordering on contempt, for celebrities such as U2’s Bono, actress Angelina Jolie and music producer Bob Geldof, for using their wealth to draw attention to social problems. “They may criticize unrepresentative power,” Thorup writes, “but are so themselves. They may criticize inequality but are dependent upon it themselves. They may ally themselves with the poor in campaigns but their lives are spent rubbing shoulders with the rich and mighty.”

Thorup calls their actions “spectacle politics” and perhaps they are. But I’m not convinced since these folks are not obliged to do anything for anyone. Ever. And while their work is certainly not the solution to poverty, illness or want, I don’t believe that it deserves the drubbing Thorup metes out. Still, this is a small criticism.

More important are facts, and Thorup reminds readers that the world’s richest 85 individuals earn more than the bottom 50 percent of the world’s people. Philanthropy is not poised to do anything about this obscenity. That’s where community organizers and organizations, as well as government, come in. With its power to tax the rich, rein in corporate abuse and support the creation of necessary social and cultural institutions, government can work for the majority and enhance our lives.

Right now, however, state and city governments pander to corporations and the rich for money to build and maintain schools, endow museums and build housing for the poor. And community organizations, including the alternative press, are forced to follow suit, as well. In fact, if my inbox is representative, it’s obvious that groups far and wide are constantly on the lookout for benefactors to keep them going, with no contribution too small to matter.

It shouldn’t be this way, says Kim Klein, author of Fundraising for Social Change. “We have become a medieval patronage society in which we depend on the largesse and generosity of the super wealthy for way too much,” Klein told Truthout in an email.

“Mark Zuckerberg’s donation to the Centers for Disease Control [and Prevention] to help fight Ebola was very helpful, but do we really want one of the most major public health issues of the last few years to depend for resolution on the gifts and grants of private individuals and foundations? Ditto education. There needs to be much more conversation about the role of government, of taxes, of philanthropy – of what should be funded privately, what should be funded publicly, and what can be funded at a net gain by both?”

I am certain that Thorup would wholeheartedly agree.

Share
Copyright, Truthout. May not be reprinted without permission.
Eleanor J. Bader