Iraqi oil workers are the backbone of the industry that produces most of their country’s wealth. And since the US invasion and fall of Saddam Hussein, they’ve also organized its strongest and most vocal union. They’ve shut their industry down in the past, successfully challenging Halliburton during the US occupation and forcing it to leave Iraq. To try to stop Iraq’s government from signing unfavorable contracts virtually handing over the oil to foreign transnational corporations, they shut off the oil spigots again after the US withdrew.

Now it looks as though another shutdown is looming. On December 10, more than 3,000 angry oil workers surrounded the headquarters of the Southern Oil Company (SOC) in Basra. The SOC is a huge, state-owned enterprise that acts as an intermediary between the Iraqi Oil Ministry and the foreign transnationals who operate the concessions to drill wells and pump the oil out into waiting ships. The SOC’s multistory building towers over Basra, an ancient city that lies at the heart of huge fields of Rumaila, Qurna and others.

Part of what brought these weathered veterans of the drilling rigs into downtown Basra is the continuing illegal status of their union. “The government wants to destroy our union,” Hassan Juma’a Awad, president of the Iraqi Federation of Oil Unions, told Truthout in a recent interview. “They will not allow us to work as a union. Law 150, passed under Saddam Hussein, is still being enforced, and the Iraqi government uses this law to prohibit the operation of Iraqi unions. Another law, special to our union, doesn’t allow the workers in the general labor department to join.”

Other demands dramatize the fact that although these workers produce Iraq’s wealth, they still live in squalid conditions, working for low salaries. “We have a set of demands that should be answered, but the most important of them are dues [wage bonuses] correlated to annual profit, and the provision of housing and worthy residential buildings for staff, risk and rotation allowances, in addition to incentive pay,” Mahdi al-Jabri, one of the organizers, told the Iraq Oil Report. “It would have better for the ministry to answer our demands instead of procrastination and the formation of committees, which basically did nothing and didn’t agree on anything.” 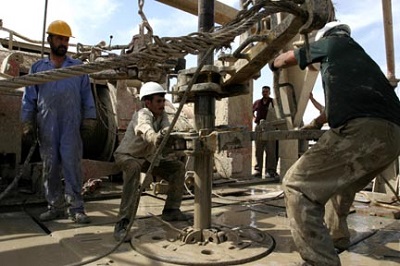 Oil workers clamping new pipe sections above a drill bit. (Photo: David Bacon)This time, instead of mounting a complete, open-ended strike, oil workers are using a strategy chosen by workers in many other countries. They are organizing limited protests of two hours a day, for two weeks, to dramatize their case and try to move the Oil Ministry. Because the workers actually work at the drilling sites operated by foreign companies, the protests will take place there, drawing the companies into the conflict. The union also has brought its case to provincial and local government bodies, as well as to members of the Oil Committee of the Iraqi Parliament.

While the protests continue, so do efforts to get Parliament to finally adopt a labor and trade union law, finally abolishing the anti-labor restrictions of the Saddam Hussein and US occupation eras. Yet even as this possibility appears within reach, the situation of trade union leaders in the country’s most important economic sector – oil – seems as tenuous as ever.

On November 10, 2013, a court in Basra dismissed, for the second time, charges against Hassan Juma’a. But Ibrahim Rhadi and 16 other union activists are still being prosecuted and face fines totaling more than $600,000, an impossibly large sum for oil workers to pay. Rhadi’s fine alone is $30,000. “If Ibrahim doesn’t pay, he’ll be fired from his job,” Juma’a says. “Then they will put him in jail.” 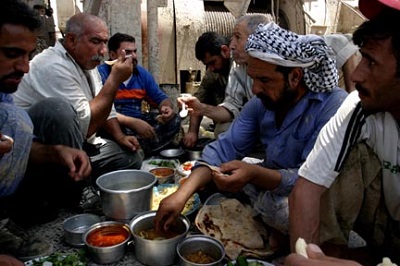 Oil workers eat lunch in a communal style on the drilling platform. (Photo: David Bacon)The charges stem from protests organized by the union early in 2013, when hundreds of workers demonstrated on three occasions outside the SOC building, calling for its director and his aides to resign. Workers accuse the company of refusing to pay contractual bonuses due since 2010 (more than $303 million) and reneging on promises to build housing or provide medical care, especially for workers suffering exposure to depleted uranium used in the war. SOC and the transnational companies entering Iraq to exploit the oilfields have hired temporary workers instead of permanent employees, to avoid requirements that 85 percent of the workers be Iraqis.

The strikes were fueled by poverty among oil workers, despite the billions of dollars in oil they produce. “Iraqi workers are in a very unstable situation,” Juma’a charges. “Our wages are very low – we can’t live on the salaries we make. There are no social guarantees or health insurance. There is no modern labor law to give us our rights. At the same time, there is no law to protect the many temporary workers either.”

When charges were brought by SOC against the union, the court dismissed them in July because the company could provide no evidence that the union caused any damages. The company appealed, and a higher court ordered the charges reinstated. On November 10, the lower court again noted that the company had provided no evidence, and dismissed the charges a second time. “The government put charges against me because of the strikes,” Juma’a says. “I told workers to demand their rights and was accused of organizing an illegal work stoppage because I’m the union president.” 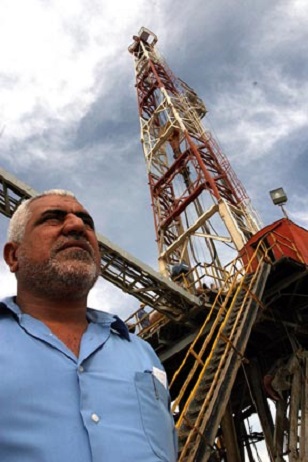 Hassan Juma’a Awad, president of the oil workers union. (Photo: David Bacon)Meanwhile, however, the Ministry of Oil, which owns and directs the SOC, imposed administrative fines on Rhadi and the others, in retaliation for their roles in organizing the protests. Another SOC worker, Alaa Abdul Redha, was stripped of benefits and transferred to a distant location, a punishment used against other oil union activists in the past.

The oil union in Iraq is hobbled in its efforts to bargain for its members and to defend them against criminal and administrative punishment for their union activity, because it is still subject to Saddam Hussein’s notorious Law 150. Passed in 1987, it forbids unions in the public sector, which encompasses 80 percent of all industry, including the state-owned oil sector.

In 2005, the country adopted a constitution that requires the government to permit unions, but no labor and union law has been passed that implements that goal. Meanwhile, Law 150 remains on the books, as it did through the US occupation. Unions with no legal recognition have immense problems collecting dues and opening offices. “We can open a bank account, but the government blocks us from using money contributed by unions in other countries,” Juma’a explains.

To coordinate efforts to win a new law, six Iraqi unions joined the international labor federation, IndustriALL Global Union, and in July created a new National Council in Baghdad. IndustriALL Assistant General Secretary Kemal Özkan met with Iraqi government officials to press them to act. “If the trade union legislation is not adopted now, nobody knows when the next opportunity will be, and we cannot wait years and years for this,” he told them.

Jyrki Raina, IndustriALL General Secretary, says, “There is now a unique opportunity for the national parliament to prove the past is in the past. IndustriALL and affiliates across the globe will continue to campaign on these issues until Iraqi workers’ rights are fully respected.” International Trade Union Confederation General Secretary Sharan Burrows criticized some drafts for “failing to address the major flaws of the Hussein-era legislation, including to extend the legal right to freedom of association to the vast public sector. This is unacceptable. We urge the parliament not to squander this opportunity to at last bring its laws into line with international standards.” 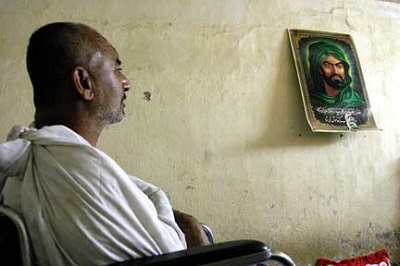 A disabled oil worker in a wheelchair at home. (Photo: David Bacon)Juma’a says action is urgently needed – to defend Rhadi and the other leaders and to get the new law passed. “In August, they promised they’d issue the labor law in a few days. But then they removed the chapter governing unions. We visited the lawmakers and gave a copy of our proposal to the labor committee and the president of the Parliament. The two laws were then issued at the same time. One governed things like the work day and the other the freedom to form unions. But if it’s not issued now, it might take another four years. It took a lot of pressure from workers to get this one here. That’s why the law was even sent to Parliament. We don’t want to lose it now.”

In April 2014, Iraq will hold national elections, and a new Parliament will be elected. If the labor and union laws aren’t adopted by the current Parliament, the legislative process will have to start over again from scratch. That not only inspires a sense of urgency among the workers and their union, it also is leading some politicians to campaign among them, appealing for their support. One of them, Basra member of Parliament Susan Saad, told the Iraq Oil Report that she had urged Prime Minister Nouri al Maliki to agree to the workers’ demands. “We fear the Oil Ministry,” she said, “is taking arbitrary and retaliatory action – like firing or relocating workers, as happened in previous protests – instead of considering their demands.”

Copyright David Bacon. May not be reprinted without permission of the author.