It was a lot less street theater this time around, and a lot more action. On December 20, emboldened by the success of anti-eviction protests against a “Google bus” in San Francisco’s Mission District the week prior, residents and activists in the Bay Area organized simultaneous blockades of “tech buses” in the Mission and Oakland. In Oakland, Google buses were targeted, while residents of San Francisco prevented a bus bound for Apple’s main campus from moving for over a half hour. Residents in the Bay Area continue to struggle against crippling evictions and displacement brought on, in large part, by the influx of well-to-do tech industry workers.

Residents are increasingly starting to view the tech buses as symbols of gentrification and of their own seemingly inevitable displacement from their homes. These buses, luxury double-deckers provided for free to employees of companies like Google, Apple and Facebook, among others, shuttle workers to places like Palo Alto and Cupertino. Police turn a blind eye while tech buses pick up and drop off residents in San Francisco and Oakland, illegally using public MUNI bus stops. If a resident of the area were to even idle in one of these areas for a moment, they could be fined $271, as many have been. Organizers of the campaign insist that at this point, tech companies owe the city of San Francisco over $1 billion in fines for this behavior.

But beyond the fines, or the blatant disregard for the law, the real issues lie much deeper. In the eyes of longtime residents of classically working-class neighborhoods like the Mission and West Oakland, these buses reflect the class struggle going on in the Bay Area. Tech workers are shuttled to their jobs in suburbs 40 miles away on special, luxury buses. They often eat for free in gourmet cafeterias on the campuses of their employers. Residents feel like the tech workers are moving into their neighborhoods, not engaging with their culture or history or even supporting local businesses and are rapidly pricing them out of their homes. 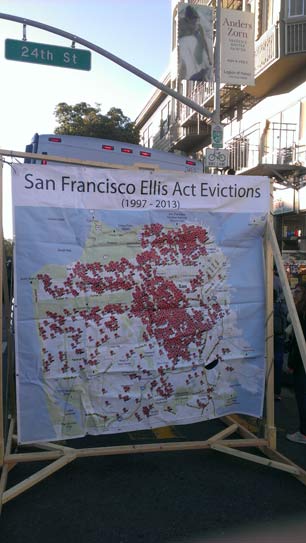 Demonstrators displaying a banner listing evictions from 1997-date caused by San Francisco’s controversial “Ellis Act”. (Photo: Christopher Longenecker)Last week’s protest in San Francisco went viral, in large part because of a piece of ad-libbed street theater by union organizer Max Alper. The press coverage opened up a space to talk about the industry’s effect on the city that didn’t exist a week ago. Nick Statt, writing about Max’s performance for the most mainstream of tech blogs, CNet, summed up the feeling nicely. “The real takeaway is that we all wanted it to be true.” There is a moment now where tech industry folks are pausing to reflect on their impact on communities they choose to move to. And rather than rest on their successes, protestors are turning up the heat.

This time around, the organizers were all business. About three times as many people showed up for the action as did last week. And organizers were quick to make use of the added numbers. A full-on blockade ensued, with 10 folks initially blocking the bus in place with a banner reading “Eviction Free San Francisco.” Minutes later, a rowdy march of about 50 more thundered down the street, armed with megaphones, signs and drums. A coffin was laid in front of the bus, reading “Affordable Housing.”

Banners were displayed around the bus as protesters surrounded it on all sides. Once the blockade was comfortably in place and it became abundantly clear the bus was not about to head to Cupertino any time soon, the main event started. Organizers had parked a pickup truck with a powerful sound system directly in front of the bus stop and began a rally. Residents facing eviction spoke, invigorating the supportive crowd. Even the police seemed hesitant to stop the action, timidly asking protestors to get off the street once every few minutes, but making no real effort to stop the rally for quite some time. The worst they ever threatened the protestors with was a traffic citation. Protestors abandoned the blockade after 30 minutes, on their own terms, declaring a victory.

Perhaps the most informative and startling symbolism invoked by the group was an 8-foot-tall map, detailing evictions in San Francisco from 1997-2013 under the city’s “Ellis Act.” This act states that landlords have the unconditional right to evict tenants, as long as the entire building is evicted and the units not re-rented for 5 years. But if the building is re-purposed, say to turn an apartment building into a condo complex, a single family home, or even office space for the tech industry, the landlords can raise the rent to whatever they choose. Residents say the Ellis Act is in large part responsible for the affordable housing and eviction crisis in the city. The act has been on the books since 1985 and has, to date, withstood numerous legal and legislative challenges.

Organizers in San Francisco expressed enthusiasm that folks in the East Bay had picked up the call to blockade tech buses around the metro area. “San Franciscan tenants and organizers are well aware that the gentrification leading to mass displacement in San Francisco is also leading to mass displacement and gentrification in the East Bay. Our fights here are directly related to fights there,” said Erin McElroy, an organizer with Eviction Free San Francisco and the Anti-Eviction Mapping Project.

Minutes before the San Francisco activists stopped the Apple bus in its tracks, residents across the Bay were already making their voices heard. At the MacArthur BART station in Oakland, 50 protestors blockaded a bus bound for Google’s headquarters in Mountain View. Shortly thereafter, another tech bus rolled on by. Needless to say, they too, found themselves delayed by the protesters. Those in Oakland held the buses up for over a half hour before police were able to shut the action down and permit the buses to proceed. One of their more informative banners read, “Capital is the driver. Gentrification is the vehicle. Techies on the bus.”

But that wasn’t all the tech buses would have to deal with on this chilly Friday morning in the Bay. In West Oakland, a small group of individuals boarded a Google bus. They unfurled banners reading “TECHIES: your world is not welcome here” and, more to the point, “[email protected]% OFF GOOGLE.” They left relatively quickly, perhaps leading passengers to believe they could proceed with their workday undisrupted. This was before the bus had its rear window smashed and its tires slashed. The workers ended up having to stay put for nearly an hour. No one was reported harmed in this distinctly Oakland-style blockade.

When asked why the bus blockades are so important to the future of the Bay Area, Elisa Gill from the East Bay Solidarity Network offered the following insights: “Tech is the new ruling class in San Francisco. They see themselves as progressive culture-makers, but they’re the same as the bankers and oil barons of days past – they profit off the backs of the working class of San Francisco. We’re blocking this bus because we’re not going to allow them to take over our city.”

By 9:30 AM, at least four tech industry buses had been disrupted and delayed. Five times as many people participated in the protests as had the previous week, and they had now expanded to Oakland. New tactics were employed; new solidarity networks formed and the struggle against gentrification in the Bay Area got kicked up a notch. Last week, a national conversation grew louder around displacement in the Bay Area’s classically working-class communities. This week, activists and residents showed that conversation is not enough, and they put their bodies on the line to demand action.

Share
Copyright, Truthout. May not be reprinted without permission.
Chris Longenecker

Chris Longenecker, based in Boston, MA, is an agitator, organizer and freelance writer. He is a founding member of Occupy Wall Street’s Direct Action Working Group. His work has appeared in Truthout, Waging Nonviolence, The Indypendent, Common Dreams and the Anarcho-Syndicalist Review, among others. He blogs at www.chrislongenecker.com and tweets @CLongenecker.