On a cold sunny morning in April, Isabel Escobar, a 57-year-old house cleaner, boarded a bus with 30 other women in Chicago, bound for the Illinois State Capitol in Springfield. All of these women are domestic workers — nannies, house cleaners or caregivers — who were recruited by Escobar from their church to join her on this trip. Like domestic workers in several states across the country, these women are fighting for legislation that can help improve their working conditions and their way of life.

While the enactment of the legislation in Illinois would be a victory, it is the activism itself — the tireless advocacy of women like Escobar in Illinois and others in cities and states throughout the country — that continues to be the most poignant outcome of domestic workers’ organizing. The leadership of women workers like Escobar is transforming the domestic work sector.

“There’s too much wage theft in domestic work.”

In 2008, Escobar stood up for herself against a man for whom she worked as a house cleaner for seven years. According to Escobar, her employer owed her more than $10,000 in back wages. When Escobar finally broached the issue, her employer offered her $1,000. Escobar would not relent and pushed for the full $10,000. That’s when her employer threatened to report her to immigration officials and have her deported.

The threat of deportation is often used to intimidate workers who demand fair treatment — but Escobar took her employer to court. She had the support of groups in Chicago including the Latino Union and Arise Chicago — workers’ rights groups that she had connected with through friends she had made at Centro Romero. Ultimately, the judge granted her a $10,000 settlement and told her employer he had no case.

“I don’t want other women to be in these types of situations,” Escobar said. “There’s too much wage theft in domestic work.” 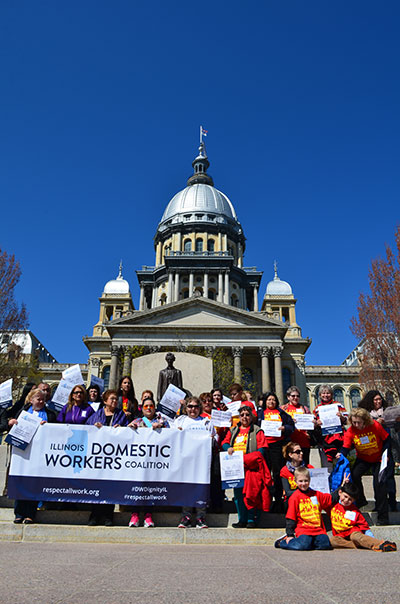 Domestic worker leaders and allies rally in front of the Illinois State Capitol. (Photo: National Domestic Workers Alliance)Her experience informed Escobar’s desire to improve working conditions in the domestic work sector as a whole — a sector that historically has been deliberately excluded from labor protections. Illinois’ current labor legislation quite literally states “except domestic servants in private homes.” The Illinois Domestic Workers’ Bill of Rights would cross these words out.

But laws are also shaped within a constraining political context.

“My bill originally asked for much more for Illinois domestic workers, but to get it moving in the legislature, we had to negotiate,” said State Rep. Elizabeth Hernandez (D-Chicago), the chief sponsor of HB1288.

Hernandez’s original legislation, which she proposed in 2013, sought more comprehensive provisions like advance notice of termination, eight hours of uninterrupted rest per day for live-in care workers and access to bathroom, laundry and kitchen facilities. Concessions were made to achieve a bill that more lawmakers would view as “common-sense” legislation. As a result, the proposed legislation will simply include domestic workers within the state’s existing minimum wage law, a law requiring one day of rest per week, and laws protecting workers against discrimination and sexual harassment.

And ensuring enforcement of the Illinois Domestic Workers’ Bill of Rights will continue to be an ongoing effort.

“I’m in conversation with our Illinois Department of Labor about how we can ensure enforcement, and it’s something we’ll have to work on,” Hernandez said.

Indeed, due to the Illinois Department of Labor’s concerns about effective enforcement of the new protections for domestic workers, the Illinois Domestic Workers’ Bill of Rights now includes an amendment to ensure that it will become effective on January 1, 2017, rather than becoming effective immediately. This amendment will build in more time to plan for enforcement. According to Illinois domestic workers’ advocates, there is no other major opposition to Illinois’ Domestic Workers’ Bill of Rights.

Given the limitations of laws, empowering workers to stand up for themselves, to advocate for their women colleagues and to build broad coalitions the way Escobar is doing is equally critical to enacting legislation.

Illinois domestic worker activists at the Latino Union, Arise Chicago and AFIRE engage in deep organizing, know-your-rights trainings and coalition building that can help empower workers to advocate for themselves. The Latino Union was founded by women day laborers in 2000. Groups like the Latino Union organize domestic workers where they are — in parks, bus stops or other community locations.

Myrla Baldonado, a former caregiver for the elderly in Chicago who earned $5 per hour for many years, founded and led the Latino Union’s Chicago Coalition of Household Workers, a multiracial group that trains African-American, Asian and Latino and Latina home care workers around workplace safety, negotiating with employers and self-care practices.This group was also part of an effort to reform Chicago’s minimum wage legislation in 2014.

“Now as an organizer of domestic workers, I have the capacity to understand all of the issues because I have this lived experience,” Baldonado told Truthout. “I can lead worker trainings because of my experience.”

In addition to empowering more women like Escobar and Baldonado to lead, Illinois activists at the Latino Union, Arise Chicago and AFIRE are forging relationships with more employers of domestic workers. As a result, some employers develop their own guidelines and practices to help ensure protections for domestic workers — whether or not there are laws on the books.

Peggy Slater, 71, employs domestic workers and is active with her Chicago synagogue, Congregation Hakafa, which has a worker justice committee. Slater’s longtime housekeeper, Dorothy, is currently out on paid medical leave receiving treatment for breast cancer. Dorothy’s ability to take medical leave is in stark contrast to many domestic workers, for whom health problems can mean significant loss of income. 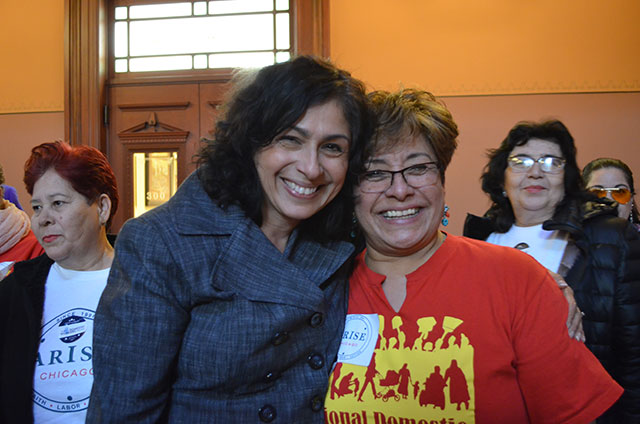 “I support the Illinois legislation because it is so foundational,” Slater told Truthout. “I am dismayed that it is so basic that we weren’t able to include more protections but you have to start somewhere.”

Congregation Hakafa’s worker justice committee, in collaboration with domestic worker activists in Illinois, developed their own set of employer guidelines that will inform members of their congregation as they hire nannies, housekeepers and caregivers.

“In our guidelines, we ask people to be thoughtful so that decisions they make conform to our values,” Slater said.

The two-page guidelines lead with a quote from Rabbi Abraham Joshua Heschel: “Labor without dignity is the cause of misery; rest without spirit, the source of depravity.” The guidelines urge congregation members to pay a living wage of $15 per hour (whereas Illinois’ minimum wage is currently $8.25 per hour). They also urge congregation members to adopt clear written agreements with domestic workers about work expectations, seek out translators if there are language barriers, provide paid time off and ensure the domestic worker has access to health care.

The guidelines provide contact information for the Latino Union of Chicago and the National Domestic Workers Alliance so that employers of domestic workers can seek out additional information.

Fostering awareness among employers is critical for domestic workers so that more are entering places of work that are, as Slater says, “informed and intentional in their decision-making.”

“Our congregation started looking at living our Jewish values in our homes and our communities and in the world at large,” Slater said. “And it was clear that we should start in our own homes. This is economic justice for those who we employ.”

Indeed, core to the economic justice and organizing principles of the domestic workers’ movement is elevating women workers. Ai-jen Poo — director of the National Domestic Workers Alliance, the umbrella group of 45 affiliates like the Latino Union — told Truthout:

Our organizing model is intentionally focused on the conditions facing women of color, immigrant women and poor women. These women have to finally play a leadership role in what our economy looks like. We need a democracy that is multiracial, that is finally built on inclusion and not on exclusion.

Activists like Escobar are fighting for new laws at the local and state level, but they are also helping to imagine a new style of leadership in US democracy — one that is finally centered around the lived experiences of women of color.

Share
Copyright, Truthout. May not be reprinted without permission.
Sheila Bapat