As hundreds of protesters slowly marched to Mayor Rahm Emanuel’s Ravenswood neighborhood in Chicago, news trickled in over Twitter that three young NATO protesters recently arrested had their bail set at $1.5 million and were being charged with terrorism-related offences.

The marching protesters were angry and disappointed. Some feared the media’s attention would focus solely on the act of three young men instead of the acts of hundreds who were marching to oppose the closings of six mental health facilities all across the city.

Hosting NATO will likely cost the city an estimated $55 million, and health advocates claim only a fraction of that bill, around $2-3 million, is needed to keep these facilities open.

Basically, priorities are skewed, or as Occupy puts it: “Shit is f-d up and bullshit”.

Not only are mental health facilities being shuttered, but students are being crushed under a mountain of student debt, while people are losing their homes, and the U.S. government continues to pour billions of dollars into foreign assaults and occupations. 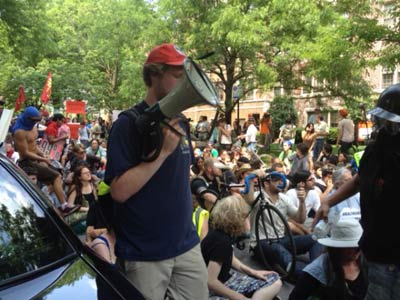 “I am participating in this because I oppose the risky behaviors and pro-Bourgeoisie mentalities of the whole Reagan era, extending into the Bush era, and now even the Obama era. That whole attitude of if we take care of the wealthy, it will somehow get to the poor when it’s obviously not helping,” said Caby.

“You see the wealth gap in the United States rising ridiculously, even compared to global southern countries. It needs to stop,” he said.

At a time when things are so bad for so many people, I asked Caby why more people weren’t protesting in the streets. Protesting students in Quebec recently struck so much fear into the hearts of their leaders that the provincial government passed an emergency law restricting demonstrations and shutting some universities to buy officials time as they desperately seek to put an end to three months of spirited protests.

“I was talking to some individuals last night, and they were afraid of the police presence, so I think it is that fear of the police state that we have that if they step in the way, they can be harmed, or it could damage their future by getting a record or something,” Caby explained.

For many protesters, the march wasn’t in the name of some distant, abstract notion, but rather a fight for life over death.

Debbie Delgado, a former patient at Northwest Mental Health, which closed in April with five other city-run facilities across Chicago scheduled for closings, wore a hospital gown and carried a sign that read, “How much is a life worth”?

Delgado lost a son to gang violence in 2006, who died in the arms of her other son, who subsequently suffers from PTSD. Now, Delgado protests on behalf of herself and her son, who refuses to look for another yet-to-be-closed clinic.

Delgado was one of 23 activists arrested for occupying the Woodlawn Mental Health Center in early April.

“We have people dying at home. [Emanuel] has split us to different locations…and it takes us eight miles to get there now,” Delgado said when describing life in a post-Emanuel world, adding she’s sickened by the amount of money spent on security for NATO officials when poor citizens are having their basic services terminated.

“I’m very angry about that because we voted for Emanuel, but now that we need him, he’s shutting us down. You hear in the news that he’s talking about planting flowers downtown or fixing up the Cubs’ area, but why can’t you use that money here to save lives?”

Delgado talked about the difference in care between previously public-run facilities like Northwest Mental Health and privatized care. She claims the Mental Health Movement has seen two suicides since the closing of clinics began, and more individuals are getting lost en route to their new clinic destinations.

Furthermore, the new care is unaffordable

“It can cost as much as $100, per session, for a therapist,” said Delgado, a skyrocketing cost considering the public facilities used to provide the same care for free under Medicare.

“People can’t afford that because they’re low-income,” she said.

“I’m here to continue fighting because some of them don’t have their medication because they fired the doctors, the nurses, the therapists, and everything, so these patients are out of medication, and when we went to the Daley Center three weeks ago to tell them we need medication, Emanuel had us arrested,” said Delgado, adding, “In one year, he destroyed so many lives.”

Protesters marched peacefully through the streets of Emanuel’s neighborhood before sitting in the street before his home where a phalanx of Chicago police greeted them, dressed in riot gear.

Despite the presence of police and hundreds of protesters, for the time being, the CPD have shown great restraint in dealing with activists.

Police have made their point in other ways. It’s common knowledge among protesters that the police possess an LRAD device, or sound cannon. CPD casually parked horse trailers nearby the protesters’ gathering spot today before the Rahm march. Photographer Zach Roberts posted a photo of an armored vehicle resembling a tank to Twitter after the CPD apparently parked it in plain sight of photojournalists. Helicopters constantly fly overhead marches.

It seems the CPD have figured out bashing protesters across their heads isn’t necessarily the only way to convey they have total control of the city.

Standing before the row of riot police gathered at Ravenswood was a young man dressed in fatigues, two gold medals gleaming on his left shoulder.

Sargent John Anderson is one of the veterans who will be ceremoniously returning their medals on Sunday to NATO’s generals. Though not a member of Iraq Veterans Against the War, Anderson said he intended to march with the group tomorrow in solidarity.

“I’m here because these are the people I fought for. I did not fight corporate interests, and when I realized I was fighting for corporate interests, I had to find another way to fight for these people,” said Anderson before explaining why he intended to return his medals.

“I’m going to return my Global War on Terrorism and my Iraq Campaign medals. The Iraq Campaign medal, I feel like we have no business being there and we created a lot of problems and caused a lot more instability. Of course, the situation wasn’t ideal when we went in, but it’s far from ideal now. I had no business being there. We have no business being there, so I don’t want it anymore. The Global War on Terror: pretty much it’s the result of our poor domestic and international affairs and the way we exploit different people throughout the world. If we handled our ways differently, then we wouldn’t be in this situation right now.”

I asked Anderson what moment, or moments, inspired him to try life as a protester.

“I was studying history and we read about World War I, and there’s something called the December Christmas Truce of 1914. At the time, the Germans and the French were fighting, I believe in Belleau Wood, and around Christmas time, the troops started exchanging gifts and singing carols back and forth, and on Christmas Day, they ended up having a Christmas party in No Man’s Land, playing football and things like that. It really caused me to question the entire idea of a friend and an enemy, and really what it means to be a human being.”

The other moment occurred when Anderson was doing some training in the middle of the desert during his second deployment.

“I had seen all of these major corporations come in: Halliburton, KBR, Honeywell, Raytheon, all of these big names that you always hear about. They’re over there just raking in money when there’s really not a whole lot going on. I’m sitting here, doing these training exercises, and I just realized how absurd the entire thing really was,” he said.

Like his civilian protester counterparts, Anderson thinks the amount of money being spent on NATO and the military budget is absurd, especially during a time of austerity for the 99 percent.

Share
This article may not be republished without permission from Truthout.
Allison Kilkenny