The Edison Electric Institute is an inherently political organization, and a powerful one. At $90 million, its budget is the highest it has been in over a decade — a budget that the nation’s electric ratepayers have helped fund.

The Energy and Policy Institute’s latest report explores how regulated investor-owned utility companies are including their EEI annual membership dues in their general operating expenses. This widespread practice results in ratepayers subsidizing the political activities of EEI, with which they may not agree and from which they may not benefit.

Missouri Public Service Commission staff filed in a recent Ameren Missouri’s rate case that while ratepayers may receive some benefit from membership in EEI, “the membership appears to primarily benefit the Company and its shareholders.” Staff recommended during rate case proceedings that all dues be disallowed.

The report adds more evidence for commission staff and intervenors that have attempted to protect ratepayers from paying for political activities. The report includes EEI’s own annual reports, which have been provided by EEI to its members, that reveal the “results” the trade association achieved. The objectives have included working to reform electric rates and advocacy for increased fixed and demand charges. Other priorities dealt with EPA regulations, tax issues, litigation efforts, and outreach activities to “minority and community organizations.” Some of these expenses might fall under what EEI reports as lobbying and nondeductible expenses to its members, but many of them likely would not (see 2012 results; 2013 results; 2014 outlook; 2015 results; 2016 goals).

Data from EEI’s annual reports to the IRS reveal that from 2004 through 2015 EEI spent a total of $130.6 million for nondeductible lobbying and political expenditures, which is an average of 14% of its total expenses during that period ($909.8 million), or an average of 17% of total dues from its members ($759.4 million). The annual lobbying/nondeductible percentage is what EEI notes on its invoices to the investor-owned utility companies, which then are used as justification for the utility’s proposed shareholder/ratepayer allocation of payment. 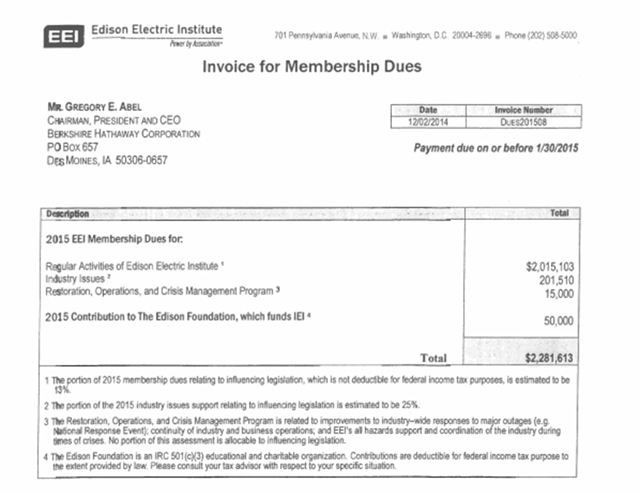 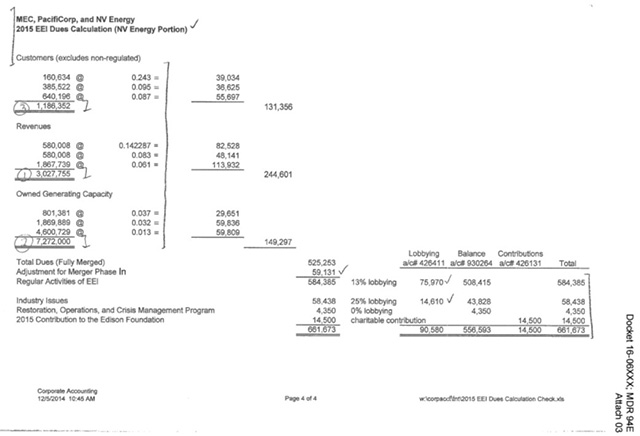 However, EEI engages in and incurs expenses for a host of other political activities that are beyond the set of costs that are categorized as nondeductible section 162(e) dues. In fact, the report shows that in the most recent year from which we have a detailed breakdown, nearly 70% of EEI’s expenditures were categorized as legislative advocacy; legislative policy research; regulatory advocacy; regulatory policy research; advertising; marketing; public relations. 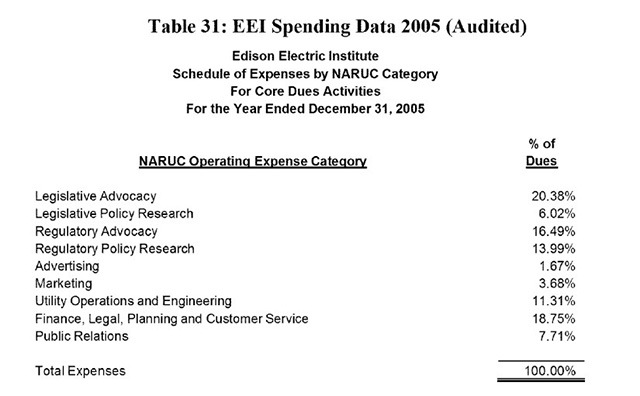 That breakdown of expenses is known thanks to investigations and then audits by the National Association of Regulatory Commissioners (NARUC). Indeed, for a time between the 1980’s and early 2000’s, NARUC investigated EEI’s misuse of utility customer money for lobbying and public relations. This led to NARUC conducting annual audits of EEI’s financial records. The result was a system of compromise where, based on NARUC’s annual audits, regulators ruled that utilities could collect a significantly smaller portion of their EEI dues from ratepayers.

But over a decade ago, the NARUC audits stopped and consumer advocates have since had difficulty in fully understanding how EEI spends ratepayer money.

Nevertheless, consumer advocates and regulatory staff have continued to use the last-known NARUC audit when intervening to protect customers. For example, William Marcus, on behalf of The Utility Reform Network, proposed allocating 43.3% of EEI dues to shareholders rather than the 25% proposed by Pacific Gas & Electric in the 2014 general rate case. Marcus stated that “after a series of regulatory disallowances of significant parts of EEI dues across the country, EEI has decided on its own to stop issuing detailed information on its budget that had previously been published for decades under the auspices of NARUC.”

TURN then presented the 2005 audited schedule of expenses defined by NARUC and argued that legislative and regulatory advocacy, advertising, marketing, and public relations be expensed to shareholders. The Commission agreed with TURN, preventing utility ratepayers from paying $300,000 of EEI dues.

TURN went a step further and proposed that EEI dues be completely disallowed from Southern California Edison’s (SCE) 2015 general rate case. SCE proposed to charge ratepayers for $1.463 million for EEI dues (the total EEI invoice to SCE was $1.922 million). The utility pushed back and even EEI provided comments. The trade associate acknowledged that NARUC no longer requires it to provide detailed information, and said it still uses the NARUC definitions to compute the percentage of member dues used for lobbying, public relations, advertising, and marketing.

But despite SCE’s rebuttal, plus the fact that EEI defended its spending — while admitting it no longer provides detailed information to NARUC — the Administrative Law Judge agreed with TURN and stated that “SCE has not shown it has removed all political or lobbying costs from its forecast.” However, the judge declined to disallow all of SCE’s EEI dues outright, instead adopting TURN’s methodology from the PG&E 2014 general rate case and reducing SCE’s forecast of EEI dues to $1 million from the total $1.922, a disallowance of 47.9%, which the Commission upheld in their vote.

EEI is also not the only political organization that receives money from utility ratepayers.

The report highlights examples of utilities proposing to include the American Gas Association, Nuclear Energy Institute, and the U.S. Chamber of Commerce, for example, in rate requests so that ratepayers pay for the utility’s annual membership fees. Dominion and Duke Energy attempted to have ratepayers subsidize a portion of American Legislative Exchange Council dues and political party organizations in rate requests. 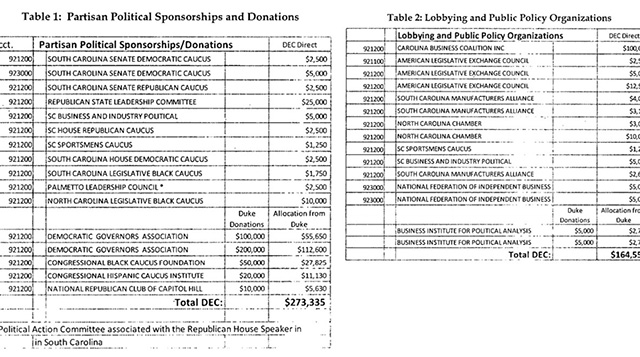 Many utility customers are also paying for the activities of law firms hired by the industry to litigate environmental laws. The firms represent the “U Groups” — Utility Air Regulatory Group; Utility Water Act Group; Utility Solid Waste and Activities Group. 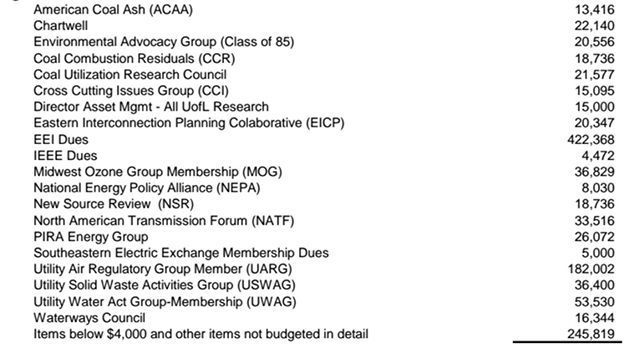 The Arizona Residential Utility Consumer Office said in Arizona Public Service’s recent rate case, “These groups [EEI, UARG, USWAG] represent the interest of electric generators … donations and membership is purely voluntary, many of which are political in nature, and may not be necessary for the provision of utility services.”

The new Energy and Policy Institute report has several recommendations, but the most important is that public utility commissioners and their staff place the burden of proof on utilities to demonstrate the exact percentage of customer money provided to industry groups and other political organizations, including EEI, that benefits their ratepayers. This is not a recommendation for commissioners to indiscriminately disallow all EEI dues, as certain EEI programs such as storm response preparedness may indeed be apolitical and provide a benefit to ratepayers. However, utilities should have to disclose the exact benefits that their political industry associations confer to ratepayers for each of their activities in detail; it is insufficient for utilities to file an annual invoice from an organization that notes the lobbying percentage, defined narrowly for tax purposes, as the only guidance for commissions to determine what should be charged to ratepayers.

Matt Kasper is a Fellow at the Energy & Policy Institute. He was previously a research assistant for the Energy and Environment Policy Team at the Center for American Progress, where he worked on state and local policy issues and was a guest contributor for ThinkProgress. Matt was also a fellow for Organizing for America in Indiana, and he spent time interning in Hartford, Connecticut, for the state legislature.