San Francisco, California, November 6, 2009 – The first of what may be many strikes hit San Francisco’s Class A hotels when workers launched a 3-day strike against the Grand Hyatt Union Square, one of the city’s largest and most luxurious. The contract with the workers’ union, Unite Here Local 2, expired on August 14. Since then, Local 2 has been trying to bargain a new agreement in the middle of an economic depression, in which hotels complain of reduced revenues. 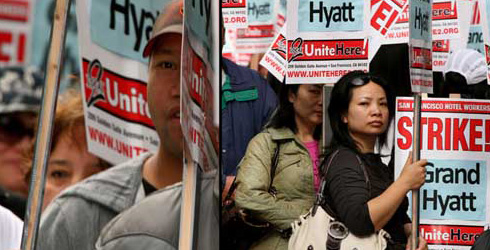 The luxury hotel chains demand changes in eligibility for the health care plan that would eliminate coverage for many or place it economically out of reach. Hotels want them to pay $35 per month this year, $115 per month next year, and $200 per month the year after.

Aurolyn Rush, a PBX operator at the Hyatt, says, “With what we make, we can’t afford that. Many of us would have to go without healthcare entirely.”

A typical San Francisco hotel worker earns $30,000 per year, and many can’t work a full 40-hour week. The union has offered a one-year agreement that would increase costs by only 1.5 percent, but the hotels have responded that they want that low-cost structure to continue for several years more, in which their revenues and profits would rise as the depression ends. In fact, under the hotel proposal, worker payments for healthcare would increase substantially during a period in which hotel profits rebound. 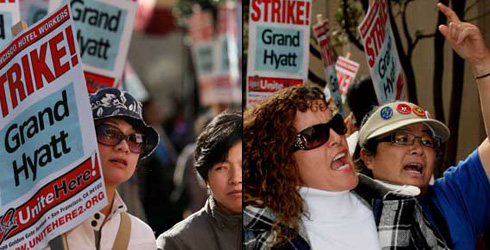 The Hyatt was chosen as the first hotel to be struck because its owners, the Prtizker family, made an initial public offering of 38 million shares of stock today, as a result of which the family expects to receive as much as $900 million. Penny Pritzker was treasurer for the election campaign of President Barack Obama. 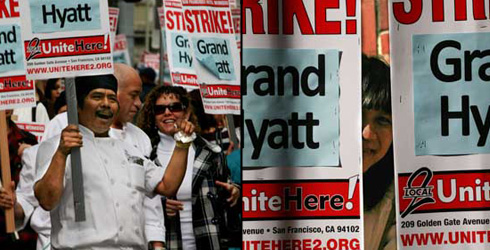 While the chain declared a loss of $36 million in the first two quarters of this year, it made between $168 million and $336 million in each of the previous five years. In addition, Hyatt shocked hotel workers nationwide in August when it fired all its housekeepers at its three Boston hotels, replacing them with workers from an outside contractor earning half their wages. The Hyatt strike lasted for three days, after which workers returned to work. Hyatt CEO Mark Hoplamazian was paid $6.7 million in 2008. The average San Francisco hotel worker earns about $30,000 per year. 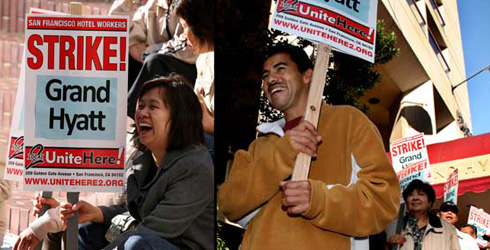 For more articles and images about hotel workers, see:

See also the photo documentary on indigenous migration to the US, “Communities Without Borders” (Cornell University/ILR Press, 2006).

See also “The Children of NAFTA, Labor Wars on the U.S./Mexico Border” (University of California, 2004).