There is a pervasive myth generated by conservatives that the private sector is more efficient and less bureaucratic than government. This is perpetuated by those seeking to continue the “free market” in US health care, which simultaneously exploits public programs through privatization of Medicare and Medicaid. Missing from the dialogue is the well-documented growing extreme bureaucracy in private health care, especially within the private health insurance industry and other corporate stakeholders in the medical-industrial complex. As one example, Figure 1 shows the exponential growth of administrators over the last 40-plus years compared to the numbers of physicians. (1) 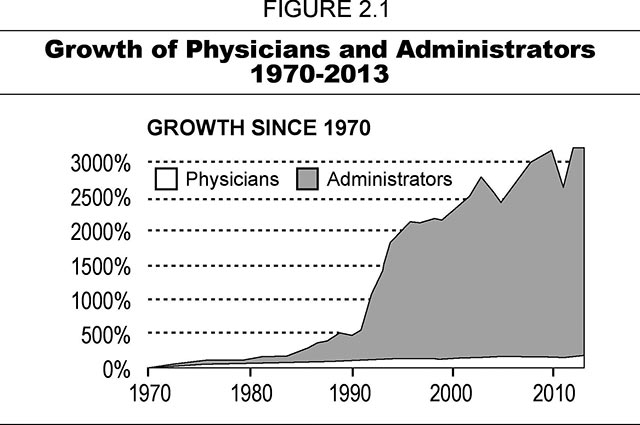 (Credit: Figure from How Obamacare Is Unsustainable)

Here are some markers of how this bureaucracy is out of control, and largely on the private side:

• The growth of managed care in the 1980s and 1990s brought on new administrative bureaucracies involved in setting limits on referrals and hospitalizations, under-treatment and denial of services, false advertising, disenrollment of sick enrollees, hiding performance data, and gag rules on physicians.

• While the insurance market declined by one percent between 2000 and 2005, its workforce grew by one-third. (2)

• As a model for the ACA, the 2006 Romney health care plan in Massachusetts led to an 18.4 percent increase in administrative jobs in its first three years, compared to a national average of 8 percent. (3)

This long trend of increasing bureaucracy has been accelerated since passage of the Affordable Care Act (ACA) in 2010. It is such a complex bill that this could have been predicted. Here are more examples of the growing problem:

• Operation of the ACA’s exchanges involves immense administrative challenges in determining eligibility for qualified health plans and subsidies/tax credits, and verifying annual household income and family size, both subject to change from year to year. (4)

• Administration of the expanded Medicaid program takes up 22.5 percent of the federal government’s total expenditures for theprogram, more than 11 times the administrative overhead of traditional Medicare. (5)

• Hospital administrative cost in the U. S. are far greater than in eight other countries—25.3 percent of total hospital expenditures compared to about 12 percent in Scotland and Canada, both single-payer countries. (6)

• U. S. physicians spend large amounts of time in dealing with differences in drug formularies and seeking prior authorization for planned tests or consultations.

Since much of the bureaucracy on the private side is involved in billing and payments for health care services, it has been an attractive target forhealth care fraud, in both cases contributing to continued growth of health care costs. Malcolm Sparrow, professor of the practice of public management at Harvard’s John F. Kennedy School of Government and author of the classic 2000 book, License to Steal: How Fraud Bleeds America’s Health Care System, has identified these five ways that our health care system makes fraud an attractive business for criminals: (1) fee-for-service reimbursement; (2) private sector involvement; (3) highly automated claims-processing systems; (4) processing accuracy emphasized over verification; and (5) post-payment audits focus on medical appropriateness, not truthfulness. (7)

The increasing use of electronic health records (EHRs), though beneficial in many ways, has led to increasing prevalence of fraud, which is now estimated to account for 10 percent of all health care costs. (8) Since the federal government established its Health Care Fraud and Abuse Control (HCFAC) Program in 2009, it has recovered more than $15 billion in cases involving fraud, but far less than the estimated $270 billion in losses tohealth care fraud each year. (9) These are some of the ways that health care fraud continues today, despite these efforts:

• Many insurers manipulate a provision of the ACA that allows them to get higher payments for enrollees deemed to be sicker than average. (10)

• More than two dozen Medicare Advantage plans have been found to be conducting in-home patient examinations that overstate how much the plans should be paid. (11)

• A recent study found that 50 hospitals, almost all for-profit, with the highest charge-to-cost ratios marked up their costs by ten-fold. (12)

As Ralph Nader has said:

All in all, the health care industry is replete with rackets that neither honest practitioners nor regulators find worrisome enough to effectively challenge. The perverse economic incentives in the industry range from third party payments to third party procedures. Add paid-off members of Congress who starve enforcement budgets and the enormous profits that come from that tired triad “waste, fraud and abuse” and you have a massive problem needing a massive solution. (14)

Fortunately, there is a solution for most of these problems—single-payer national health insurance (NHI). As we will show in future blogs, it can achieve a high level of administrative simplicity, operate with much lower overhead than we have today, and shift incentives from the current business model toward a service ethic in a much more accountable system, while providing universal access to affordable health care for our entire population.

Share
Copyright, Truthout. May not be reprinted without permission.
John Geyman