Is capitalism’s collapse inevitable? If so, what kind of post-capitalist society do we face? In Four Futures: Life After Capitalism, Peter Frase draws on social science, speculative fiction and social theory to create an engaging and thought-provoking portrait of four possible scenarios, some more dystopian than others. Order your copy of this book today from Truthout by clicking here!

As we automate more jobs and continue on a road to scarcity of resources, whither capitalism? The following is the Truthout interview with Peter Frase, author of Four Futures.

Peter Frase: One of the distinctive peculiarities of capitalism is the way it inverts the logic of scarcity and abundance. That is, it tries to impose scarcity where none need exist, while at the same time treating truly scarce things as though they are actually unlimited.

Artificial scarcities are imposed wherever landlords are allowed to charge exorbitant rents, where drug companies charge enormous rates for drugs that cost virtually nothing to produce, where people are sued for thousands of dollars for downloading a few music files, and so on. Yet when it comes to our ecosystems, businesses will, wherever possible, extract resources with no regard to their potential exhaustion, and dump their waste into our air and water.

People are increasingly recognizing the limits of that strategy, as can be seen in everything from the depletion of ocean fish populations to lack of access to fresh water to the accelerating impact of climate change due to atmospheric carbon dioxide emissions. However, the fact that we are running up against these material limits does not necessarily mean that the ruling elite is doomed. The question is a bit more complex: will they find a way to impose the costs of ecological degradation on poor and working people, or will we force them to pay the costs?

Can you next explain the impact of automation — a very important theme in your book — on present and future economic systems, and why automation is intractable?

The biggest problem with a lot of contemporary debates about automation is that people speak as though the phenomenon is new. But this is a central problematic of industrial capitalism, going back a couple of centuries. Once upon a time, almost everyone worked in agriculture; now that employs only a tiny fraction of people in rich countries. Then manufacturing became a main source of employment, before that too diminished due to automation (and also due to outsourcing, but to a much lesser degree than many people think). Now we see service sector and professional jobs being subject to the same basic force, which is the capitalist drive to economize on labor: to do more with less workers in order to increase profits. 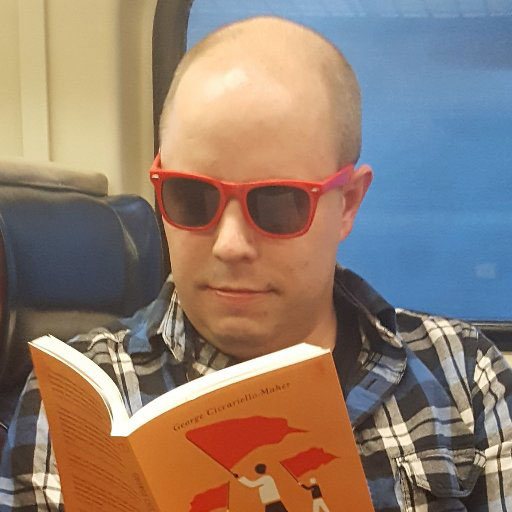 Peter Frase. (Photo: Verso Books)I’m not going to say it’s impossible that we might turn the wheel one more time, and shift everyone into some new kind of employment, rather than simply eliminating the need for labor. But I’m more interested in what’s possible in a world where we do have a drastically reduced need for work.

Because another problem is that people speak as though there’s no human agency here; that the robots just come for our jobs, and there’s nothing we can do about it. But for as long as the capitalist drive to automate has existed, there has been a counter-movement from the side of labor: the demand that the benefits of increased productivity should accrue to the working masses, not to the tiny elite of owners. This drives demands for shorter hours, higher wages, and even such things as a Universal Basic Income, guaranteeing everyone a basic standard of living irrespective of work.

Let’s make this an exercise in distillation. What are each of the four possible future economic options in the most basic terms of the two “specters” haunting the earth beginning with, as you do, communism?

The four futures emerge from a two-by-two diagram, which I generate from the interaction of two different dichotomies. These are ways of thinking about how our social systems might be transformed if, as I just suggested, most human labor can be automated.

One question is the ecological question we started out with: what do we do about the damage that capitalism has done to our ecosystems? Maybe we can find a way to move to renewable energy, use materials more efficiently, even mitigate and reverse the effects of climate change. Then we can live in a world of abundance, where automation allows us to live comfortable lives liberated from the need to work. This is the world of Star Trek, where people can simply walk up to a device called a replicator, and ask it to instantly materialize whatever material thing they need.

I call this future communism not in the sense of the 20th century Communist regimes, but in the sense Karl Marx talked about: a society characterized by the principle “from each according to her ability, to each according to his need.” In other words, your basic material needs are provided for, and you are free to explore and develop your talents and abilities in a truly free way, to take up whatever projects you find most fulfilling. In the context of today’s world, you can think of things like Wikipedia, where people are writing encyclopedia entries not because anyone is paying them, but just because that’s what they want to do.

Now let’s move to rentism — and can you define that in your own terms first?

The scenario I described above presupposes not just automation and a resolution of the ecological crisis, but also a fundamental change in our class structures and property relations. That is, all the material abundance we have available to us must become the common property of humanity, rather than the private property of the owning class, the 0.1% that controls most of the economy today.

I sketch out a world of “rentism” as a way of laying out my differences with those futurists who suggest that technological changes automatically lead to a world of leisure. The ruling class has ways of preserving its power. In a time when more and more of the economy is made up of immaterial patterns, and things that can be freely copied over the internet, this increasingly takes the form of rent extraction enforced by intellectual property laws.

When we think of “rent,” traditionally we speak about things like land and housing. But the term applies more generally to situations where it’s possible to make money not by making things, but simply by owning them and charging for access. A landlord can charge whatever the market will bear; in the same way, the patent-holder for a life-saving medicine can charge any price they want, irrespective of the actual cost of producing it, because they are the only one allowed to make it. The chapter on rentism explores what life could be like in a society that is dominated by this particular property form.

Next is socialism, which means so many different government-economic structures to different people. How is socialism defined in your mind and how would you make us arrive at that economic state?

I gave above my definition of communism, which could also be considered a kind of anarchist utopia where the state doesn’t need to manage labor and resources, because the machines have replaced labor and there are plenty of resources to go around. Whereas socialism, traditionally, has been seen to be about economic planning, particularly government planning of the economy.

My chapter on socialism is also about an egalitarian, post-class society. And it returns to the idea of planning, but with a different spin. Unlike most 20th century theorists of planning, I’m not so concerned with questions like “Who does what job?” or “How many of each type of widget should be produced?” Because I’m starting with the premise that it might be possible to basically automate that problem away.

But we still must return to the ecological axis. If we take a more sober view of environmental limits than in the discussion of communism, we come to the question of how we plan, not for production, but for consumption. That is, it might be that we all have magical machines that can make anything we need at the press of a button. But perhaps it’s not environmentally sustainable for anyone to simply make as much stuff as they like. So we need a process to ensure that nobody is taking more than their fair share.

That issue motivates a discussion of planning, which in turn leads to the question of democracy. How will we, collectively, decide on the most just and equitable way of providing everyone with the best life possible given our ecological constraints?

Now comes the grimmest and most unimaginable alternative, exterminism? Can you explain how we would arrive at the “exterminism endgame”?

Although I’d like to think it’s the most unimaginable, many of my readers seem to find it the most plausible!

The relationship between bosses and workers in capitalism has historically been characterized by a relationship of both conflict and mutual interdependence. That is, bosses need workers to run their shops and factories, while workers need bosses because they have no control of the means of production, no other way to make a living. And they then struggle over who gets what share of the social product.

Is capitalism’s collapse inevitable? If so, what kind of post-capitalist society do we face?

But what happens when you break this interdependence — when the bosses don’t need workers because they have robots? One option is the rent-based society mentioned above. But that only works if there can be arbitrarily large amounts of stuff, with the capitalists simply acting as gatekeepers and charging for access. But what if there just fundamentally isn’t enough stuff, due to the rapid degradation of the environment? What if providing a decent life to the masses would mean lower standards of living for the elites?

The logical endgame, in that case, is that the rich wall themselves off, protect themselves with their drones and surveillance systems, and leave the rest of us to rot. That’s the world of a few gated communities and private islands, with everyone else left in slums, prisons, or refugee camps. It’s a world where the people who have been rendered superfluous as workers are left to die — if not through an overt campaign of genocide, then merely by malign neglect, as resource wars, climate change-driven disasters and untreated disease epidemics take their toll.

That last scenario is obviously the most dystopian, and many people tend to gravitate to it in a despairing way, particularly in the current political moment. But the larger point of my book is that none of the futures is our destiny. Actually, all of them, in some ways, are already here. The question is what we will do, together, to get more of the futures we want and less of the futures we don’t.