“Protect the water!” a young girl chanted. “Protect it!” her classmates answered.

The children were encouraged to raise a ruckus last week as gray clouds hung low and the last brittle, rust-colored leaves blew off trees in Michigan’s far north. They were joined by other adult members of the Sault (pronounced “Soo”) Ste. Marie Tribe of Chippewa Indians, various First Nation communities in nearby Canada, the Bay Mills Indian Community and other locals in protest of a pipeline that’s been sending oil through the region since shortly after World War II.

Line 5, a 645-mile pipeline owned by Enbridge, carries oil and propane from Superior, Wisc., through Michigan’s Upper Peninsula down into the Lower Peninsula and eventually into Sarnia, Canada. 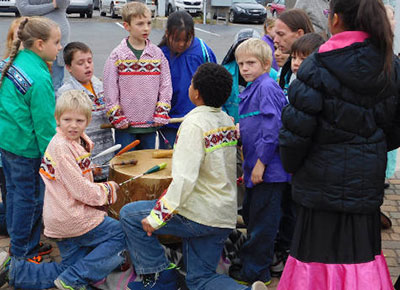 (Photo: Environmental Health News)It runs beneath the Straits of Mackinac, the waters separating Michigan’s Upper and Lower peninsulas about 45 minutes south of Sault Ste. Marie down Interstate I-75. These are precious waters to Michiganders, the meeting place of lakes Michigan and Huron. Might Mac (the Mackinac Bridge) spans the five miles over the Straits offering vistas of Mackinac Island, passing ships and miles upon miles of freshwater.

The pipes — Line 5 splits into two 20-inch diameter pipes as it crosses the Straits — are more than six decades old and located in an abundant fishery and area crucial for drinking water. The Great Lakes hold 20 percent of the world’s surface freshwater. Safety protocol and inspections remain nebulous at best, stoking concern, frustration and anxiety among those on the left and right side of the political spectrum throughout the state.

“This is risking one of the planet’s greatest resources,” said Liz Kirkwood, executive director of FLOW (For Love of Water), a nonprofit dedicated to protecting the Great Lakes, in a phone interview.

“To exercise a treaty right to fish, there have to be fish in the waters,” said Aaron Payment, chairperson of the Sault Tribe of Chippewa Indians, to the crowd of about 50. “Our fishery is threatened.”

The small Michigan gathering in a parking lot between an auto parts store and tattoo parlor was far from North Dakota and the Standing Rock Sioux’s continued fight over the proposed Dakota Access pipeline. But the power of what’s happening out on the plains has emboldened tribes across the country to resist the stomping on treaty rights and preying upon natural resources.

“These are our resources, they don’t belong to Michigan or Enbridge,” said Phil Bellfy, a retired Michigan State University professor and member of the White Earth Band of Minnesota Chippewa.

Songs and Reminders of Past Spills

The Healing Lodge Sisters of Ontario — four women from First Nations tribes in Canada — sang traditional songs before speakers launched into pipeline talk. Eyes closed, with a steady beat tapped out on individual hand drums, they sang softly through their song, “A message to save the land.”

“We are taking land for granted and we have almost used her up,” they sang as cars passed, honking in response to the protest. The song came to one of the Sisters in a dream. 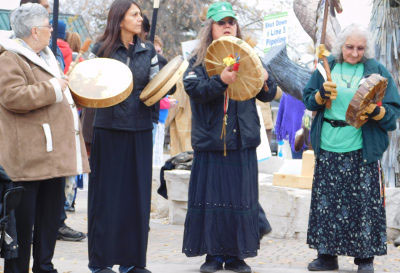 Healing Lodge Sisters of Ontario. (Photo: Environmental Health News)The lyrics were fitting — people here know Enbridge and the destruction they’ve caused to the land. The company spilled more than a million gallons of heavy crude oil in the Kalamazoo River in 2010. The spill, which occurred downstate near Marshall, Mich., was the largest inland oil spill in U.S. history. While a settlement was reached this summer — totaling $177 million — cleanup continues.

Line 5 carries almost 23 million gallons of oil per day across the Straits. A University of Michigan Water Center study estimated that more than 700 miles of Great Lakes shoreline would be at risk if there were a Straits’ spill.

“The Straits are such valuable waters, and delicate ecosystems, that we know that no one would be allowed to place such a pipeline there today,” Payment said. “The pipeline is an accident waiting to happen.”

Kirkwood said Line 5 is not just risky, but illegal. FLOW this past summer alleged eight Line 5 violations of state easement and law, including Enbridge concealing information about cracks and rusts on the pipes, pipelines not being thick enough, and failing to have adequate insurance.

This summer the state found that Enbridge had four sections of pipeline without proper supports, which, according to the easement, means areas greater than 75 feet without support. Attorney General Bill Schuette wrote a letter to Enbridge saying there weren’t enough ground supports per the 1953 easement between the state and company.

Ryan Duffy, an Enbridge spokesperson, said in an emailed response that the company finished installing the four new anchor supports earlier this month.

“We are planning on adding an additional 18 supports proactively as soon as we receive permitting from the State,” he added, saying the need for new anchors reflects the dynamic currents of the Straits.

These currents add to opponents’ concern, as they say it could complicate oil cleanup. “The first 12 hours are the most critical to save lakes in a spill,” said Vince Lumetta, a pipeline opponent and retired engineer from Cheboygan, Michigan, to the crowd in Sault Ste. Marie. “These lakes are never at rest, the currents are always changing.”

Two to three months of ice coverage is common to the lakes in a normal winter, which would render cleanup almost impossible, Lumetta added.

Duffy said they can shut off flow to the pipeline in 2 to 3 minutes and that they’re prepared for any winter spills with equipment such as ice augers and drills, remote operated vehicles, and “Arctic boom,” which are floating barriers designed for sub-zero spills.

But fears remain given Enbridge’s track record and recent water troubles in Michigan.

Champ Syrette, a member of the Batchewana First Nation of Ojibways located across the St. Mary’s River in Canada, said Line 5 is a symptom of a larger problem of losing touch with water. He pointed to the Flint water crisis as further evidence that Michigan officials aren’t respecting the need for healthy water for all.

“The Creator gave us rivers, lakes to drink from,” he said. “We’re out buying water nowadays.”

Two days after the rally Payment is in his office in downtown Sault Ste. Marie. The office sits on the second floor of the tribe’s administration building and is adorned with plants, pictures, treaties and a large quilt with a colorful turtle outline.

Payment points to a picture of an unsmiling, gruff face on the wall. “That’s Big Abe,” he said.

Payment, whose father was a commercial fisherman, said Line 5 is a direct threat to the fishing rights of tribes throughout the state of Michigan. These are ceded waters, areas that the tribe handed over with the idea that they would retain the right to all traditional uses.

This has been a flashpoint from Sault Ste. Marie to Standing Rock to the Bears Ears National Monument fight: protecting areas that aren’t on tribal land but on ceded or sacred areas. Development, whether a pipeline in North Dakota or an open pit mine near the Wisconsin border with Michigan, alters the landscape and potentially sullies water, air and land that is still used by Native Americans for fishing, hunting, drinking or simply offering respect.

The Sault Ste. Marie Tribe of Chippewa Indians, along with the Grand Traverse Band of Ottawa and Chippewa Indians, this summer joined the National Wildlife Federation lawsuit claiming that the Pipeline and Hazardous Materials Safety Agency failed to fully assess environmental and potential endangered species’ impacts from Line 5 when they approved Enbridge’s emergency spill plans in 2013.

The tribes say that not only should the resources be protected to honor treaty obligations but the tribes should have been consulted.

Payment and other tribal leaders through the National Congress of American Indians are also pushing President Obama to pass an executive order requiring tribal consultation on any development on tribal land, ceded territory, or that could impact treaty rights.

While such an extension of tribal consult wouldn’t undo potential harm from existing infrastructure like Line 5, it would prevent the continued chipping away of Native treaty rights, Payment said.

Before Donald Trump takes over, and with the continuing Standing Rock protests, Payment said it’s the perfect time for President Obama to further bolster an already Native-friendly legacy.

Standing Rock “is one of the biggest mobilizing events since Wounded Knee,” he said. “Tribes are on the international stage on this issue right now.”

From Superior to Standing Rock

Wayne Carrick went to Standing Rock twice and spoke to the Sault Ste. Marie protesters about how things are changing in the Dakotas. “The first time I went it was like how we used to live 150 years ago, if you had nothing and went to these camps, they take care of you,” said Carrick, a member of the Bay Mills Indian Community, which is located a half hour west of Sault Ste. Marie on the shores of Lake Superior.

“People are going there having faith the Creator will take care of them, and it’s working,” said Carrick, holding a pair of crumbled sheets of loose-leaf paper for notes, pacing in circles.

That community-feel persists but the atmosphere changed on his second visit, he said. Hundreds of police rolling through camps. Clashes and fights with cops. Choppers. Airplanes. Drones. “At night they fly with no lights on,” he said, adding that he sent his children home because he didn’t want them to see their people get “beat down like that.”

Regional indigenous leaders say younger tribal members like Carrick seem to grasp the need to cling to their culture in the face of environmental insults. “It’s good to see the young ones drumming,” Syrette said of the Bahweting performers. “Back in our day it was few and far between … people were picking up and leaving those teachings.”

Opposition to Line 5 is swelling. During the election “No Oil in the Straits” signs were staked in the ground at both Trump and Clinton supporting homes through the Upper Peninsula.

Line 5 is “a bi-partisan issue,” Kirkwood says. “Our common love is of the Great Lakes.” More than 200 Michigan businesses have pledged support for Line 5 shutdown, in addition to 22 cities, 14 counties and 24 townships.

“It’s a critical juncture for the environmental movement, the Indigenous movement,” she said, referring to our energy future. “As a nation we’re at crossroads, what do we value and who do we want be?”

Despite what seems an oil-friendly president-elect and constant threats to treaty rights, tribes will persist, Payment said.

“We survived Andrew Jackson. We’ll survive anything that comes at us.”