As the ongoing occupation of Wall Street by hundreds of protesters enters its third week — and as protests spread to other cities such as Boston and Los Angeles — demonstrators have endorsed a new slogan: “We are the 99 percent.” This slogan refers an economic struggle between 99 percent of Americans and the richest one percent of Americans, who are increasingly accumulating a greater share of the national wealth to the detriment of the middle class.

It may shock you exactly how wealthy this top 1 percent of Americans is. ThinkProgress has assembled five facts about this class of super-rich Americans:

1. The Top 1 Percent Of Americans Owns 40 Percent Of The Nation’s Wealth: As Nobel Laureate Joseph Stiglitz points out, the richest 1 percent of Americans now own 40 percent of the nation’s wealth. Sociologist William Domhoff illustrates this wealth disparity using 2007 figures where the top 1 percent owned 42 percent of the country’s financial wealth (total net worth minus the value of one’s home). How much does the bottom 80 percent own? Only 7 percent: 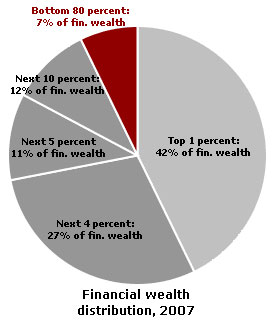 As Stiglitz notes, this disparity is much worse than it was in the past, as just 25 years ago the top 1 percent owned 33 percent of national wealth.

2. The Top 1 Percent Of Americans Take Home 24 Percent Of National Income: While the richest 1 percent of Americans take home almost a quarter of national income today, in 1976 they took home just 9 percent — meaning their share of the national income pool has nearly tripled in roughly three decades.

3. The Top 1 Percent Of Americans Own Half Of The Country’s Stocks, Bonds, And Mutual Funds: The Institute for Policy Studies illustrates this massive disparity in financial investment ownership, noting that the bottom 50 percent of Americans own only .5 percent of these investments: 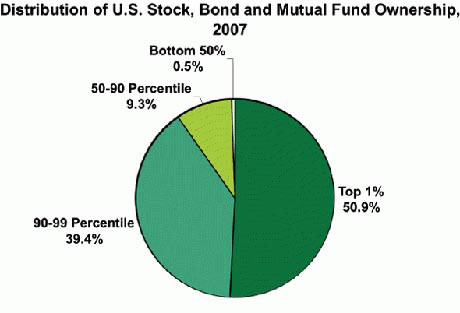 4. The Top 1 Percent Of Americans Have Only 5 Percent Of The Nation’s Personal Debt: 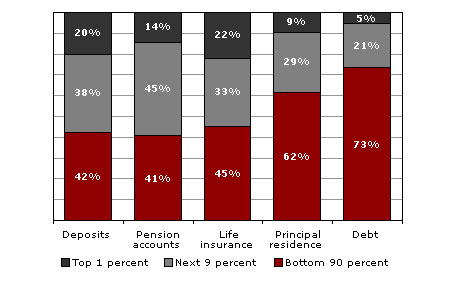 5. The Top 1 Percent Are Taking In More Of The Nation’s Income Than At Any Other Time Since The 1920s: Not only are the wealthiest 1 percent of Americans taking home a tremendous portion of the national income, but their share of this income is greater than at any other time since the Great Depression, as the Center for Budget and Policy Priorities illustrates in this chart using 2007 data: 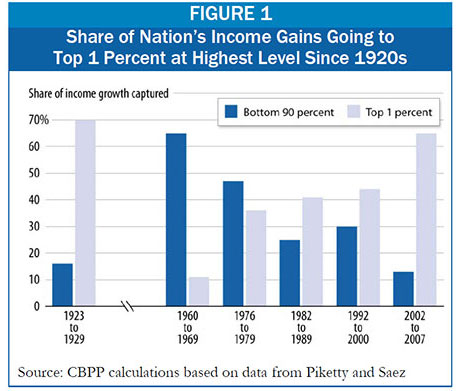 As Professor Elizabeth Warren has explained, “there is nobody in this country who got rich on his own. Nobody…Part of the underlying social contract is you take a hunk of that and pay forward for the next kid who comes along.” More and more often, that is not occurring, giving the protesters ample reason to take to the streets.