The short-lived Paris Commune of 1871 lasted only a little more than two months before being ruthlessly crushed. A new book by Yale Professor John Merriman, “Massacre: The Life and Death of the Paris Commune,” provides a remarkably detailed account of an armed uprising that rejected oligarchical government. Click here to get the book by contributing to Truthout!

Mark Karlin: Before we discuss the 74-day duration of the Paris commune, can you provide some historical context about the tumultuous period between the French Revolution that began in 1789 and the years leading to the Franco-Prussian War that preceded the formation of the commune. I think many Truthout readers may be unaware that although there was a French Revolution against the monarchy, it was followed by years of upheaval that shifted between Bonapartism, forces to restore the empire, Republicanism, workers’ revolts, and other factions.

John Merriman: The role of “revolution” in the collective memory of people in France and particularly Parisians remained prominent throughout the 19th century. The Bourbon monarchy, restored in 1814 and again in 1815 with the final defeat of Napoleon, fell to revolution in July 1830. The moderate Orleanist monarchy disappeared in 1848 with the February Revolution, followed by a failed workers’ insurrection that same June – the “June Days.” Louis Napoleon Bonaparte, nephew of Napoleon (and the “hat without the head” as one wag put it), gradually undermined and then destroyed the Second French Republic with the coup d’état of December 2, 1851. Louis Napoleon Bonaparte made himself Napoleon III, ruling over the Second Empire. It was during that period that Baron Georges Haussmann’s grands boulevards ploughed through and around many traditionally revolutionary Parisian neighborhoods.

That brings us up to the immediate antecedent to, and in large part opportune catalyst for, the Paris Commune of 1871. Can you talk briefly about the French defeat in the Franco-Prussian War and the vacuum that opened for a Paris revolt against the conservative provisional government located tellingly in Versailles?

In July 1870, Napoleon III bumbled into a war with Prussia and its allies among other German states, and that regime, too, fell, and ordinary Parisians declared a republic on September 4, 1870. Prussia armies besieged Paris from early September into late January 1871, when the provisional government capitulated – against the wishes of many Parisians – and France confronted the loss of Alsace and much of Lorraine and were to pay a huge indemnity to newly unified Germany. What kind of regime would follow? Hastily organized elections for a new National Assembly returned a majority of monarchists, thus confronting Parisians with the possibility that either the Bourbon or Orleanist pretender might be on the throne. Contributing to such fears was the decision of the provisional government and the National Assembly to meet in Versailles, which had been the residence of the traditional Bourbon monarchy, in the château de Versailles, which in the Ancien Régime had been the equivalent of a noble and royalist theme park!

Let’s set the scene for the uprising of the commune in mid-March of 1871. The main force of the Army of Versailles is located about 20 kilometers from Paris. Meanwhile the victorious Prussians are also occupying French territory north and east of Paris. At the same time, the commune’s primary armed force was the National Guard, largely divided along arrondissements (sections of Paris), without much strategic leadership. What were the first few weeks of the Commune uprising in Paris like in terms of establishing an “interim” Paris government?

Not long after the events of March 18, 1871, the new “commune” organized municipal elections for members of the administrative body of the commune, also called La Commune. But during the commune one found what Leon Trotsky would describe during the Russian Revolution as “dual sovereignty,” because the National Guard of Paris remained a second and sometimes competing authority. The “Commune” named “commissions” to oversee the administration of Paris. Given the chaos of the moment, it is amazing how orderly was the subsequent administration of the great city, even as the shells of the army of Versailles fell nearer.

Who were the Communards – and the book provides remarkable detail on many of the leaders – in terms of their demographics? What were their goals? How did the upper class in Paris who remained in the city react to being under the rule of those opposed to an oligarchy?

The Communards were for the most part ordinary Parisians, men and women, drawn from the world of work, particularly living in quartiers populaires, essentially working-class neighborhoods, above all in northern and northeastern Paris. Many were people simply caught up in besieged Paris, whereas at least 200,000 more well-off Parisians had been able to get out of the city – one had to have somewhere to go – during the first siege, or during the commune. To be sure, there were many middle-class Parisians who supported the commune. But there were also many who awaited what they would call their “liberation,” anti-Communards, some of who prepared to support the armies of Versailles.

Why did the Communards present such a threat to the powers ensconced in Versailles? After all, the provisional government came to a peaceful agreement with the Prussians, but they pulverized the Commune.

Many if not most ordinary Parisians – and a good many from the upper classes as well – wanted Paris to have political rights (such as having a mayor); and they feared that the newly elected (in February 1871) National Assembly and its provisional authority led by Adolphe Thiers might pull off the restoration of a monarchy or, at best, an extremely conservative republic with strong ties to the Catholic Church. Moreover, the commune built its strength among working people on the mobilization that had occurred during the last years of Napoleon III’s Second Empire, 1868-1870. They demanded economic and social reforms. 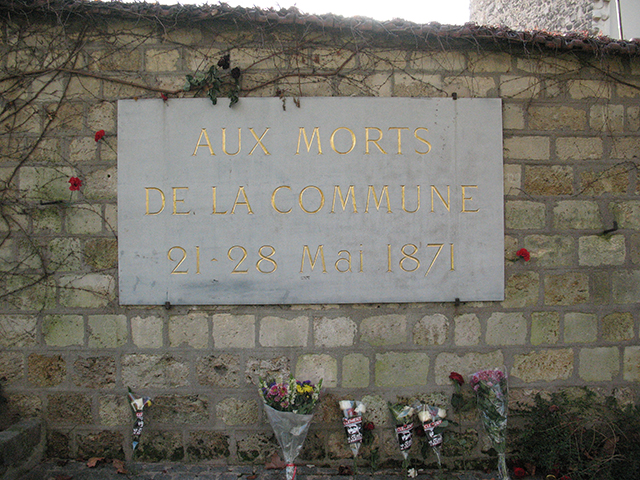 What are some of the progressive ideas that the commune promoted that later became incorporated in France and elsewhere?

Among others, 1) That Paris have the right to have an elected mayor. 2) The separation of church and state 3) Economic and social reforms, including those by female Communards (thus Communardes).

How did the resentment against the Catholic Church of France evidence itself during the commune, symbolized by the Communard execution of Archbishop Georges Darboy.

Early during the commune, the authority of the latter declared the separation of church and state. There had been considerable resentment against the political influence of the Catholic Church during the Second Empire, as before, and its support for that regime. The number of religious orders and their members had risen dramatically during the period 1852-1870 and their influence in primary education was dominant. Anti-clericalism was rampant during the commune, although some who were for the commune continued to go to Church, and although political clubs met in churches – the only spaces capable of welcoming many people – Masses continued to be said in many churches.

But the execution of Archbishop Georges Darboy and other hostages incarcerated during the commune had far more to do with the summary execution of captured Communards by the Versaillais forces during fighting beyond the ramparts of Paris. Moreover, the Commune hoped to organize an exchange of Darboy and perhaps others for an aged left-wing leader held by the provisional government. Darboy and five others were executed on May 24. The campaign for laicization and secularization was an important part of Communard plans, but the execution of the hostages related to the military situation and the policies of the Versaillais forces.

The working class and socialist women of Paris, including Louise Michel an indomitable figure you follow, played a significant leadership and fighting role in the commune. Of course, the wealthy aristocratic women stayed inside their homes in tony neighborhoods, awaiting the Army of Versailles. However, clearly the commune marked a breakthrough in an emancipated role for women, didn’t it?

Hard to make that case! French women did not gain the right to vote until after World War II (British women, by contrast, received suffrage after World War I). Parisian militant women were more concerned with economic and social reforms than achieving the right to vote – Louise Michel said this herself. She was sentenced to be sent to New Caladonia, and returned to France a good many years later. Having seen state terrorism up close, she became an anarchist, and later led the first May Day marches in France. The participation of women in the Paris Commune would remain in the collective memory of the French left.

It was an extraordinarily uneven conflict. The forces of Versailles, carefully rebuilt in April and well into May, numbered about 130,000 men. In the end, probably only about 10,000 or at best 20,000 men, women, and indeed children defended the Commune, whose National Guard forces increasingly fell back on their own plebeian neighborhoods, crouched behind barricades being battered by superior forces or being shot from above in adjacent houses the Versaillais had taken. In all, sixty-four hostages held by the Commune perished, some executed, others killed in the streets. Estimates of supporters of the Commune who were killed in fighting, summarily executed, or gunned down afterward ranged as high as 25,000 or more.

The Versaillais forces set the number at 17,000. An exact “body count” is not possible, as bodies were covered with lime, tossed into the river,, or were in burning buildings. The best estimate would be somewhere between 12,000 and 15,000. That’s lots of people, considerably more than the sixty-four hostages who perished at the hands of the Communards. I guess that’s why I called the book “Massacre.” One of my goals was to relate the lives – and deaths – of very ordinary people caught up in absolutely extraordinary, fascinating, and, ultimately deadly circumstances.

You are quoted as saying that the bloodbath of death visited upon the Communards by the Army of Versailles as “murderous, systematic, state repression that…helped unleash the demons of the twentieth century.” Can you expand upon that?

I guess the thing that first attracted me to the subject (and appalled me, the more I thought about it) was an infamous declaration by a military prosecutor in the wake of the Commune that “A Paris, tout le monde était coupable,” that is, “A Paris, everyone was guilty!” Thus ordinary people who were unable to get out (no connections in Versailles, no country house, no aunt in Angers or wherever), or who were attached to and willing to fight for the Commune until the end were left in Paris when the forces of Versailles entered the capital on May 21, 1871.

During the summary executions, people were killed for being whom they were, or after “trials” of 10 or 15 seconds before Court Martials at Parc Monceau, Châtelet, or the Jardins de Luxembourg, executed, because they had working-class accents from the plebeian neighborhoods of Paris (especially Montmartre, Belleville, Ménilmontant, Charonne, etc.), or because they were foreigners (particularly Poles, a good many of whom fought for the Commune), or because they had the rough hands of work, or because they called some Versaillais officer “tu,” the familiar form, or “citoyen,” – citizen. This reminded me sadly and anxiously about what would come later, larger-scale massacres of Armenians by the Turks in 1895 or 1915, or Jews (and others, Communists, Socialists) during World War II. You were guilty for being whom you were (“Forty-one Shots,” as Bruce sings). Voilà.