In the aftermath of the super committee’s collapse, Democrats are going to have to fight to get unemployment insurance benefits extended. This is one of many “orphan programs” left behind that are set to expire at the end of the year. Since it looks like there is going to be a debate over whether or not to extend the benefits, what can we say with certainty about the costs and benefits of extending unemployment benefits?

1. Even considering the cost, unemployment benefits are a deal. Extending unemployment benefits would cost around $44 billion for one year. (Source: CBO.) Specifically, “CBO estimates…$44.1 billion would stem from the one-year extension of EUC and EB provisions. That extension would allow people who exhaust their regular unemployment compensation during calendar year 2012 to receive up to 53 weeks of EUC, and would make it easier for states to provide up to an additional 20 weeks of benefits under EB (depending on the states’ laws and unemployment rates).” Given that interest rates are so low, and real interest rates are even negative, this is a great value.

2. Without an extension, GDP will decline. The loss of not having that $44 billion pumped into the economy would cause at least a 0.3 percent decline in GDP in 2012. (Source: JPMorgan Chase & Co. chief U.S. economist Michael Feroli.)

3. Given spending multipliers, this will have a ripple effect. Because of a government spending multipler, that 0.3 percent decline is more like 0.5 percent, with a subsequent, significant impact on jobs. (Source: EPI.)

Since we are in a liquidity trap, where monetary policy is made significantly more difficult by a zero lower bound, then there’s a multipler to government spending. Unemployment benefits in particular have a good bang-for-the-buck effect. Heidi Shierholz and Lawrence Mishel of EPI argued this with their chart:

4. This is about more than just GDP; it’s about keeping people afloat. The stakes go beyond economic aggregates. Unemployment insurance has kept 3.2 million people out of poverty in 2010.This includes nearly a million children. (Source: Census, h/t EPI.) 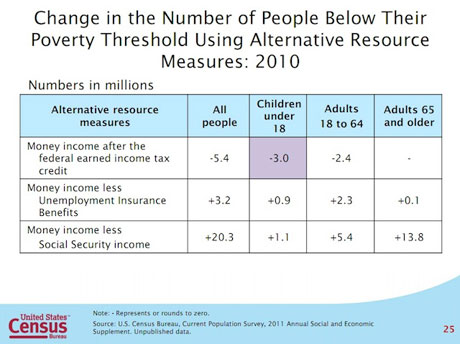 That’s a lot of jobs gained and a lot of misery avoided, with or without a multipler! But those jobs also increase demand. Won’t unemployment insurance decrease the supply of labor?

5. The potential increase in unemployment from extending benefits is small. Previous credible estimates of the effects of unemployment insurance in this recession have shown that they “increased the overall unemployment rate 0.4 to 0.8 percentage points,” a point where it is still a great tradeoff. (Source: Federal Reserve Bank of San Francisco.)

One way to estimate this is to take job losers, who are eligible for UI, and measure their duration against quits, who are not eligible for UI. The San Francisco Fed source above does this, and finds the following chart: 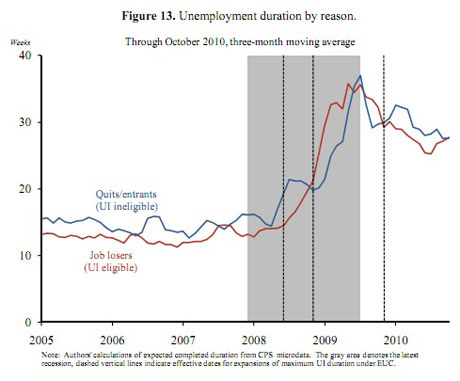 Even given these figures, I still think extending benefits is a fantastic idea. For more whether it is a great tradeoff, see this post from last year from WSJ’s Kelly Evans and my somewhat critical response.

6. And even those figures may be inflated. These results are found to be exaggerated by a better, more current study, which finds “UI bene?t extensions raised the unemployment rate by only about 0.2–0.6 percentage points.” (Source: Jesse Rothstein.) This study uses the conceptual method above but goes an extra step to break UI down by state, over time, and with individual characteristics.

Moreover, most studies that find a 2%+ increase in unemployment don’t use any of the control techniques mentioned above. (Example: Barro’s WSJ editorial.) Indeed, what they all essentially do is look backwards, to data and studies from the 1980s and 1990s, and project those numbers into our current Great Recession. As Rothstein mentions, these studies all “involve extrapolations from pre-recession estimates of the e?ect of UI durations or from pre-recession unemployment exit rates.” As a financial engineer, I respect taking data from inappropriate time periods and blindly projecting them forward without any type of diligence or attention paid to the underlying conditions. But this is not appropriate here, as we haven’t had a major crisis like this in the past 30 years.

7. Everyone is having a hard time finding a job. The overall labor market is weak, not just for the long-term unemployed. (Source: This post, from BLS data.) 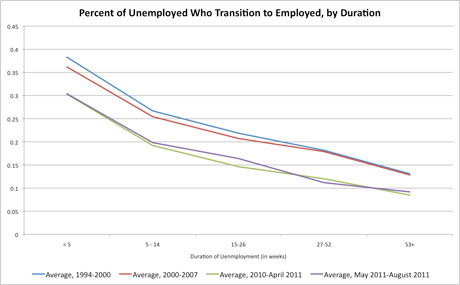 8. Other considerations make the case for extending benefits.

The biggest counterarguments against extending benefits are concerns about structural unemployment and decreased work effort. The worry about a permanent, “structural” increase from UI extensions is subject to the Lucas critique. As Scott Sumner noted, “the maximum length of unemployment insurance is itself an endogenous variable. If stimulus were to sharply boost aggregate demand it is quite likely that Congress would return the UI limit to 26 weeks, as it has during previous recoveries.”

Rothstein shows that at least half of this “increase” is the result of people staying in the labor force, which is a good thing, or at least a not bad and definitely not related to the major problems. As Heidi Shierholz notes, ”less than 0.2 percentage points of the 4.4 percentage point increase in the unemployment rate over the Great Recession was due to an extension-induced reduction in the rate at which workers get a new job, which is the disincentive effect policy makers are actually concerned about. Moreover, even that may be a good thing — a small UI-induced increase in the time it takes for an unemployed worker to get a new job is an asset of the UI program to the extent that it affords unemployed workers the needed space to find a new job that matches their skills and experience.”