The restaurant and retail sectors accounted for more than half of July’s job growth.

The Labor Department reported the economy added 162,000 jobs in July. Job growth for the prior two months was also revised down by 26,000, bringing the average growth over the last three months to 175,000. On the positive side, the household survey showed the unemployment rate falling to 7.4 percent, the lowest level since December of 2008. The employment-to-population ratio (EPOP) remained unchanged at 58.7 percent.

More disturbing than the slightly weaker-than-expected job growth number was its composition. Retail trade added 46,800 jobs and restaurants added 38,400, meaning that these two low-paying sectors accounted for more than half of all job growth in July. By comparison, they accounted for 46.8 percent of the job growth over the last three months and 32.2 percent of job growth over the last year. The rapid growth of jobs in these sectors is more likely an indication of the state of the labor market than the nature of job creation. Businesses in these sectors often want to hire people but can’t find workers. In a weak job market desperate workers will take even the lowest-paying jobs.

There were few notable areas of growth outside of these sectors. Professional and technical services added 21,100 jobs, almost exactly in line with its 20,000 average over the last year. Wholesale trade added 13,700 jobs, somewhat above its 7,000 average for the last year. Construction employment fell by 6,000. It has been virtually flat since February. Manufacturing added 6,000 jobs in July, but it has seen little net change since January. With the average work week falling by 0.3 hours in construction and 0.2 hours in manufacturing, there is little reason to expect any turnaround in these sectors any time soon.

Health care added just 2,500 jobs, the smallest gain in a decade. This brings the three-month average to just 8,800. Until the last few months job growth in the sector had been averaging over 20,000 a month. If this slowdown persists, that will be good news from the standpoint of containing costs but bad news in a seriously underemployed economy. The government sector gained 1,000 jobs, with a drop of 3,000 jobs in the Postal Service being offset by gains at the state and local level.

The average hourly wage fell in July, but this was after a big jump in June. It has increased at a 2.0 percent annual rate over the last three months. 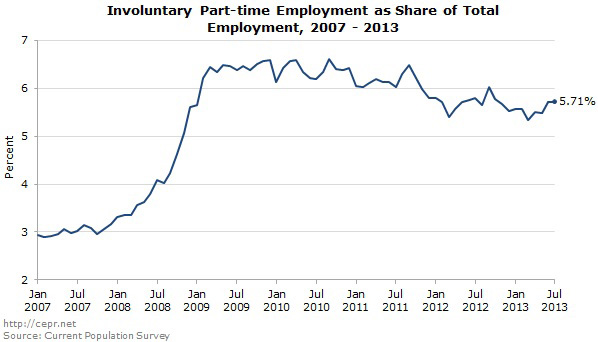 One disturbing item in the household data is a sharp drop in the number of people with disabilities who are working over the last year, with the data showing a decline of 8.0 percent from a peak in October of last year. This is coupled with a 1.1 percentage point year-over-year rise in the unemployment rate.

On the whole this report suggests a slowing economy. The drop in average hours pushed the index of total weekly down to its May level. This falloff in hours, coupled with weak growth in the temp sector, is not a good omen for future job growth.