President Obama's Council on Jobs and Competitiveness (“Jobs Council”) issued a report calling for fewer regulations and lower corporate tax rates. This doesn't have to be a bad idea.

The Jobs Council report, Road Map to Renewal makes a number of recommendations. Here are the main points – please click through for the details:

The Jobs Council is heavily, heavily, heavily weighted to tilt toward the 1%. The list of members reads “Chair and CEO” with a smattering of ultra-wealthy finance types thrown in, and then a couple of token union leaders.

I agree with the overall spirit and a number of the specific recommendations in today’s report … I absolutely agree … that the United States is falling behind our international counterparts in investing in modern infrastructure, education, and skills; supporting a vibrant manufacturing sector; developing cost-effective and globally responsible energy practices; and supporting innovation. …

Unfortunately, I believe the report downplays the need for a proactive role for the U.S. government in many of these areas; fails to address the significant additional revenues needed to address the challenges identified on an appropriate scale; and in many cases erroneously identifies the root causes of the underlying structural problems.

… the report addresses regulatory issues as if we were not in the midst of a prolonged economic crisis whose proximate causes clearly included inadequate regulation of business, and in particular financial markets and institutions.

With respect to corporate tax reform, I believe that corporations as a group pay too low a share of taxes to support the kind of infrastructure investment and education/skills upgrades that are so urgently needed at this time… The report places way too much emphasis on statutory tax rates, mentioning only as an aside that the effective rates paid by corporations are much lower, and that overall corporate tax revenues as a percent of GDP are the fourth lowest in the OECD.

Yes, We Can Cut Corporate Taxes … If

Actually, we can cut corporate taxes, increasing our international competitiveness, while We, the People still fund our democracy and get paid back for our investment that enabled the prosperity of the corporations. Here's how: Cut corporate taxes, but raise taxes on the 1%er owners of the corporations. Stop the nonsense of lower capital gains tax rates, and restore pre-Reagan top tax rates. Also, require corporations to either use their cash or pay it out to shareholders instead of just sitting on it as many do now.

Look at this chart, which tells you everything you need to know about the who what when where and why of corporations. Corporate wealth is also personal wealth. When you hear about corporations doing well, think about this chart: 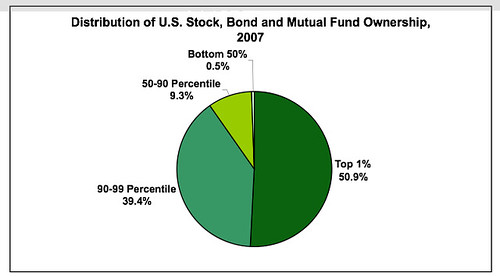 Here is what usually happens in DC. After Congress passes laws the regulatory bodies translate the laws into a regulatory framework. This is where the giant companies and their lobbyists get to work. The work they do is influencing these agencies to write regulations that help them, the 1%er corporations that can afford to swarm the agencies with lobbyists — and that obstruct their competition. So we end up with a situation where small businesses and startups don't have a chance making it through the regulatory maze. They either have to hire specialized, $1000-an-hour DC law firms to help them out, or give up. This is by 1%er design, not because of “big government.”

So yes, there are regulatory impediments to competition, but I don't think this form of “cutting regulations” means what the 1%ers on the Jobs Council and the big corporate-elites think it means.

On education, the Jobs Council recommends,

In order to stay competitive in a global age, we must invest in our future by ensuring Americans have the right education and skills to realize their full potential and drive our nation’s economic success. … These measures will create a purposeful educational system that produces work-ready graduates, satisfied employers with access to a talented labor pool, and a vibrant economy poised for growth and success.

With respect to the education section of the report, I believe that the Jobs Council’s education recommendations begin and end in the wrong place: focusing on providing businesses with an endless supply of workers — as opposed to supporting, improving and sustaining a strong public education system.

So the report calls on government to reconfigure our education system to provide companies with trained worker-bees, which means companies don't have to cough up the dough themselves to train their own workers. The report actually goes even further, basically calling for government to replace think-for-yourself education with do-what-we-say job training. There's a difference. And they ask for this after already asking for tax cuts, too. Sheesh.

On energy the 1%ers of course mean “drill, baby, drill.” But the council is correct, we do need to go “all-in” on energy, with massive Green Energy investment, freeing us from the damage Big Oil and King Coal do to our environment, our economy, our politics and our democracy.

On manufacturing the council notes that since 1980 manufacturing has slipped from 20% to only 9% of total employment,. The report calls for adding “three to four percentage points of global value added market share—an ambitious but achievable goal.” They say we should :take share from our global competitors.” There are wonky but great suggestions like “cluster development” and important ideas like going after in promising new manufacturing sectors. The President has formed an Office of Manufacturing Policy that is taking up many of the kinds of recommendations in this report.

In fact, we also need to rewrite our trade agreements so they provide a win-win for the working people here and across our borders, and incentives to manufacture here rather than move jobs, factories, companies and industries out of the country.

And So In Conclusion

Trumka sums things up nicely at the end of his dissent:

Perhaps most profoundly, the report does not ask the critical question: why is our country suffering a manufacturing crisis, complete with massive job loss and a structural trade deficit, when countries with higher overall taxes, higher wages, and more robust health, safety and environmental regulations are enjoying trade surpluses?

Echo and amplify what Trumka said: Perhaps most profoundly, the report does not ask the critical question: why is our country suffering a manufacturing crisis, complete with massive job loss and a structural trade deficit, when countries with higher overall taxes, higher wages, and more robust health, safety and environmental regulations are enjoying trade surpluses?