The unemployment rate fell back to 10.0 percent in November as the pace of job loss slowed to 11,000 for the month. Job loss for the prior two months was also revised downward by 159,000, bringing the average rate of job loss over the last three months to 87,000.

The employment rate for black teens fell to 14.0 percent, an all-time low. 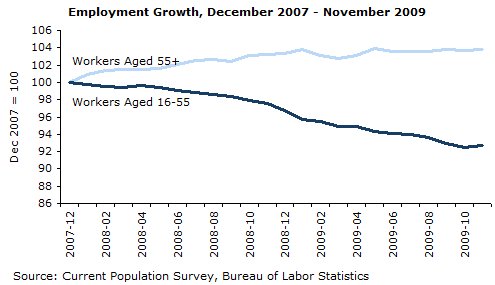 The improved jobs picture in the establishment data is explained by a slower rate of job loss in construction and manufacturing, accompanied by a substantial increase in temporary employment. Construction employment fell by just 27,000 in November. It had been falling at a rate close to 60,000 a month recently and a rate of more than 100,000 a month last winter. Nearly all of the decline is in the non-residential sector. This drop may accelerate in future months as non-residential construction declines further, while employment in the residential sector is likely to remain flat.

This month’s 41,000 drop in manufacturing jobs is comparable to the drop in recent months, but down from a pace of close to 200,000 a month last winter. The decline is relatively evenly spread across industries. One encouraging sign in the sector is that hours appear to be rising, with the average workweek now 0.5 hours longer than at the low in August, and average overtime 0.4 hours higher. It seems likely that employment in the sector will at least stabilize, even if significant hiring may not take place any time soon.

The employment services sector reportedly added 61,100 jobs. With upward revisions to past data, employment in the sector has now grown by 131,200 jobs since July. This is a positive sign since increases in temporary employment tend to precede hiring in other sectors.

Health care added 22,000 jobs, but most other sectors continued to lose jobs at a modest pace. Retail trade lost just 14,500 jobs after losing an average of 35,000 jobs a month the prior three months. With sales still weak, job loss in this sector may accelerate again. Jobs in auto dealers are down by 15.8 percent from their pre-recession levels, even though sales are down by more than 30 percent.

Government employment edged up by 7,000, almost all of it in the federal sector. State and local governments are laying off non-educational workers, but this is being largely offset by increased hiring in education, a direct result of the stimulus. However, this pattern may not continue in future months, with overall employment likely to slip under the pressure of budget cuts.

The drop in the unemployment rate was almost certainly attributable primarily to measurement error. The 10.2 percent figure for October, a jump of 0.4 percentage points from September, exaggerated the true unemployment rate, so the change in November was simply a correction of this sampling error. The employment rate (EPOP) remained unchanged at 58.5 percent.

The mean and median duration of unemployment spells both increased in November, as did the share of the unemployed who have been out of work for more than 26 weeks. All are new record highs.

Wages appear to be growing at a modest pace, rising at a 2.7 percent annual rate over the last quarter. The average wage reported for October was probably an aberration, but even adjusting for this, wage growth is probably still in the 2.0 percent range.

On the whole, this report is much better news than what we have seen since the decline accelerated last September. Still, there is no evidence in this report of anything resembling a robust recovery. It is likely that the economy will continue to shed jobs for at least another month or two and it may be several more months before job growth is fast enough to keep the unemployment rate from rising. And there are many risks that could make this picture less pleasant.