Corporate agribusiness interests, the largest users of federal and state water project water exported through the Delta pumping facilities, have donated a total of $850,000 to the Yes on Prop. 1 campaign. The California Farm Bureau Federation contributed $250,000 and the Western Growers Service Association donated $250,000.

Stewart Resnick, the Beverly Hills agribusiness tycoon, owner of Paramount Farms and largest orchard fruit grower in the world, contributed $150,000 and the California Cotton Alliance contributed $200,000 to the Yes on Prop. 1 campaign. 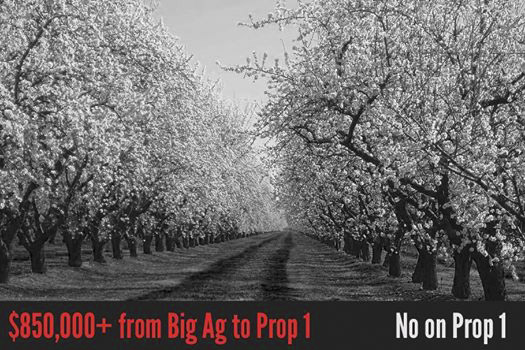 Contributions to the Yes on Proposition 1 and 2 campaigns soared to $13,212,726 on Friday, October 24 as corporate agribusiness, oil companies, billionaires, the health care industry and other corporate interests continued to dump millions of dollars into Jerry Brown’s campaign to pass the water bond.

The California Business Political Action Committee, sponsored by the California Chamber of Commerce, has raised $794,500 and has spent $312,401 for the campaign to date,

The campaign for and against Proposition 1, the $7.5 billion water bond on the November 4 ballot, remains the classic David and Goliath battle of this election season in California.

The top 18 campaign contributors – those who donated $250,000 or more – have raised a total of $11,835,279 to date for the Yes on Prop. 1 and campaign, according to the California Fair Political Practices Commission (FPPC).

Dignity Health, which just contributed $250,000, is the latest corporate contributor to the Yes on Prop. 1 campaign. That donation followed the contribution of $250,000 to the campaign by Aera Energy LLC, a company jointly owned by affiliates of Shell and ExxonMobil.

The Bakersfield-based Aera Energy is one of California’s largest oil and gas producers, accounting for nearly 25 percent of the state’s production, according to the company’s website.

Corporate agribusiness interests, the largest users of federal and state water project water exported through the Delta pumping facilities, have donated a total of $850,000 to the Yes on Prop. 1 campaign. The California Farm Bureau Federation contributed $250,000 and the Western Growers Service Association donated $250,000.

Stewart Resnick, the Beverly Hills agribusiness tycoon, owner of Paramount Farms and largest orchard fruit grower in the world, contributed $150,000 and the California Cotton Alliance contributed $200,000 to the Yes on Prop. 1 campaign.

Resnick and his wife, Lynda, have been instrumental in promoting campaigns to eviscerate Endangered Species Act protections for Central Valley Chinook salmon and Delta smelt populations and to build the fish-killing peripheral tunnels – and have made millions off reselling environmental water to the public.

For an an excellent article on the Resnicks, pleased read, “Water, Money, Taxes, Campaigns, and the Bond: The Resnick Farming Story,” by Barbara Barrigan-Parrilla and various associates.

The largest individual donor in the Yes on Prop. 1 campaign to date remains Sean Parker, who has contributed $1 million to the campaign. Parker is an entrepreneur and venture capitalist who cofounded the file-sharing computer service Napster and served as the first president of the social networking website Facebook. He also cofounded Plaxo, Causes, and Airtime. As of September, 2014, Parker’s net worth was estimated to be $3.1 billion, according to Wiikipedia.

Four members of the Fisher family, who own the controversial Gap stores and Mendocino Redwood Company, have collectively donated $1.5 million to the Yes. on Prop. 1 and Prop. 2 campaign.

In contrast to the $13,212,726 in donations to the Prop. 1 and 2 campaigns listed on the FPPC website, the FPPC states, “No committee opposing this ballot measure raised enough money to reach the reporting threshold.”

Governor Brown’s $7.5 billion water bond includes $2.7 billion for new dams and is a serious threat to the Delta and Central Valley rivers and fisheries, according to grassroots fishing and environmental groups.

“These are deadbeat dams,” said Ron Stork, Senior Policy Advocate for Friends of the River (FOR). “You can’t dam your way to paradise with deadbeat dams. It’s just that simple.”

“We’re going to spend $2.7 billion to increase our water supply by 1 percent,” said Stephen Green, president of Save the American River Association (SARA). “That is not a good use of the money.”

Bill Jennings, Executive Director of the California Sportfishing Protection Alliance (CSPA), sums up why it is so important for people concerned about the future of salmon, the Delta and California to vote against the water bond: “Prop. 1 is a poster-child of why California is in a water crisis: it enriches water speculators but accomplishes little in addressing the drought, solving California’s long-term water needs, reducing reliance on The Delta, or protecting our rivers and fisheries.”

Read CSPA’s 14-Point Analysis and Statement of Opposition to the Proposition 1.

As corporate interests continued to dump millions of dollars into the campaign coffers to pass the water bond, Redding area tribal leaders, river and groundwater protection advocates announced Friday they will oppose Proposition 1, the State Water Bond, at a news conference in Redding on Monday, Oct. 27.

“The Sacramento River and the tax payers of California deserve better than this water bond. This bond does little for fisheries, little for multi-benefit flood protection projects needed in Northern California, and little to provide short or long term solutions to the water problems in our state,” said Lucas Ross-Merz, of the Sacramento River Preservation Trust.

WHERE: Lake Redding Park, Redding (Next to the river off of Market Street by the salmon jump viewing area)