© 2023 Truthout
Interview
|
Colombian GM Worker on Hunger Strike: “We’re in this up to the Final Consequences“

The stakes have never been higher for General Motors activists in Colombia, who have vowed to take their hunger strike to the ultimate conclusion – death, if necessary. An interview with a striker who says his family’s life depends on it.

Jorge Parra, 36, president of ASOTRECOL, hasn’t eaten for two weeks. This is the third hunger strike against GM since August 1, when he and co-workers from a General Motors plant in Bogotá, Colombia, first sewed their lips shut.

In May 2011, after about a year-and-a-half of organizing, 68 current and former autoworkers formed ASOTRECOL (the Association of Injured Workers and Ex-Workers of General Motors Colmotores). Three months later, ASOTRECOL workers began camping across the street from the US embassy in Bogota. One year after living in tents, on August 1 this year, members of ASOTRECOL began the first hunger strike. Two weeks later, on August 15, GM executives and lawyers traveled to Bogota to begin mediation with the workers.

Initially GM offered $5,000 to 12 workers, and then later bumped the offer to $30,000 per worker. Some of these workers are dealing with spinal injuries, where “one operation costs about $50,000, because it’s not just the surgery,” as Jorge explains. “Without physical therapy, we’re still about 6 months without work.” Those who can’t afford medical treatment are simply abandoned to rot or die, disposed like waste products.

The first hunger strike was lifted after 22 days, sensing some promise with the US government’s Federal Mediation and Conciliation Service, but then restarted by seven workers on September 3 after GM abandoned negotiations. On September 4, Jorge Parra arrived in Detroit to bring the struggle to GM’s hometown. And since arriving in the US, there have been protests and actions around the Midwest, including Madison, Milwaukee and Portland, where about 150 people showed up. There have also been vigils at the homes of GM CEO, Dan Akerson and Labor Relations VP, Cathy Clegg.

Last week, I spoke with Jorge in southwest Detroit about his organization, the actions of GM, and why, for workers who have spent 490 days seeking justice, this is the definitive hunger strike. “We know what could happen,” he said, “but we have to do something or else our children would die of hunger.”

Thanks for being here, Jorge. Who are the members of your organization, ASOTRECOL?

We are workers fired when we became injured or sick working for GM. We were all injured as workers on the job. We are welders, mechanics and electrical workers. We were all involved in automobile assembly for a GM plant in Bogotá, Colombia.

This is common procedure. The problem is that most of us remain silent. We started this organization precisely because our compañeros were getting sick at work. They became sick and we decided to organize ourselves, defend ourselves and to demonstrate that we were fired for being injured on the job.

What happens to those who get sick on the job?

Generally they’re pensioned. This is what should be the law because GM accepted the worker’s comp; but for workers with spinal injuries, [the way they see it], if they give it to one, they’ll have to give it to everyone. And because of this, we denounce the majority of our government labor officials over what is happening. It was a great surprise when the same defenders of our rights as workers … essentially [colluded] … with GM to allow them to fire us without fulfilling the laws. They actually sanctioned one of the Minister of Labor investigators with one year of suspension for corruption and falsifying public documents. 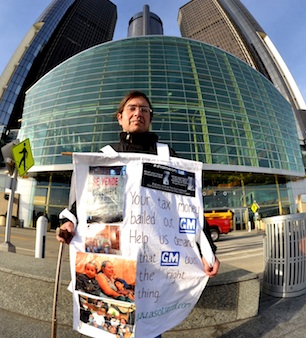 Jorge stands on the riverfront, holding a sign that reads: “Your tax money bailed out GM. Help us demand that GM does the right thing. www.asotrecol.com.” (Photo: Martha Quezada Hernández )What redress is possible through the courts, as with the Ogoni people in Nigeria against Shell, and the Amazonian people in Ecuador against Chevron?

This situation is so desperate – what’s happening. It’s the country known for the worst violence against unionists. And in three decades there have been more than 3,000 unionists killed. And this is a policy directed by multinational corporations that pay the assassins and paramilitaries. Our country is completely dominated by American imperialism. So the politicians are in favor of defending the multinationals’ interests. And the courts are, too. It’s a cancer.

When did the hunger strikes begin?

We began on August 1, 2012, and we kept at it 22 days until we signed an agreement that the General Motors executives of Detroit will come to Colombia. And they promised us that they were going to begin negotiations for a solution. This is the third and definitive hunger strike because we were deceived the first and second time that GM was going to negotiate with us justly.

Can you give some background on the mediation process?

[That] began after we decided to … sew our lips shut and begin the strike the first time. This was on August 1 this year, when we began sleeping in tents in front of the US embassy.

When they (agents from the Federal Mediation and Conciliation Service) arrived in Colombia they said we had four days to get to a solution. And on the second day they were worried because we had not arrived at any; and this is because we weren’t talking of an economic fix – what we were demanding was a re-integration into the workforce, into positions that didn’t sicken us, and the back-pay for being fired. And GM said no. They just wanted to arrive at a financial resolution because we were considered persona non grata. And they began the mediation solely based on finances, and they ignored that primarily what we’re demanding are medical services. We are unemployed and disabled thanks to General Motors. And we are without income and without any form of health insurance.

This is how we’re treated. We’re living in conditions very different than people are accustomed to in the US.

What are some of those injuries that develop from the workplace? 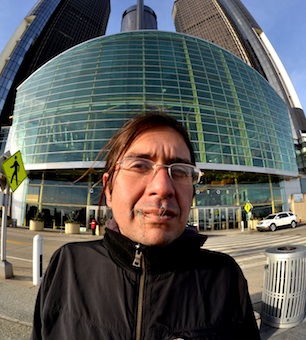 Jorge Parra looks ahead. (Photo: Martha Quezada Hernández)Can you explain how the struggle was brought to GM’s home in Detroit?

We arrived here after the mediation failed in Colombia. And we arrived under the hopes of talking to GM, which in Colombia was impossible. And so the job is to look for a solution here, in GM’s home office. We have received communications from GM that they want to help but not for two months.

But the more time that passes, the harder it is to persist in our tents. We started with 68 members in front of the embassy and now we’re down to only 12. People can’t keep up a fight for so long. And for those who have children, it is only worse. We who remain – it’s because we’ve lost practically everything.

Now GM is gaming us to take more time, and then we will be even less, because one month for them doesn’t mean anything, but for us it’s the difference between life & death.

What are you asking allies in the US to do when they become informed of this struggle?

We want them to help us in writing to GM, asking them to find a solution for us in Colombia, also to demand that their government make GM fulfill its obligations, that they understand all we want is the same conditions as workers here, that we started this hunger strike and we’re not going to stop even with a pledge of mediation, that we’re only going to stop when there’s a solution.

And our demands are:

That GM re-integrate us into the workforce

That we receive re-education and retraining

That GM accept its responsibility for our health problems.

How long has the third hunger strike been going for, and for how long more?

Today we completed 14 days. And we don’t know when it ends yet. Until it resolves our demands. Not just promises. It’s that they resolve the situation. And if they don’t we’re going to die. Of all the ways we demand they respect our rights, these have the gravest implications. So we know what could happen, but we have to do something or else our children would die of hunger. So we’re in this up to the final consequences.

Share
Copyright, Truthout. May not be reprinted without permission of the author.
Tolu Olorunda