New Delhi—In a fraught global economic environment, exacerbated by climate change and shrinking resources, ensuring food and nutrition security is a daunting challenge for many nations. India, Asia’s third largest economy and the world’s second most populous nation after China with 1.3 billion people, is no exception.

The World Health Organization defines food security as a situation when all people at all times have physical and economic access to sufficient and nutritious food that meets their dietary needs and food preference for an active and healthy life. The lack of a balanced diet minus essential nutrients results in chronic malnutrition.

According to the Global Hunger Index 2014, India ranks 55 out of the world’s 120 hungriest countries even behind some of its smaller South Asian counterparts like Nepal (rank 44) and Sri Lanka (39).

Despite its self-sufficiency in food availability, and being one of the world’s largest grain producers, about 25 per cent of Indians go to bed without food. Describing malnutrition as India’s silent emergency, a World Bank report says that the rate of malnutrition cases among Indian children is almost five times more than in China, and twice that in Sub-Saharan Africa.

So what are the reasons for India not being able to rise to the challenge of feeding its poor with its own plentiful resources? Experts ascribe many reasons for this deficit. They say the concept of food security is a complex and multi-dimensional one which becomes even more complicated in the context of large and diverse country like India with its overwhelming population and pervasive poverty and malnutrition.

According to Shaleen Jain of Hidayatullah National Law University in India, food security has three broad dimensions — food availability, which encompasses total food production, including imports and buffer stocks maintained in government granaries. Food accessibility- food’s availability or accessibility to each and every person. And thirdly, food affordability- an individual’s capacity to purchase proper, safe, healthy and nutritious food to meet his dietary needs.

There are other challenges which India faces in attaining food security, adds the expert. “Natural calamities like excessive rainfall, accessibility of water for irrigation purpose, drought and soil erosion. Further, lack of improvement in agriculture facilities as well as population explosion have only made matters worse.” 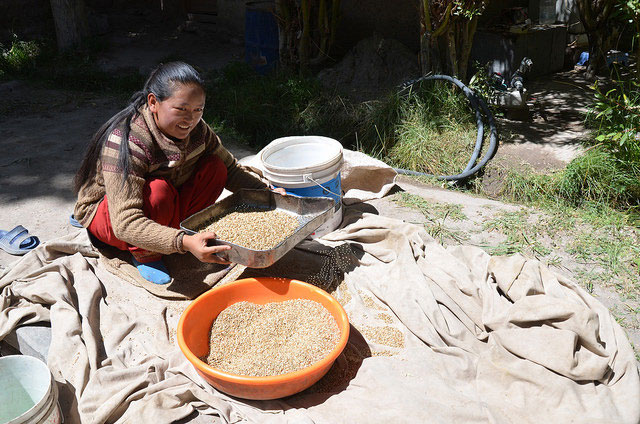 To grapple with its food security problem, India operates one of the largest food safety nets in the world — the National Food Security Act 2013. India’s Department of Food and Public Distribution, in collaboration with World Food Program, is implementing this scheme which provides a whopping 800 million people (67 percent of the country’s population or 10 percent of the world’s) with subsidised monthly household rations each year. Yet the results of the program have been largely a hit and miss affair, with experts blaming the country’s entrenched corruption in the distribution chain for its inefficacy.

The global food security challenge is unambiguous: by 2050, the world must feed nine billion people. To feed those hungry mouths, the demand for food will be 60 percent greater than it is today. The United Nations has set ending hunger and achieving food security and promoting sustainable agriculture as the second of its 17 Sustainable Development Goals (SDGs) for the year 2030.

“To achieve these objectives requires addressing a host of critical issues, from gender parity and ageing demographics to skills development and global warming,” elaborates Sumit Bose, an agriculture economist.

According to the economist, India’s agriculture sectors have to bolster productivity by adopting efficient business models and forging public-private partnerships. Achieving sustainability by addressing greenhouse gas emissions, water use and waste are also crucial, he adds.

To work towards greater food security, India is also working in close synergy with the UN Food and Agriculture Organization (FAO) which is not only an implementer of development projects in the country, but also a knowledge partner, adding value to existing technologies and approaches. The agency has helped India take the holistic “seed to plate” approach.

Also being addressed are challenges like livelihoods and access to food by poorer communities, sustainability of water and natural resources and soil health have moved centre stage. The idea, say experts, is to augment India’s multilateral cooperation in areas such as trans-boundary pests and diseases, livestock production, fisheries management, food safety and climate change.

FAO also provides technical assistance and capacity building to enable the transfer of best practices as well as successful lessons from other countries to replicate them to India’s agriculture system. By strengthening the resilience of smallholder farmers, food security can be guaranteed for the planet’s increasingly hungry global population while also whittling down carbon emissions.

“Growing food in a sustainable way means adopting practices that produce more with less in the same area of land and use natural resources wisely,” advises Bose. “It also means reducing food losses before the final product or retail stage through a number of initiatives including better harvesting, storage, packing, transport, infrastructure, market mechanisms, as well as institutional and legal frameworks.

“India is a long way off from all these goals. The current dispensation would do well to work towards them if it aims to bolster India’s food security and feed its poor.”