California is making it slightly more difficult for millionaires and billionaires like the Koch Brothers to secretly and fraudulently influence elections in the state.

As the Sacramento Bee tried to report it…

Nonprofit organizations that make political contributions in California will have to disclose more information about the source of their money under a law Gov. Jerry Brown signed Wednesday.

Senate Bill 27 was inspired by the 2012 ballot measure wars in California, when two out-of-state nonprofit groups poured $15 million into fighting Proposition 30 and supporting Proposition 32. Because of the groups’ nonprofit status, they were not required to report where their donations originally came from, leading some to describe the contributions as “dark money.”

“Leading some to describe”? It was dark money! The groups did not disclose who the donors were when they spent millions and millions of that dark money to try and fraudulently effect election outcomes in the state!

It was all money laundered through Koch Brothers front groups, as the SacBee failed to note for some reason, but as the Mercury News reported last year when the scheme finally came to light…

It was California Republican fundraiser Tony Russo’s idea to solicit donations for nonprofit groups with 501(c)4 status as a way to conceal donors’ identities, according to documents released by the FPPC [California’s Fair Political Practices Commission]. For federal tax purposes, non-profit groups with that distinction are not required to name their contributors.

In an interview with state investigators, Russo said he consulted representatives of the Koch brothers about his plan and won their support.

The entire scheme was run through two Rightwing dark money outfits calling themselves the American Future Fund and the ironically-named Americans for Responsible Leadership.

It was that failure to disclose, which the law signed by Brown is meant to prevent from here on out.

But let’s continue with SacBee…

The state’s political watchdog went after the groups and secured a $1 million settlement last fall when the Arizona nonprofits acknowledged an error in campaign finance reporting. But requiring politically active nonprofits to disclose their donors required a change of state law.

“An error”? It was not an error, SacBee, the entire scheme was meant to hide the names of the people, most of them millionaires and billionaires, who made the political donations. Aside from the $1 million fine to the out-of-state group, the two pretend organizations which received the $15 million in dark money to spend on CA election propaganda were also required to pay back the $15 million to the state as part of the same action.

Of course, by the time they were caught having bastardized our democracy, it was too late to do anything about it. The elections had already been effected, and the $15 million was gone, as Mercury News explained last year…

The Small Business Action Committee will be forced to pay $11 million, and the California Future Fund for Free Markets will have to pay $4.08 million. However, it wasn’t immediately clear how the two groups will make these huge payments since the money is long gone.

So, yes, through a complicated scheme of millionaires and billionaires giving money, secretly, to non-profit “social welfare organizations”, who gave the money to other such groups, who then gave it to other groups to directly influence elections, they got away with it. Of course, the Kochs have more than enough to repay that $15 million. As do many of the donors involved in the scheme, such as Koch pal Charles Schwab. But they won’t. And, unlike you or I, if we were caught passing, let’s say, a fake $20 bill, none of the people involved in the scheme will ever spend a day in jail for having essentially laundered millions.

Back to SacBee, which failed to mention anything at all about the source of all of that dark money, thus, helping to still keep the spending in the dark…as “some” would describe it.

And that’s where Sen. Lou Correa’s SB 27 comes in. The bill by the Santa Ana Democrat requires nonprofit groups disclose the names of donors who give them $1,000 or more to spend on political activity in California, if the group makes contributions of more than $50,000 in a year, or $100,000 over four years. The disclosure requirement kicks in with donations made after July 1 of this year.

Well, good. It’s a start anyway. At least until the Kochs and friends figure out how to get around that requirement as well, or until their friends on the U.S. Supreme Court invent something “unconstitutional” about it.

For the record, the $15 million in dark money was all wasted by the Rightwing dumb-asses. Proposition 30, a tiny, temporary tax increase on the very wealthy, which, naturally, they opposed, passed anyway. It put California, almost immediately, back into the black. Thanks to Republicans in the state legislature who refused to raise taxes to help pay the bills, the state spent years in deficits. (Remember all those Rightwingers who, until very recently, used to claim: “Thanks to liberal California policies, the state is now bankrupt!”?) Since Prop 30 passed in 2012, by a huge margin, the state is now running a very healthy, multi-billion dollar budget surplus.

As The BRAD BLOG’s Ernie Canning explained in early 2013:

Year-after-year, the CA GOP utilized the Golden State’s requirement of a 2/3 vote for passage of either spending or revenue enhancing measures as a means to force austerity, such as former Republican Gov. Arnold Schwarzenegger’s draconian $15 billion cuts to education and health care. By refusing to pass a budget, the CA GOP at one point forced the state controller to issue $2.6 billion in IOUs. And, all during the CA GOP reign of economic terror, the Golden State’s budget deficit expanded —- reaching an indebtedness in excess of $20 billion despite those massive cuts.

Democracy struck back. The percentage of CA voters who are registered Republicans dropped to less than 30%. During the 2012 election, CA voters passed a relatively progressive, revenue-enhancing tax measure supported by Gov. Jerry Brown (D) by a wide margin [that was Prop 30] and the GOP’s ability to hold the state hostage was eliminated when Democrats achieved a super-majority in the state legislature.

As a result, fiscal sanity was restored. CA is now on track to achieving a budget surplus even as $5.2 billion has been added to the state’s school, university and health care budgets.

That sort of “fiscal sanity” is what the Koch Brothers’-funded “Americans for Responsible Leadership” was hoping to avoid.

The other initiative, Proposition 32, was opposed by the Koch scofflaws. That initiative went down to defeat in 2012, despite their secret millions. Here’s an email obtained by the California investigators (via Andrew Kroll at Mother Jones), in which Charles Koch’s “several millions” were sought for the scheme… 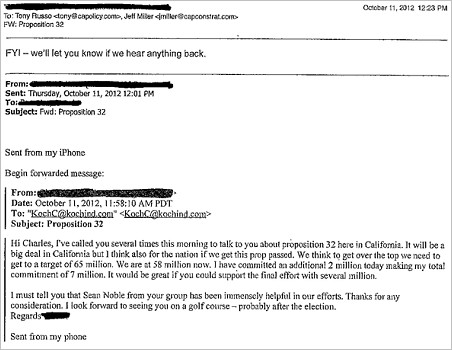 That initiative, had it passed, would have barred unions from using member dues for political purposes. So, of course, dark money billionaire donors like the Kochs were against it. They want to be the only ones able to influence our theoretically democratic elections.

As of now, anyway, thanks to the bill signed by Brown in California last week, it’ll be slightly harder for a tiny handful of millionaires and billionaires to do that. At least in California…At least under the cloak of secrecy.

It would have been nice if the SacBee had helped readers understand all of that. The role of the media is, after all, to inform the electorate (supposedly). Informing them about elections, and the very powerful people working to undermine them, would seem to be priority number one. Unfortunately, the bulk of the corporate mainstream media still do not seem to share that interest.