This time of year, the fabric that separates our world from prowling ghouls is at its thinnest. But what really keeps us at YES! Magazine up at night are the international trade agreements constantly being negotiated by the United States and its partners—each one more terrifying than the last.

How can something as pleasant-sounding as “free trade” be more threatening than a zombie apocalypse? The devil’s in the details, and the fine print on some of these agreements is enough to curdle a bucket of blood.

Whether it’s blocking a ban on chocolate-flavored cigarettes marketed to kids, or rolling back post-2008 regulations on Wall Street, these deals have a way of favoring corporations over people. They’re not popular, as you might imagine, and in some cases people’s movements have been able to stop them in their tracks. In response, proponents of the deals have attempted to slip under the radar by conducting negotiations in secret.

Here are four of the scariest deals—and why they’re so abominable. 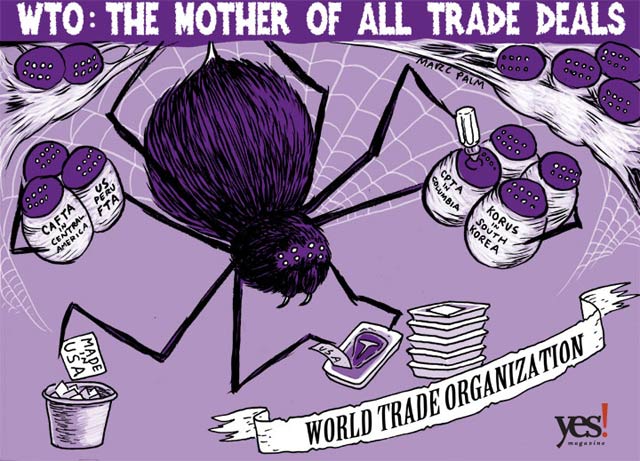 The World Trade Organization, created in 1995 as a re-imagining of an earlier group called the General Agreement on Tariffs and Trade, is the mother of all trade bodies and sets the rules for the flow of goods and services between countries. The WTO claims its goal is to “improve the welfare of the peoples of the member countries.” But critics say what it really does is force poor nations to open their markets to wealthier ones, who themselves often bend the WTO’s rules.

The WTO also gives companies a place to complain about regulations enacted by democratically elected governments. It has found fault with laws protecting public health, the environment, workers’ rights, and other things that would affect industries’ bottom line. Recent rulings have objected to producers labeling certain kinds of tuna as “dolphin safe;” the U.S. Food and Drug Administration’s ban on sweet-flavored cigarettes that entice kids; and labels that inform consumers what country meat products originated in. The WTO says such labels violate the rights of Mexican and Canadian farmers to a level playing field. The United States sometimes refuses to comply—but risks trade sanctions when it does so.

Perhaps most frightening of all, the WTO (along with NAFTA) has spawned a whole new brood of bilateral and regional deals that take the same approach to trade and development. 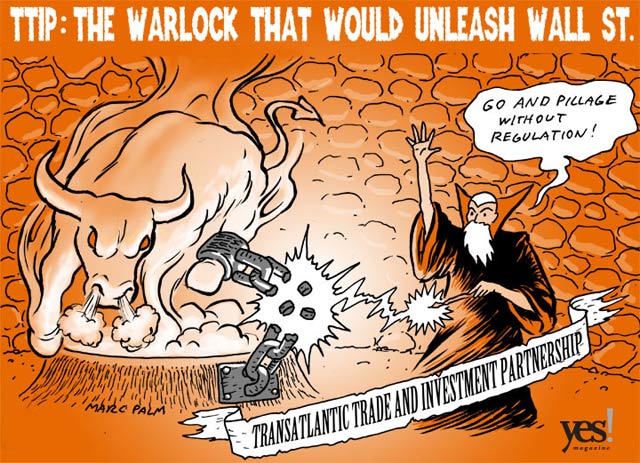 The Transatlantic Trade and Investment Partnership, if approved, would promote trade between the United States and the European Union.

The deal has some bright spots—for example, it would universalize the plugs for electric cars. But American negotiators are also pushing hard to overturn Europe’s ban on imports of U.S.-grown genetically modified crops. Meanwhile, European negotiators and bankers are trying to set Wall Street free from regulations passed after the financial crisis of 2008. According to the nonprofit research group Public Citizen, they want to roll back the Volcker Rule, which restricts U.S. banks from the riskiest investments, and to block efforts to limit the size of banks. 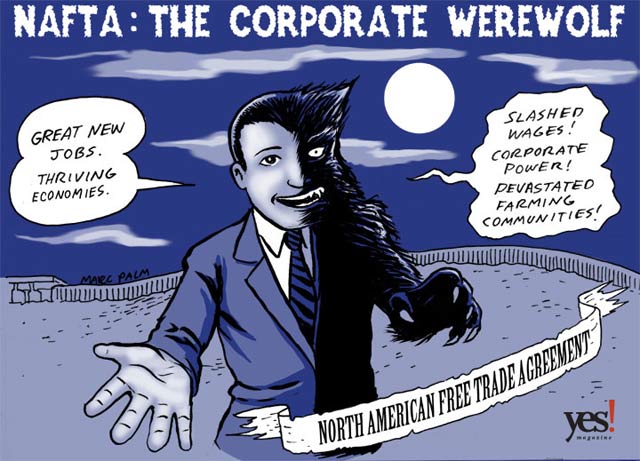 When President Bill Clinton signed the North American Free Trade Agreement with Mexico and Canada in 1993, he sold it to the people of the United States as a job creator. “NAFTA means jobs,” he said. “American jobs, and good-paying American jobs.”

More than 20 years later, the agreement’s dark side is showing. The U.S. government’s own Trade Adjustment Assistance program acknowledges that nearly 900,000 workers in the United States have officially lost their jobs due to the relocation of businesses to Canada or Mexico under NAFTA. Meanwhile, exports of cheap U.S. corn have damaged the livelihoods of Mexican farmers and driven huge waves of migration. Between 1990 and 2000, the number of Mexican-born people living in the United States more than doubled from 4.5 million to 9.8 million. 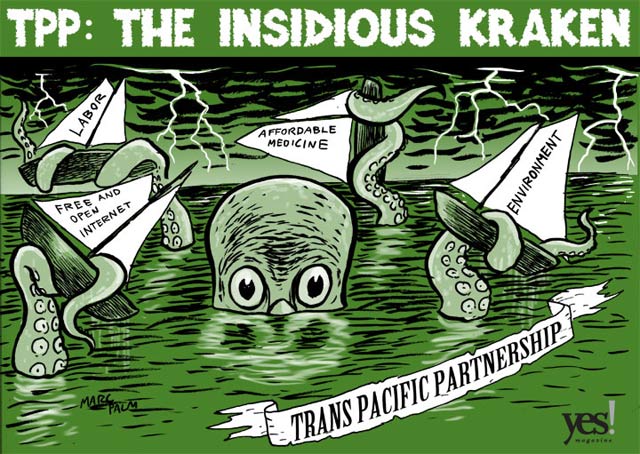 The Trans Pacific Partnership, if approved, would unite 12 Pacific Rim countries into the world’s largest free trade area, comprising 40 percent of the global economy. When he spoke about the TPP in 2011, President Barack Obama, who has made the deal’s passage a major objective of his administration, sounded a lot like Clinton in 1993. Obama said the deal “will boost our economies, lowering barriers to trade and investment, increasing exports, and creating more jobs for our people.”

But leaked sections of the agreement’s secret text show the TPP taking more controversial stances—and it has its tentacles on a breathtaking variety of issues. On health care, U.S. negotiators seem to be working at the behest of the pharmaceutical industry, trying to extend the rights of patent-holders to charge more money for medicines. On labor, the TPP makes it easier for companies to move manufacturing to low-wage Vietnam, but offers no enforceable provisions to prevent abuse. On the environment, it preserves the status quo, doing little to prevent the illegal logging and overfishing that are taxing the forests and oceans of the region.

Last but not least, advocates of a free Internet are up in arms over sections in the TPP’s intellectual property chapter they say would significantly diminish the free speech rights of web users.

Marc is an un-schooled artist who has been self-publishing comics and graphically designing since the mid-90’s. Find more of his work at marcpalm.carbonmade.com.