Support from readers enables the publication of stories like this one — and helps keep Truthout free from advertising. Click here to support us with a donation!

Coral bleaching occurs when corals become stressed by warmer-than-normal water, causing them to expel symbiotic algae that lives in their tissues from which they get their energy. Coral turns completely white when it bleaches, and if it remains bleached long enough, it dies.

Last week, I investigated several areas along the outer edge of the reef and closer to shore with members of the Great Barrier Reef Legacy, a nonprofit environmental organization that works to promote better stewardship of the reef by providing free access for scientists. In the areas I saw firsthand, 10 percent to 95 percent of all the coral was already undergoing bleaching (depending on the location).

Coral bleaching occurs when water temperatures become too warm for the coral to survive. If the waters do not cool back down within 3-6 weeks from when the bleaching event begins, the coral will die.

“95 percent of all this coral is now bleached,” John Rumney, the managing director of Great Barrier Reef Legacy, told Truthout upon surfacing from snorkeling in an area northeast of Port Douglas, Australia. Rumney was referencing this specific area, and said, “The question is, how long will it stay bleached, and what will the mortality rate be?”

The coral, which is normally vibrant shades of most of the colors of the rainbow when healthy, turns completely white when bleached.

“This bleaching event will continue — there’s nothing to indicate that this will not continue,” Rumney told Truthout while pointing to the reefs we’d just seen. 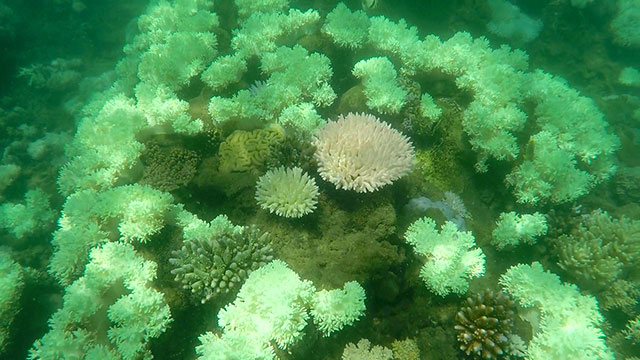 Bleached coral off the coast of northeastern Australia is the result of warming ocean temperatures. Save a dramatic weather event to lower the water temperatures within the next few weeks, most of this coral will die. (Photo: Megan Proctor)

During last year’s major bleaching event, the largest ever recorded to have struck the GBR, 93 percent of the area of the reef was impacted. When the coral spawned during last November and December, there was less spawning than usual, since more than one-fifth of the reef had died.

Hence, large areas have been unable to recover from the 2016 event, and another event is already well underway. According to Rumney, who has been diving the reef for 42 years, the new event is already extensive.

“This coral is in big trouble,” Rumney said. “Compared to the 2016 event, it definitely did not bleach this bad in this area last year.” He noted that the current bleaching event is further inshore than last year’s, and has also extended further to the south.

The death of this coral is, undoubtedly, globally significant. The Great Barrier Reef, off the Eastern Coast of Australia, is the largest living thing on Earth. Easily visible from space, the 1,400-mile-long, 133,000-square-mile ecosystem is home to more than 1,500 species of fish and over 600 types of hard and soft corals. Portions of the reef have been dated as old as 20 million years.

Yet, particularly with the advent of this most recent event, this World Heritage Site is now on the brink of vanishing. Warming ocean waters are regularly causing coral bleaching. Agricultural pesticides and fertilizers, along with sediment runoff, dredging and land-mining operations are contributing to the demise, but human-caused climate disruption remains the reef’s primary nemesis.

“According to coral records from the reef, we’ve never seen bleaching events like this,”

Dr. Dean Miller, a marine scientist and director of science and media for the Great Barrier Reef Legacy, told Truthout on the boat.

A February 14 report from the National Oceanic and Atmospheric Administration (NOAA) shows a 60 percent probability of all global coral bleaching from thermal stress (warm waters) from this month through May 2017.

However, the same report indicates that the Far Northern and Northern GBR are already under a bleaching warning. These areas are classified as “Alert Level 1,” which means bleaching is likely. Meanwhile, Alert Level 2 conditions (meaning that coral mortality likely) exist for the North, Central and Southern GBR.

This means that, at this moment, the entirety of the GBR is already in either Alert Level 1 or Alert Level 2 coral bleaching conditions.

As of February 2017, what is occurring at the Great Barrier Reef is the longest and most widespread coral bleaching event ever recorded, according to NOAA.

According to a 2016 Climate Council of Australia report about the major coral bleaching event that killed 22 percent of the reef, a “catastrophe” was underway along the GBR because sea surface temperatures were 1C above their recent long-term average (2002-2011), due to ACD-driven record-breaking surface temperatures across the region.

The report, at the time, said the GBR was “at a crisis point,” setting the stage for this new bleaching event, which may prove to be as bad as the event that hammered the reef last year.

It is also worth noting that El Niño, which was blamed for the extremely warm seawater temperatures behind the bleaching event last year, has already passed.

A 2016 study published in the prestigious journal Nature predicted that by the year 2050, more than 98 percent of global coral reefs will be afflicted by “bleaching-level thermal stress” every single year. A 2011 NOAA report had already warned that all of the world’s coral reefs could disappear by 2050, barring ” urgent action” to stop warming seas, extreme weather events and ocean acidification, as well as overfishing, coastal development, agricultural runoff and shipping.

The NOAA report warned that 90 percent of all reefs would be threatened by 2030, and nearly all reefs will be at grave risk by 2050.

“I think it’s too conservative, I really do,” he explained. “Corals need many years to adjust to the warmer ocean waters, and we don’t have that kind of time anymore. The warming we are seeing now is happening far too fast to allow for evolution…. So what we’re seeing now is death. That’s what bleaching is.” 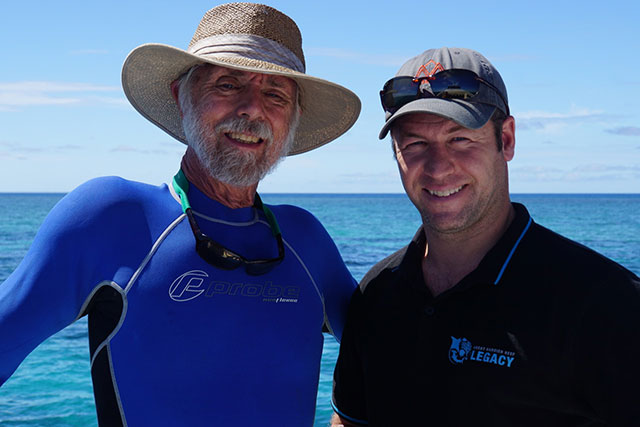 “When all that coral goes, all that diversity of fish that depends on it goes,” he told me, looking out at the GBR. “The entire food chain is in big trouble.”

“If we lose the coral, we lose habitat for all the marine life that depends on it,” he said. “We might see ecosystem collapse as we know it.”

Share
Copyright, Truthout. May not be reprinted without permission.
Dahr Jamail