By
John Schmitt,
Center for Economic and Policy Research

But the current minimum wage looks even worse when compared with two kinds of purchases strongly associated with a middle-class standard of living or the ability to move up to the middle class: health insurance and a college degree.

The table below shows the results of a simple exercise. We ask how many hours did a minimum-wage worker have to work to pay for a year of college education (at various kinds of institutions) or a year of health insurance (for an individual or a family). The table compares the experience facing a minimum-wage worker in 1979 — when the minimum wage was $2.90 per hour — with that of a minimum-wage worker in 2010 or 2011 — when the minimum wage was $7.25. (All wages and prices, here and below, are in current dollars — that is the actual dollar value at the time, without any adjustment for inflation. The point is to compare the minimum wage in place in each period with the actual cost of health and education services at the same point in time.) 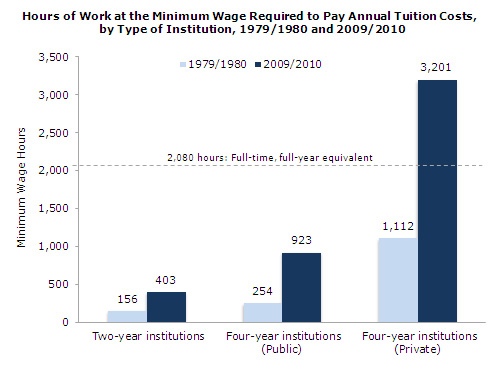 In 1979, a four-year private college required 1,112 hours of work at the minimum wage. By 2010, the cost in minimum-wage hours had increased so much that it was no longer possible to pay for a full year of a private four-year college — 3,201 hours — by working full-year, full-time (2,080 hours) at the minimum wage.

Even the minimum-wage hours needed to pay tuition for one year at a two-year college almost tripled between 1979 and 2010, from 156 hours to 403 hours.

Health-insurance premiums have also increased enormously when expressed in terms of the minimum wage. In 1979, one year of individual health insurance coverage cost a minimum-wage worker 130 hours. By 2011, the same coverage cost 749 hours. 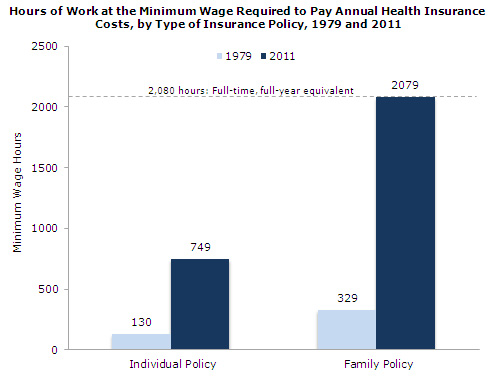 The cost of family coverage increased from 329 hours in 1979 to 2,079 hours in 2011. These figures imply that after paying for family health insurance coverage, a minimum-wage worker would have just one hour of work left over to spend on other goods and services after working 40 hours per week for 52 weeks in a year.

Of course, this analysis does not factor in taxes paid (or the effects of the Earned Income Tax Credit, which was introduced in 1975). The actual number of after-tax hours required would be higher than the pre-tax hours used here; though the Earned Income Tax Credit can offset the cost of taxes for some low-wage workers, particularly those in low-income families with children. (For a discussion of the relevant workings of the EITC, see this recent CEPR report.) Nor do the numbers in the table capture important differences over the period in the effective costs of college tuition and health insurance facing minimum-wage workers.

In the case of college tuition, federal grants and loans are more generous today than they were at the end of the 1970s. As a result, the increase in the costs of college tuition, net-of-federal-grants, is lower for the average minimum-wage worker than is suggested by the chart. Nevertheless, the increases in grants have not kept pace with increases in tuition (as well as room and board, books, and other expenses, which we do not include in our analysis). Meanwhile, the substantial increase in the use of student loans has meant that many minimum-wage workers today would leave college (with or without their degree) with a much higher level of debt than was typical at the end of the 1970s.

Some economists emphasize the rapid decline over the last century in the relative price of agricultural products and manufactured goods (such as televisions and air conditioners). These analyses, however, inevitably ignore or downplay the large relative increases in the price of crucial services such as education and healthcare. Minimum-wage workers today may be able to buy DVD players that did not exist in 1979, but at the current level of the minimum wage, they are also far less able to cover college tuition or health-insurance premiums. 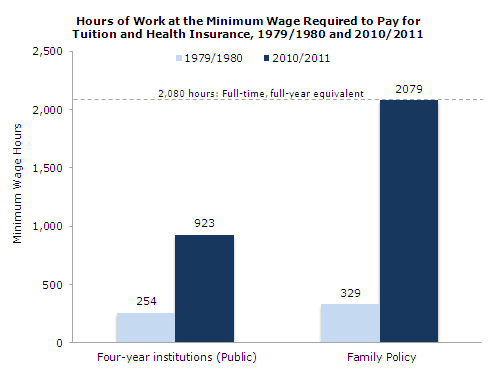 (For a printable version of the full issue brief, complete with a data appendix, click here.)