Fear is a strange thing. It diminishes us, makes us small and introspective, locked into a narrative of violence and rejection: fear of outsiders, fear of terrorists, fear of economic collapse and political fragmentation. We, the people of Europe, have lived with these fears for far too long. It struck me on the glorious shores of the Greek island, Lesbos, that our fears might finally be defeated.

Nearly 550,000 Middle-Eastern and African refugees have passed through Lesbos since January 2015, on their way to sanctuary in Europe – a historic event that reverses 200 years of migration out of Europe to the US, Australia and beyond. I have been working for the aid agency Internews to provide refugees adequate information on how best to negotiate their journey across the island and onwards through Europe to their final destinations. 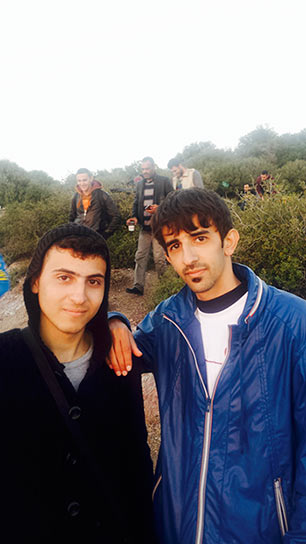 Two friendly young Syrian men near Oxy Transit Camp. “On Lesbos, I believe we have been handed a clear opportunity to defeat the ideologues, the beheaders, the murderers, the torturers and tyrants,” writes James Fennell. (Photo: Peter Bach)Last November, I witnessed the latest arrivals – people who had paid Turkish traffickers $1,000 per person for a barely functional Chinese-made rubber dingy to navigate the six-kilometer passage from Turkey to Lesbos. At Skala Sykaminia – a blue and white painted fishing village more used to high-end tourism than humanitarian crisis – the weather had finally turned. The Mediterranean was a millpond, and my colleagues told me that many refugees would attempt to make the often perilous journey. Previously, the weather had been less benign; at least 15 people died during the crossing when their boats capsized.

Sure enough, as we scanned the horizon, an inflatable boat emerged through the haze, lit up by the bright orange of 50 to 60 life-jacketed passengers. The calm waters ensured there were no unfortunate incidents this time, and as the boat crunched onto the boulder-strewn strand line, the people inside it raised their hands as one, as if in surrender. 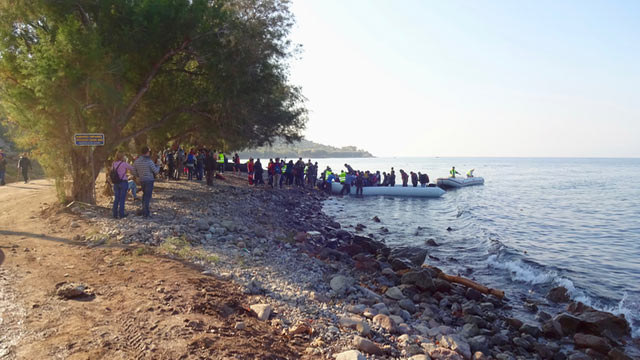 They keep coming: as many as 10 dinghies an hour land from Turkey on Sykamia beach on the north coast of Lesbos. (Photo: Peter Bach)

Women and men embraced us. They told us of the horrors of their journeys – the guns and knives and brass knuckles that have marked their odyssey through Iran and Turkey. As they spoke, compassion welled up inside us – Syrians, Afghans, Britons and Greeks.

We have choices to make. There are probably occasional people with dangerous intent among this great migration. But well-meaning people – victims of the raging firestorm that engulfs the Middle East – vastly outnumber them. If Europe rejects those who seek sanctuary, we hand victory back to ISIS, the Taliban and Assad and give renewed force to their xenophobic mythologies. 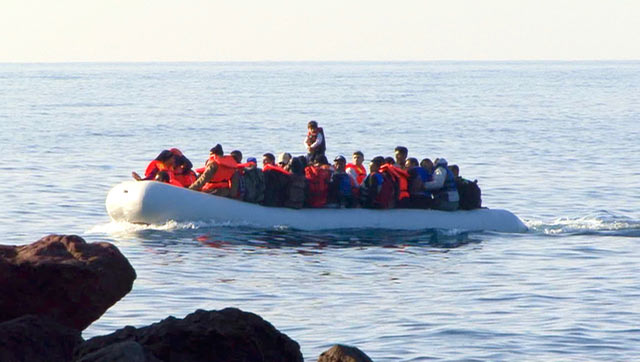 “An inflatable boat emerged through the haze, lit up by the bright orange of 50 to 60 life-jacketed passengers,” writes James Fennell. (Photo: Peter Bach)

Walidah, an architecture student from Idlib, Syria, poses on the beach for a selfie with her brothers and sisters, the gentle Mediterranean lapping our shores behind her. I couldn’t help thinking of what that picture may mean to her children in years to come.

On Lesbos, I believe we have been handed a clear opportunity to – in solidarity with the migrants who reach our shores – defeat the ideologues, the murderers, the torturers and tyrants. Not with drones and bombs, but with the force of human kindness.

I see the carapace of violence that that has entombed the Middle East and Europe for 15 years crumbling as Syrians, Iraqis, Afghans and Somalis sit face to face with middle-aged women from Shropshire and Thrace serving hot tea and jam sandwiches. Rather than fearing this great migration, we should be celebrating. For us Europeans, the sweet battle of Lesbos is indeed a kind of victory. 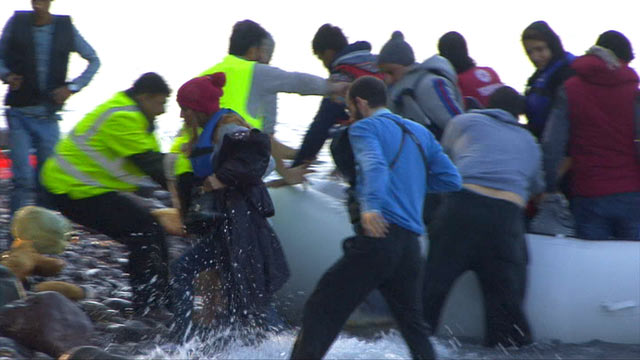 “We are winning the battle of ideas on the shores of Lesbos,” writes James Fennell. (Photo: Peter Bach)

Communicating this message to our people and political leaders is a strong and urgent priority. Both our physical security and our souls are sustained and strengthened by the welcoming of refugees in Lesbos. Yet we must ensure that this moment of victory for compassion and humanity is not followed by defeats in the countries in which these refugees seek sanctuary. In the UK, Germany, Sweden, Belgium, Holland – nearly all of the European Union, in fact – doors are closing day by day. Yet ironically, to succeed in our broader aim of defeating those whom, we are told, “threaten our way of life,” we must welcome these migrants, understand how they will contribute to our economic and political security and understand how they will take a counter-narrative back to Syria and Afghanistan in due course. Creating a conversation between our leaders and citizens and these new Europeans is essential for achieving peace. Europeans need to know that here on Lesbos, the tide of fear that has engulfed us since 2001 may be finally turning.

Refuge from Peter Bach on Vimeo. 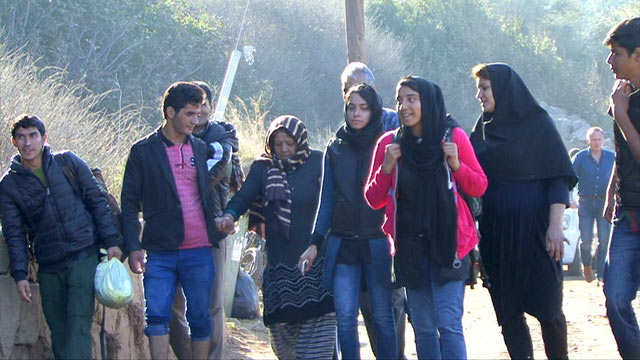 Share
Copyright, Truthout. May not be reprinted without permission.
James Fennell