In a creative protest in Nazareth in January 2015, activists from Dream Defenders and the Black Lives Matter movement conjoined their (post-)colonial anxiety transnationally with the geopolitical conditions experienced by Palestinians, reaffirming Black solidarity with Palestine, chanting “free Palestine” in Arabic and “Black lives matter” in English. The reciprocal African-American and Palestinian apprehension of the other’s suffering is accentuated in the contemporary revival of a historically present bond. Activism, primarily organized through social media, has visibly depicted the United States and Palestine as geographies of state violence, in which Black Americans and Palestinians are defined through their distance from the ethnocentric state apparatus. Israel’s 2014 war against Gaza and the simultaneous aggregation of police violence against Black individuals in the US revealed a geographically distant, yet politically shared structure of suffering that eventually intensified both groups’ transnational articulation of solidarity.

The protest against the US-Israeli production of subalternity, i.e. the socio-economic and political exclusion of populationsfrom access to hegemonic power, is vital to the “Black Solidarity Statement with Palestine,” published in August 2015, in which Black activists reaffirm their “solidarity with the Palestinian struggle and commitment to the liberation of Palestine’s land and people,” “wholeheartedly” endorse the Boycott, Divestment and Sanctions movement against Israel, and characterize the Palestinian struggle “as a key matter of our time.” The statement’s historical contextualization of the Nakba, and its discussion of occupation, refugees and the denial of rights reveals “connections between the situation of Palestinians and Black people,” who are both victims of “terror.” The statement correlates the state-sponsored violence against both groups, when it outlines Israel’s imprisonment of Palestinians and the mass incarceration of Black people in the US as identically informed forms of physical containment, and when it further criticizes the shared training of police and soldiers from the US and Israel. As the maltreatment of Palestinians “would be impossible without the US defending Israel,” the statement clearly makes the US responsible for financially and ideologically facilitating the subjugation of the Palestinian people.

While protests for (and against) Palestinian rights do take place on US streets, much of mutual recognition and empathy is expressed within online spaces that provide a necessary extraterritoriality for the formulation of agency and resistance. Black-Palestinian alliances appear as an imagined community whose existence is constituted by the comparison of both groups’ conditions based on the inherent connection and mutual support of the systems that oppress them, hence revealing the transnational alliance of hegemony and state violence, while transcending national, racial, ethnic and religious categories among the subjugated populations. The interchangeability of Black and Palestinian experiences which is implied in those articulations of solidarity offers possibilities to understand the condition of subalternity itself as a concept dissociated from geographic locality and national identification. Therefore, transnational formations of subalternresistance inevitably encompass the often overlooked Indigenous struggle in the US which significantly relates to the struggle of Indigenous people of Palestine. The Native American and Indigenous Studies Association (NAISA) declared their academic boycott of Israel as a resistance to “the colonization and domination of Indigenous lands via settler state structures throughout the world.” Kēhaulani Kauanui argues that the links between settler colonialism in the US and Israel are “not merely analogous,” but rather “shaped from many of the same material and symbolic forces.” She claims that the presence of US settler colonialism, occupation and both legal and de facto apartheid explains why the US administration never condemn Israel, as “[t]o do so would call into question the entire US American project.”

As supposedly isolated cases of human rights violations and state violence are remapped onto a transnational dimension, the experience of dispossession, dislocation and disorientation surpasses national frameworks. Consequently, the transnational linking of othered populations threatens the state-sanctioned aim of intra-national containment of struggles in time and space.

As the history and memory of suffering with racist hegemony is constantly evoked in Jewish-organized civil rights protests, the contemporary plight of Black Americans and Palestinians is highly supported by a rapidly evolving anddynamically agitating Jewish left in the US and beyond. Joining Black and Palestinian manifestations of resistance, Jewish Voice for Peace (JVP) clearly outlines the significance of Islamophobia for the hegemonic relation between the US and Israel, arguing that “unwavering support of Israeli policies contributes to the characterization of Muslims and all Arabs as the ‘enemy’ and to the perpetuation of Islamophobia.” Considering Islamophobia as momentous in “building and sustaining public and USgovernment backing for Israel,” and state-sponsored “anti-Palestinian policies adopted and promoted by the US government,” JVP launched a Network Against Islamophobia, pledging “to stand with our Muslim brothers and sisters.” JVP’s commitments for Hanukkah 2015 suggest ubiquitous commonalities in both the experience of subalternity and the performance of hegemony, as the organization condemns “anti-Muslim and racist hate speech and hate crimes,” state surveillance, racial profiling and institutionalized racism. The statement challenges state-sanctioned anti-Black violence and protests the use of Islamophobia and anti-Arab racism to justify Israel’s violence against Palestinians. 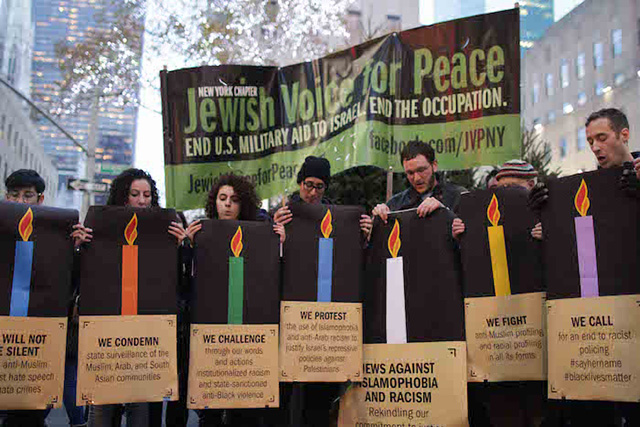 Following Israel’s 2014 war against Gaza, 40 Jewish Holocaust survivors and 287 descendants of Holocaust victims voiced their alarm over the “extreme, racist dehumanization of Palestinians in Israeli society,” in an open letter in The New York Times, “condemn[ing] the massacre of Palestinians in Gaza and the ongoing occupation and colonization of historic Palestine.” The signatories draw an explicit link between the hegemonic power of the US and Israel, condemning the US for “providing Israel with the funding to carry out the attack, and Western states more generally for using their diplomatic muscle to protect Israel from condemnation.” Warning that “[g]enocide begins with the silence of the world,” the statement appeals to humankind in general, asking that “[w]e must raise our collective voices and use our collective powerto bring about an end to all forms of racism, including the ongoing genocide of Palestinian people.” The plight of the Palestinian people is transnationalized when the statement demands that “[n]ever again must mean never again for anyone!” This writing represents a strong manifestation of transnational solidarity formed out of the de-nationalized andde-racialized perception of subjugation and based on historical comparisons and actual experiences and memories. Foremost, the statement humanizes Palestinians.

These verbalizations of activism, particularly the outspoken Black-Palestinian-Jewish triangulation of critical social inquiry, represents the potential to a counter-narrative that strives for racial justice. Solidarity displays the possibility tograsp subalternity as a transracial and transnational concept as well as an offer for dialogue in which state violence, apartheid, slavery, genocide, ethnic cleansing and other forms of racial violence are countered by a civil society which, through its transnational and transmedia conditions of being, provides participation for those who are deemed voicelessand faceless in the public sphere.

As Angela Davis, who engages with Jewish Voice for Peace for Black and Palestinian rights, proclaimed,

Just as we say ‘never again’ with the respect to the fascism that produced the Holocaust, we should also say ‘never again’ with respect to apartheid, in the southern US. But that means, first and foremost, that we will have to expand and deepen our solidarities with the people of Palestine. People of all genders and sexualities. People inside and outside prison walls. Inside and outside the apartheid wall.

Share
Copyright, Truthout. May not be reprinted without permission.
Denijal Jegić
Denijal Jegić is a doctoral researcher based in Frankfurt, Beirut, and Toronto. His work focuses on Transnational and Arab American Studies. Twitter: @denijeg.
Truthout
Share
Reproductive Rights